As Nate Myles began to forge a rugby league career in Sydney there came a time when his mother, Janet Evans, would dread the trill of the phone ringing.

Having grown up in Gordonvale in north Queensland where his most serious misdemeanour was not making it home before dark each afternoon, the freedom of being some 2,500 kilometres from home and the excitement Sydney offers young people saw Myles drawn into temptation more often than his mother would have liked.

Now, within reach of 200 NRL games, 26 Origin appearances for Queensland behind him and nine Tests for his nation, Ms Evans says it is not the player but the man Myles has become that she is most proud of.

As the game celebrates Women in League Round this weekend, few embody the spirit of what women bring to the game than Ms Evans.

Having grown up watching her father play Aussie Rules on Saturday and rugby league on Sunday, Ms Evans jumped at the chance to play rugby league for the one year it was offered at Gordonvale Primary School in the 1970s before going on to become an accomplished swimmer who once narrowly missed representing Australia at the Olympics.

The family home was opposite the Southern Suburbs junior and senior rugby league fields and she still goes to watch Nate's older brother Callan play today as well as making sure she attends every State of Origin match in which Nate plays.

Ms Evans would drag Nate out of bed as a youngster to help prepare the local pool for which the family ran for more than a decade but it was the off-field indiscretions Nate committed earlier in his career that caused her the greatest grief.

"I had more trouble with him when he started playing football down in Sydney than I did when he was here," Ms Evans told NRL.com. "It was a case of, 'Oh my God, the phone's ringing, what is it this time?' They didn't have time [growing up] to do too much wrong that I knew about.

"Most other parents don't know what their kids get up to but when you're in the limelight everybody knows and everyone's got something to say.

"Of course I worry about it but I think he's turned a big corner. They say what doesn't kill you makes you stronger and it certainly has with him.

"I'm always offering advice to people now because there isn't much we haven't been through and will continue to go through considering he's in the limelight all the time."

For Myles, his mother Janet is one of three women in his life who have been incredibly supportive of his football dreams and aspirations. 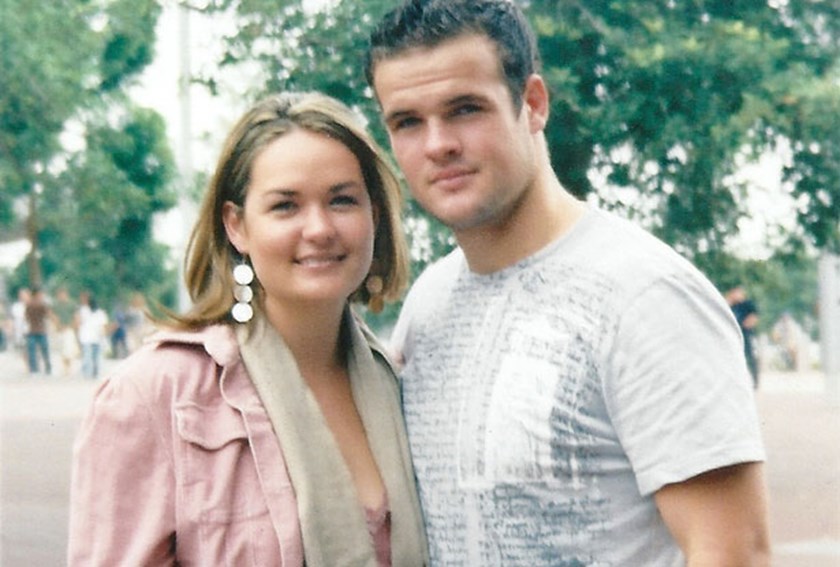 Elder sisters Riley (pictured above) and Jordan watched him play from the age of five – "There are not many games that Riley has missed" according to Myles – and wife Tessa has brought balance to his life, even if her rugby league knowledge was limited when they first met.

Injuries are part of every footballer's existence and for Myles they started early. He suffered from Osgood Schlatter's disease – or growing pains – and it was his mum who would calm him down by rubbing his legs in the middle of the night.

"Late at night I used to wake up in tears and stuff like that," Myles said. "She always used to be the one to have to deal with that which now, as I'm older and I realise how important sleep is, it would be annoying as all hell to be woken up with a kid who has an ache in his shins but she was fantastic.

"She was a bit vocal on the sidelines. A couple of times I told her not to [yell out] but I think it lasted about three minutes but she really enjoys her rugby league. I'm very lucky that I've got so many rugby league-mad women in my family."

Now Myles is headed back to Sydney on a new adventure with the Sea Eagles but he does so a much different man than that which joined the Titans four years ago.

In an off-season where the Titans threatened to tear themselves apart with a litany of off-field issues and financial difficulties, Myles remained stoic in support of not only his club but his wife Tessa as she battled Hodgkin's lymphoma.

It's in times of crises that true character shines through and given all her son has been through in the past six months, Ms Evans is incredibly proud of the man he has become.

"I don't think I ever once in my life ever had to make my boys go to football; they loved it," she said from Cairns where she now runs a swim school.

"I loved the team sportsmanship, the fact that they had to rely on each other and if they didn't turn up and play their game properly they let their whole side down.

"It's just a good, hard game and you've got to be tough to play it.

"I know these things happen to people that can handle it but to keep backing up every day and doing the job he had to do as captain of the Titans and all the responsibilities that go with it and to have Tessa so sick and to hurt so much when you can't fix her, he did an amazing job.

Hynes backing up gets one