Off the boot of star five-eighth Jarrod Mullen, the Newcastle Knights have emerged victorious 30-2 over the Gold Coast Titans to end a six-game losing streak.

Dominating proceedings with his kicking game, Mullen's try and try assist were instrumental as the Knights won only their second game in 12 attempts – and their first since Round 10.

Helping them greatly was the Titans ill-discipline, with the Gold Coast making 16 errors and completing their sets at a rate of 54 per cent, in a performance which saw the Knights leapfrog them on the Telstra Premiership ladder.

Sadly Knights centre Dane Gagai failed to finish the game after being sent to hospital with an irregular heartbeat.

A Daniel Mortimer penalty goal in the 10th minute was the first (and only points) scored by the Titans, with the Knights managing to overcome a lopsided penalty count and a concussion to hooker Tyler Randell to score the first try of the game.

Newcastle captain Kurt Gidley would jump above the rest, particularly Titan Josh Hoffman, to hold on to a Jarrod Mullen bomb and score the first try of the game in the 24th minute. From there Newcastle unleashed.

Knights prop Korbin Sims looked to be denied for the third time in the game in the 27th minute upon being held up over the try-line. Sent upstairs as a no try by referee Gavin Badger, it was ruled the Titans ended stripped the ball from Sims which allowed winger Jake Mamo to jog past the tackle and put a hand on the ball untouched.

Unlike his brother, Tariq Sims had no problem scoring in the 33rd minute when he was able to dive on a cheeky Mullen grubber to help the Knights to a 16-point lead. A penalty conversion from halfback Tyrone Roberts right on half-time ensured the home team headed into the sheds up 20-2.

A James McManus line break kicked off second half proceedings which allowed him to draw in Hoffman for Mullen to score his first try of the season in the 43rd minute.

Hooker Danny Levi was next to score, burrowing his way over from dummy-half in the 55th minute to help the Knights extend their lead to 28.

Despite their attacking flair, coach Rick Stone was more pleased with his team’s defence.

"Particularly defensively. If you look at our last few weeks we have leaked some points and I know Titans aren't going the greatest either but at least there was some resolve there, and some intent and desire in what we did defensively," Stone said.

"To keep the opposition to two probably suggested something went alright on the defensive side of things. We probably could've been tidier at the back end of the game when we had a glut of possession and had a bit more patience possibly but overall it's good to get the win.

"We have been banged up for a while and haven't played as well as we would've liked but they showed there's plenty of spirit and desire in the club and we still want to do something with our 2015 season." 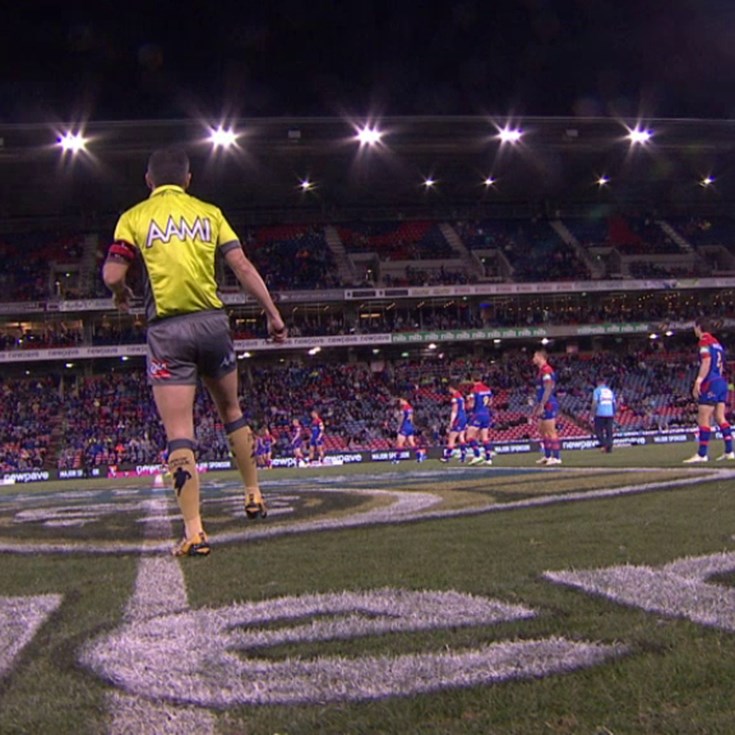