Andrew Voss takes a look at the exciting start of the 2016 season, a rookie's NRL debut to remember and gives his thoughts on the Cowboys going back-to-back.

How good has the start to the season been?

I'm declaring the opening three rounds of the 2016 NRL Telstra Premiership as the most intriguing and exciting start to a season we've had in recent memory, and maybe ever.

Am I going over the top?

Here's the basis of my case.

That only one side (Melbourne Storm) is three from three emphasises just how close the season is likely to be. And if Cronulla can beat Melbourne on Monday night (and I think they are a reasonable chance), we'll have no side with a perfect record in the opening month.

Was the reaction over the top to Te Maire Martin's debut?

From his very first run where he stepped past some good defenders, Martin stamped himself as something special.

For mine, Martin didn't need the fairytale finish to have his debut rated as very impressive, but the fact is he was on the spot in two big moments.

That a player like Jamie Soward, who has kicked 26 field goals in his career, should put trust in the 20-year-old to take the shot to win the match was some play.

Now, I can't see how coach Anthony Griffin can pick his best and most dangerous Panthers 13 without Martin in it.

Should we play more games at the SCG?

I think two per season would be the right number but that of course is up to the clubs.

Sunday's game between the Dragons and the Rabbitohs, marred by heavy rain, will be our only visit to the former headquarters of rugby league in 2016.

It is still a special place, but all the feedback I get from fans is that it is by no means a great venue to watch rugby league at.

I suppose we have to keep in mind now that the Sydney Swans have locked in the SCG as their exclusive home venue, but having said that, how can you support  any new stadia policy when you have major venues like this one only being used a dozen times during a football season?

Are the Cowboys better or worse in 2016?

I think there are some signs they are going to turn out better, and maybe that run of premiers failing to go back-to-back will come to an end.

The big thing for me out of the 40-0 victory over the Roosters in Round 3, was that Paul Green's team achieved such a scoreline without Johnathan Thurston playing anywhere near a dominant role. That was the best I've seen their bench forwards play. Lachlan Coote was exceptional at the back. And you won't see a better pass thrown this year than what Michael Morgan came up with for the final try.

Golden Point hasn't got any better, has it?

It's still exciting, but if all we're going to see is field goal attempts, and plenty of bad ones as we did in Newcastle, then I am convinced more than ever we need to have a better solution to deciding games tied after 80 minutes.

It was comical at times. Trent Hodkinson's first attempt hit the back of his 'blocker' Tyler Randall.

There was no way Jarrod Mullen was on side when Sam Williams took his shot in the 87th minute.

It was 10 minutes of dummy half and one out running, a bad scrum, a 52 metre shot at penalty goal, plenty of confusion, but I'll at least concede plenty of tension.

How exciting will Round 4 be?

Has there ever been an Easter weekend of rugby league better than what we have coming our way?

There is not a single game without a big storyline going into it.

Big crowds and massive television audiences should be in order. I feel so lucky to be calling three of the matches for Fox Sports starting with the Bulldogs and the Rabbitohs on Friday, the desperate Roosters and Sea Eagles at Allianz on Saturday, and then a blockbuster on a super Monday between Wests Tigers and the Eels. 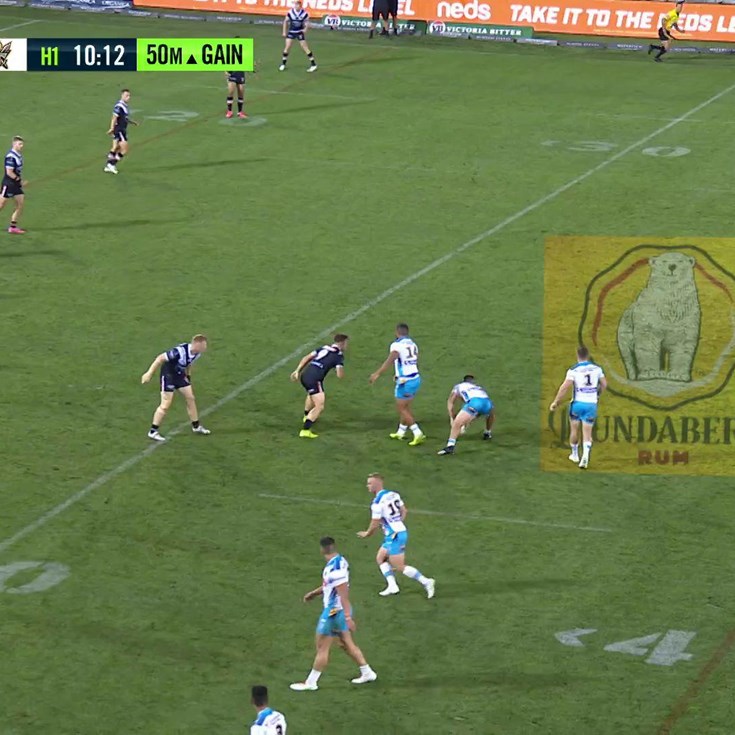 Fermor steadies the ship for the Titans

Simpkin works hard and gets his first NRL try