The big – and incredibly disappointing – news this week was that popular Manly veteran Jamie Lyon will be denied a farewell match on his beloved home turf by a niggling hamstring injury.

For the laconic Wee Waa product – who casually dropped the news he would be pulling stumps on a decorated 16-year career while speaking at a routine mid-week media opportunity earlier this year – it's almost fitting that he'll wander off into the sunset without an enormous "last game" fixture.

Lyon's never been one for pomp and fanfare and he seemed the least affected of anyone when the club announced the news this week. Nevertheless, the 34-year-old dual premiership-winner will be on hand as his injury-ravaged club looks to claw out a few more wins in a tough 2016 season against a Canberra juggernaut that has only gotten better over the course of its impressive eight game winning run.

Manly simply couldn't match it with an impressive, ladder-leading Storm outfit at Brookvale last week in going down 38-18. Their penultimate game of the year is their last at Brookvale and the last chance the home fans will get to farewell Lyon, who will be presented (no doubt a little grudgingly) to the crowd.

Coach Trent Barrett has named centre Dylan Walker to make a shock return from a shoulder injury pushing Brad Parker out of the side with Brayden Wiliame shifting to the wing. Api Koroisau also returns at hooker shifting Matt Parcell to the bench and Blake Leary to 18th man.

It's all onwards and upwards for the impressive Raiders though, who despite giving up a fast start to the Eels were comfortable 28-18 winners on the back of a second-half Jarrod Croker masterclass that helped winger Brenko Lee to a four-try haul.

Lee finds himself in the unusual position of being dropped after scoring four tries, as he makes way for his cousin Edrick's return on the left wing. Hooker Josh Hodgson is back from suspension in place of Adam Clydsdale and Paul Vaughan makes a timely injury comeback at prop in place of Junior Paulo (ribs).

Watch out Sea Eagles: Watch out for plenty as far as this potent Raiders side is concerned but as far as specific threats go, we can't go past skipper Jarrod Croker.

The 25-year-old sliced through for the try that started the comeback and had the Eels' right side defence in all sorts of bother as he set up three of Lee's four tries. Despite an off day with the boot, his eight-point haul was still enough to move him past Clint Schicofske to claim the record for most points in a season by a Raider, which now sits at 248 and counting.

Watch out Raiders: If Manly are to spring an upset here they'll most likely have to do it on emotion. Lyon won't be telling them to do it for him but you can bet it will be on the players' minds. From Daly Cherry-Evans to Jamie Buhrer to Jorge Taufua and the dynamic young Trbojevic brothers, there are no shortage of Sea Eagles who've spent their whole first grade careers under Lyon's mentorship who will be desperate to send him out with some happy memories.

Key match-up: Tom Trbojevic v Jack Wighton. The enigmatic Wighton's season has mirrored Canberra's in a way and while the Raiders have plenty of contributors week to week, it's no coincidence that their best form as a team has coincided with Wighton's best at the back. An awful intercept to cost them a game at Kogarah back in Round 10 may have been the turning point for Wighton, who has largely gone from strength to strength since.

And another emerging Blue who has spent time in Origin camp will face off against Wighton in the shape of young Trbojevic, and whereas Wighton may one day find himself in a Blues jersey, Trbojevic simply will – sooner rather than later. Trbojevic too finds his own season mirroring that of his club's – strong for a period before the injuries started to pile up and the season faded away. The Mona Vale junior desperately needs an ankle cleanout but is bravely soldiering on for the needs of his team, but don't underestimate what he is capable of – even on one leg.

The History: Played 50; Sea Eagles 30, Raiders 19, Drawn 1. Canberra's last trip to Brooky was a horror 54-18 drubbing back in Round 8, 2014, when Daly Cherry-Evans ran amok. They haven't won at the venue since edging a 24-22 win in 2010, with four straight losses since then. While the past four overall meetings are split two apiece, the last eight contests find a 6-2 advantage held by Manly.

What are the odds: The Raiders have been the best backed side of the entire round and account for 98 per cent of all money bet on the game with Sportsbet. Canberra 13+ is holding more money than all of the other margin options combined. Latest odds at Sportsbet.com.au

The way we see it: With hooker Josh Hodgson – who was badly missed last week – back to bolster a line-up that is missing very few players with all its big guns in form, Canberra look very hard to stop at the moment. Manly are at the direct opposite end of that scale, with as much salary cap in the casualty ward as on the field. As such it's tough to see them getting the better of the Green Machine here so we'll take Canberra to continue their run by 12 or more. 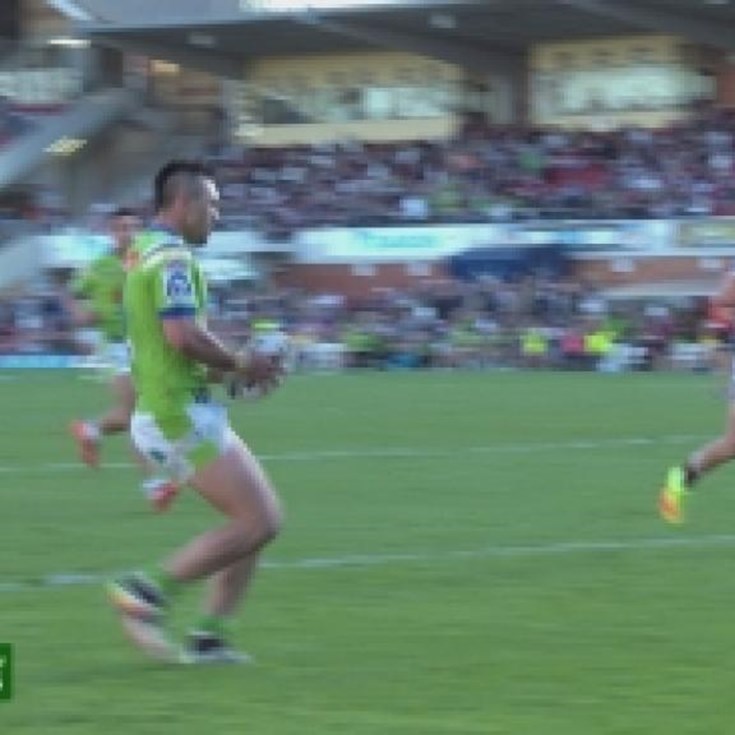