A Matt Moylan field goal three minutes from full-time has guaranteed the Panthers passage into the Telstra Premiership finals series and left the Titans hanging by a thread after a pulsating clash at Cbus Super Stadium on Saturday night.

The Panthers continued their point-scoring ways with a dominant first half that saw them take a 14-0 lead into half-time but they had to contend with a resurgent Gold Coast outfit in the second half before triumphing 15-14.

Having looked largely ineffective in attack for the first 40 minutes the Titans surged back into the contest on the back of interchange forward Leivaha Pulu and levelled the scores through a Tyrone Roberts penalty goal five minutes from full-time.

With the largest ever crowd for a Titans-Panthers clash of 18,288 roaring the home side on a chip from Roberts for Jarryd Hayne on halfway handed Penrith possession and territory as the clock wound down.

A Tyrone Peachey bust put Penrith in position and their captain stepped forward and coolly potted his third field goal of the season three minutes from full-time to secure the Panthers' most important two points of the season.

The win takes Penrith to 30 competition points and while they remain in seventh position heading into Round 26 they do so safe in the knowledge that their place in the finals is secure.

The failed chip late was one of a number of costly errors that continually slowed the momentum the Titans created for much of the second half.

Nathan Peats grubbered close to the line on the third tackle to gift Penrith possession and Konrad Hurrell made a mess of the play-the-ball after one of his bullocking charges in Penrith's end of the field.

The momentum generated by offloads in consecutive plays put the Panthers in attacking position early in the contest and with time on their side, half Nathan Cleary hit Matt Moylan wide on the last tackle and the skipper stepped back and sliced through on the angle to open the scoring after eight minutes.

A second Panthers error gave the Titans a set start inside Penrith's half but after appearing to have earned a repeat set had the decision over-turned by the Bunker and Penrith awarded a scrum 10 metres out.

Five tackles later they scored through Waqa Blake and quickly owned a 12-point advantage through 18 minutes.

The peerless power the Panthers possess across the park was on display again rom the next set, Matagi and Latu punching holes in the defence and asking the Titans to start their set from centimetres in front of their own try-line.

A penalty piggy-backed the home side up field and having saved the day at the other end, Josh Hoffman came within centimetres from scoring from a Tyrone Roberts bomb wide out.

Blake – and a good portion of the crowd – thought he'd scored a second in the 24th minute when he dived on a loose ball and raced 90 metres only for referee Grant Atkins to bring it all the way back for Jarryd Hayne having been taken out without the ball.

The Titans committed the same sin when Zeb Taia took Moylan on suspicion, Cleary's penalty goal from 32 metres out extending their lead to 14 points 13 minutes from half-time.

After two weeks in the Intrust Super Cup the injection of Pulu late in the first half brought with it a much-needed energy boost for the Titans and his powerful runs were rewarded five minutes into the second half with his first try in the top grade.

His charge at the start of the next set earned a penalty and put his team back on the offensive but the resilient Panthers defence held firm for three consecutive sets and then forced Greg Bird into error before receiving a penalty.

Bird, who threw himself into every tackle like it was his last including a head clash with James Fisher-Harris that forced him from the field prior to half-time brought out the telescopic try-scorer with 12 minutes to play to finally make the Panthers pay for their high error count.

When Chris Grevsmuhl was penalised for a high shot on Ryan James five minutes from full-time Titans five-eighth Roberts stepped up to level the scores but it was Moylan who finished off a superb individual performance with the match-winning one-pointer. 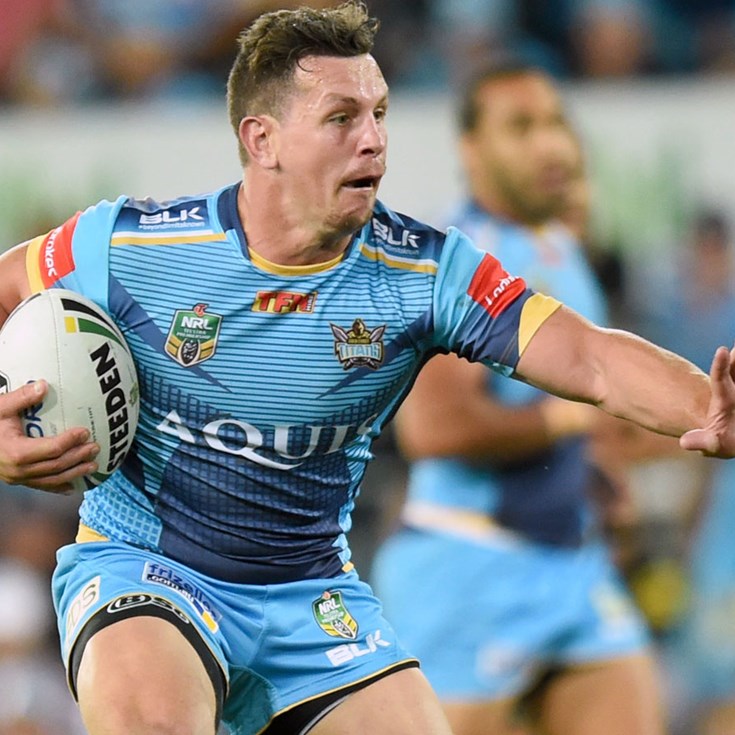