A point-scoring blitz in the final 10 minutes has helped Parramatta overhaul a 22-10 deficit to stun Wests Tigers 26-22 at ANZ Stadium on Easter Monday despite a huge effort from likely future Eel Mitch Moses.

Moses was in fine form early, parting the Eels for a try and passing and kicking well while fullback James Tedesco notched his best game of the year with a stunning 12 tackle busts and 257 metres.

But after looking out of the contest with a quarter of the game left the Eels sparked into life on the back of centres Michael Jennings and Kirisome Auva'a each putting in their best efforts of the season to date, while fullback Clint Gutherson proved his all-round individual value in the absence of Bevan French to lift his team to a much-needed win after four straight losses.

‌Some nice ball movement saw Michael Jennings streak away for a long-range try in just the second minute. The Tigers levelled up in the 15th when some nice lead-up work from James Tedesco helped Mitch Moses score under the posts against his likely future club.

The Eels reclaimed the advantage when an awful defensive read from Kevin Naiqama allowed Kirisome Auva'a notch his first four-pointer in blue and gold before the Tigers took a 12-10 lead when Jesse Sue barged over again following good lead-up work from Tedesco out of dummy half.

A stunning chip kick from Jack Littlejohn to Naiqama stretched the Tigers' lead to 16-10 and despite a late attacking chance to the Eels there were no further points before the break.

When Matt McIlwrick bagged himself yet another dummy-half try from close range – this time wriggling out of a Nathan Brown tackle – the Eels looked shot at 22-10 with 25 minutes to go.

It took some Eels improvisation – the adventurous type that has been costing them possession more often than generating points of late – to swing the contest.

A Norman cut-out pass put Jennings in space down the left edge before the centre cut back and jinked back across-field beating several players before finding Brad Takairangi who straightened up and broke the line before kicking ahead for Auva'a to ground his second.

Norman was involved again shortly after when he produced a nice pass on the right edge to send Auva'a screaming through a gap and Josh Hoffman backed up to score. Gutherson's dead-eye conversion from the right touchline was a world away from his previous shank and edged his team to within two points at 22-20.

Some late Tedesco pyrotechnics – breaking the line and tackles seemingly at will as he caused all kinds of havoc late in the game – set his team on the attack multiple times but a combination of scrambling Eels defence and poor options from the Tigers allowed the blue-and-golds to escape.

One of those pieces of poor execution – a Moses pass fired out wide that landed at the feet of Nofoaluma – was scooped up by Jennings who streaked down the touch-line and despite a wonderful try-saving chase from Nofoaluma it amounted to a Radradra try a few plays later.

The Tigers weren't done, launching further attacking raids in the final 10 minutes but the Eels proved good enough to hang on and snap their four-game losing streak. 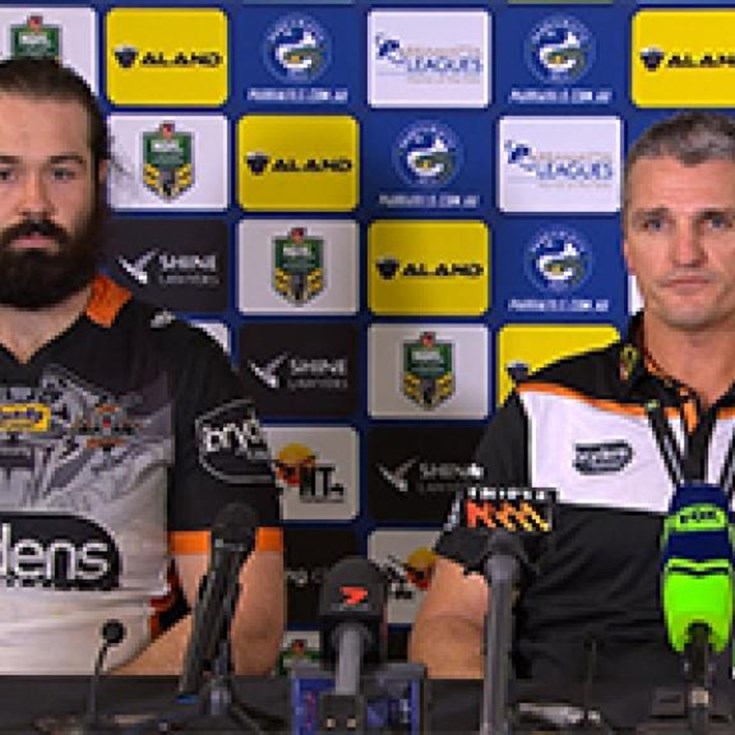 Idris right back home at centre