The Manly Sea Eagles consolidated their spot in the NRL Telstra Premiership top four with a thrilling 26-22 victory over the Warriors in Perth on Saturday.

Behind 16-0 after 17 minutes, and tied 16-all at the break, Manly struck killer blows early in the second period to gain the advantage before surviving a series of late raids by the gallant visiting side.

The Warriors started and finished the match as the better team, but in between those periods Manly picked them apart with the ball in hand, scoring three long-range tries through the middle of the park in the opening stanza before finding some luck down their right edge in the second 40 minutes.

‌
Bodene Thompson, Charnze Nicoll-Klokstad and Roger Tuivasa-Sheck crossed inside the opening quarter of the game to establish a 16-0 advantage after Johnson converted twice, with the Warriors' star No.7 laying on the final pass for the opening two efforts before Foran produced a clever kick for his skipper to dive on.

Down 16-0 and making uncharacteristic errors on both sides of the ball, Manly needed a reply and quickly got one in the shape of two long-range efforts which halted the visitors' momentum.

Apisai Koroisau broke from dummy-half and found Tom Trbojevic for an untouched run to the line for the first, before Trbojevic turned provider to put Brian Kelly over, with Matthew Wright converting both to reduce the Warriors' lead to 16-12.

A break from Daly Cherry-Evans resulted in Akuila Uate going over for his 10th try of the year and saw the Sea Eagles lock the scores at the break.

Just as the Warriors had been in the first half, Manly were quick out of the gates in the second and had the lead by the 48th minute after Koroisau put Tom Trbojevic over for his second, before another visit to the right edge 12 minutes later finished with Cherry-Evans sending Dylan Walker through for a four-pointer.

Up 26-16 heading into the final 20 minutes, the hosts allowed the Warriors back into the game after Uate muffed a regulation kick reception and Nicoll-Klokstad grabbed his second, with Johnson converting from the sideline to claw his side back within four.

Both sides blew tries in the ensuing minutes, with the NRL Bunker finding Nicoll-Klokstad knocked on during the act of scoring, before Brian Kelly fumbled with an open line metres away.

David Fusitu'a got within inches, denied only by a strong tackle from Tom Trbojevic, and with less than two minutes to go Shaun Johnson embarked on a miraculous individual run which was ultimately thwarted by some desperate scrambling defence.

The win is Manly's fifth in a row and ensures they will remain in the competition's top four heading into Round 18, while for the Warriors the defeat extends their winless record in Perth to 0-9. 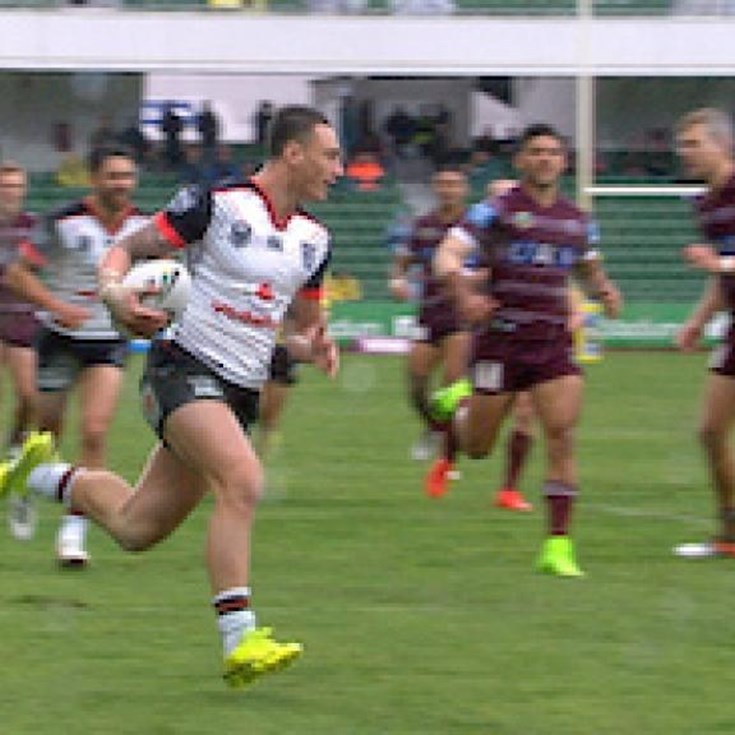