The North Queensland Cowboys have defeated the New Zealand Warriors 24-12 in a played out in the forwards, with both teams slugging it out in the middle for the 80 minutes.

‌The win keeps the Cowboys' top-four hopes alive as they stretch their winning streak to four games in a row, but all but ends the Warriors' hopes of breaking into the top eight.

Javid Bowen proved to be the difference, picking up two tries including a length of the field effort off the back of a dropped ball as the Warriors attempted a bomb to level the scores in the last minute.

New Zealand once again started fast, earning two repeat sets before a perfect pass from Roger Tuivasa-Sheck to Bunty Afoa sent the second-rower through a gap and over the line to post first points for the Warriors.

The Cowboys couldn't get their discipline under control, and a penalty in the Warriors' end prevented the home side from building any pressure. The Warriors did the exact opposite, with Foran putting a grubber to notch up New Zealand's third repeat set of the night.

The next Warriors kick was defused courtesy of Kyle Feldt's secure hands in the air. The pressure break was what the home side needed, with Mason Lino's kick going out on the full, giving Cowboys possession at the halfway mark. Michael Morgan made short work of it after that, running on fifth tackle to find Lachlan Coote who delivered a perfect pass to Justin O'Neill to score.

The momentum seemed to be going all the Cowboys' way, before a Solomone Kata strip on Lachlan Coote turned the momentum, the Warriors again handing back possession with a knock-on.

The Cowboys took the advantage when a Jake Granville grubber went between the legs of two Warriors players to pop up into the hands of Javid Bowen.

They didn't manage to take the lead into half-time after a knock-on off their restart set gifted the Warriors an opportunity which Simon Mannering seized upon, pushing through the line to bring the Warriors within two points, a deficit Issac Luke reduced to zero.

The difference in the kicking game of Morgan and Foran became apparent early in the second half, as the Cowboys five-eighth's kick rolled dead while Foran's trapped Feldt in the in-goal. The Warriors almost took a try from a deflection, but a flying Gavin Cooper came across and knocked the ball loose, giving the Cowboys a 20 metre tap.

A penalty off the back of the seven-tackle set and another penalty following that put Ethan Lowe in prime position to take the two points, which gave the Cowboys the lead. They went on the attack, but a perfect inside offload from Jason Taumalolo to Granville went to ground. The Warriors pushed back before a rare poor kick from Foran found Bowen on the full in-goal. A strong set saw the Cowboys almost go the length, but Kyle Feldt couldn't pluck the ball out of the air and it was the Warriors' turn to have a seven tackle set.

Eventually the Cowboys managed to make something out of nothing, when a close-range right side shift seemed to have Feldt caught, before he offloaded to Lowe who sprinted for the corner and secured the four points.

The forwards of both sides continued to battle it out, with both sides playing in the centre of the field until Morgan split them up the middle to push the Cowboys into strong field position. Both sides went close to scoring on multiple occasions, with Coote's field goal bouncing off the upright, while Warriors centre Kata was held up when he tried to score from dummy-half.

The game wasn't sealed for the Cowboys until the last minute, after Bowen pounced on a Warriors loose ball off a bomb and ran the length of the field to end the game and seal his double 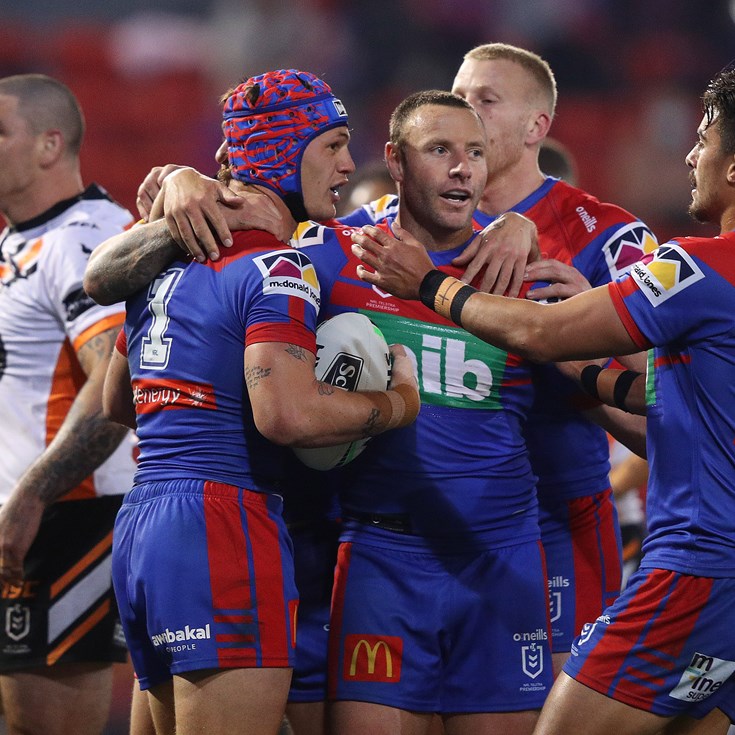 Ponga puts on a show as Knights thump Tigers

Walker on song as Rabbitohs heap more pain on Broncos