This is the story of how to change a club in 12 months.

Don’t roll your eyes. Don’t tap that app with the bird logo to send a not so polite reminder of how the Wests Tigers have won just the two games.

Yep. They’ve done nothing yet.

And those at the club will agree with you. It’s why Ivan Cleary declined the opportunity when asked to contribute to this story.

It’s why chief executive Justin Pascoe was happy to leave it to maligned chairwoman Marina Go to provide an insight into all the key decisions that have been made, beginning with the sacking of Jason Taylor one year and five days ago.

This is far more than the transformation story of a brittle football team.

The Tigers were the laughing stock of the Telstra Premiership. They were a rabble, apparently. An organisation with no idea about football, according to most.

How could they sack the coach just three rounds into a season? What sort of club were they running?

"We couldn’t afford, as a club, to have another three years of a coach say ‘if only I had this player or this player or didn’t have this player’,” Go explained as she sipped a long black at a Surry Hills café on Tuesday morning.

The Wests Tigers needed a coach that would rebuild the club from the ground up. At the time, the best in the business at doing so was filling his days juggling media commitments, mentoring his eldest son and advising NRL officials on how to improve the game.

But the Tigers knew, Cleary wouldn’t be doing so for much longer. There were rumblings around Paul McGregor’s future at the St George Illawarra Dragons, Michael Maguire was under pressure to retain his position at the South Sydney Rabbitohs, and Des Hasler was walking on egg shells at the Canterbury-Bankstown Bulldogs.

If they waited, the Tigers knew they could have missed their man.

Not to mention the increasing external pressure to retain their four best players who were hesitating in committing to the club because of the state of affairs.

The Tigers went through the proper governance procedures of interviewing other candidates, but it was just prolonging the inevitable. Cleary was always the man they wanted. He was the only candidate to meet with the board. And now we’re starting to see why.

"Before we gave Ivan the job, I spent three hours with him and he interviewed me as much as I interviewed him," Go said.

"I wanted to make sure he understood the values and cultures that we wanted. He was a step ahead of that. He was all over it. He had executed it and delivered it at other clubs. He wanted to make sure that our club had unity and the board was going to support and empower the decision making of him and our CEO. We both left that interview feeling like Ivan was meant for the club.

"Ivan’s a real culture guy. He’s brought in good men. You can see already that our team play for each other. They’re committed to this club and there’s a high-value system, and that’s because of the players he’s brought in. They’ve immediately changed the way some of the existing guys think about the concept of team.

"In the past we’ve had some players who, if you ask them what their goals are for the year, they’ll talk about their personal goals. We now have a group of people whose goal is team. Every one of those young men now, their No.1 priority is getting this club into the finals. It’s not ‘me, me, me – I want to be the best’. It’s team. That’s Ivan. He’s instilled those values into the team."

The wheels on the bus

Cleary may be the one driving the bus, but don’t underestimate the importance of the role his wife Rebecca has played in unifying a once fractured club.

Some partners and families of the players have long felt a strong disconnection with the club. There was no sense of inclusion. They felt mistreated.

Rebecca Cleary is responsible for changing that. Together with her husband, the Wests Tigers team is now far more than a 30-man NRL squad.

Whether it be hosting parties at the Cleary's Leonay home, planning team and family dinners after games, or simply organising a corporate box with a crèche for the kids during matches – this is now a club built on the foundations of strong family values.

The same characteristics that have led to Nathan Cleary earning so much praise for the way he conducts himself off the field as much as on it.

"Her and Ivan are all in. They are 100 per cent in. The children come to the games. Nathan comes to watch his dad, and his dad goes to watch his son. It’s fantastic. That’s what should happen because ultimately they are father and son first.

"That’s what I am talking about. These are values as a club we’ve wanted for the last three and a half years. The success of culture change is whether you see it into aspects like that. When I knew that was happening, I thought ‘right, we’re there. We’ve achieved what we wanted to achieve’."

"We absolutely wanted to keep them," Go said.

"And we did everything we could to keep them."

It’s hard to blame the players for their reluctance to commit to the club. Hindsight is a wonderful thing, but all they knew of the Tigers was what it was.

Yes, Cleary came in and tried to keep them. But they’d lived through that before. They’d seen coaches come and go.

Unfortunately, their perception of the club had already been altered prior to Cleary’s arrival.

The reality is they began to see a brighter future under Cleary. Those things Ivan and Rebecca have now instilled at the Tigers were the very things they wanted throughout their time at the club.

And perhaps if he’d started after the previous season, things would have been different. But by April last year, it was hard to see the forest for the trees.

"The minute it became absolutely evident they didn’t want to stay, as soon as players start standing up in front of media and not supporting your club, that’s a values proposition," Go said.

"You look at that and say ‘do we really want to have those values in our club’. ... Look at Josh Reynolds, the moment he put his toe in our club has been on about our club. He’s always talking up our club. We didn’t get that from those players, and that was before they told us they were leaving. But regardless, we did not remove them, they left."

Cleary attempted to re-focus the negotiations by pulling Mitchell’s contract off the table, which ultimately led to his departure to the Parramatta Eels mid-season.

"It was going nowhere. We were at the point where we were offering them top dollar around town, offering them as much as any other club. So if it wasn’t about the money what else did we have to do? It was becoming really stupid. Ivan’s a new coach coming in and realising he had a window of opportunity because a lot of people were off contract and he had to start making decisions around replacement players.

"He knew pulling at least one of the contracts would at least change the conversation. But the intention was to never get rid of Mitchell, it was to start having a different conversation to start renegotiating. That ended in him leaving.

"And to be honest, it’s probably been the best for everyone involved. I think so. One of the ways to get cultural change quickly is to change people. It’s harder to do in rugby league teams than in business, because fans have an emotional attachment to players.

"It’s really difficult to do that. We saw that with Robbie Farah. That was hard for us – and it was no less difficult with these three players. But you can’t wallow in it, they wanted to go so we moved on."

When will Marina Go go?

Go has been heavily criticised throughout her time as Wests Tigers chairwoman, often ridiculed because of a perceived lack of knowledge when it comes to rugby league.

But her appointment was never about rugby league.

"My goal has always been financial sustainability of the football club," she said.

"That was always my goal. Our chief executive Justin Pascoe has done a tremendous job and we can see that now. We’ll break even this year, even if we miss the eight, if we achieve what we have set out to achieve. I will have achieved my hopes for the club sometime very soon. Then I’ll look at what happens next.

There have been calls for her removal from the board since she started. Mocked, ridiculed and hammered from pillar to post for adopting a philosophy that varies to the traditional running of a football club.

In 2015, after the Tigers had opened the season with back-to-back wins, a story appeared saying Go was one of the 20 worst things in rugby league. It had the potential to make her walk away from it all, because she had vowed to throw in the towel if the role began to affect her youngest child.

"I remember looking at it and the only reason I could think of was ‘what would I know about rugby league?’. I was so shocked because it was probably the first time in my career my capabilities have been questioned. I looked at that and thought ‘oh my god’. I remember saying to my youngest son, when I was first appointed chair, I said to him at some point they are going to write terrible things about me, so I will do this until it affects you. My line in the sand would be if it affected my youngest son. If it did, I would have resigned straight away because it’s not worth that.

"I think I knew it was OK when the Alan Jones thing happened. My youngest son Lachlan was watching Fox Sports and he yelled out ‘you’re on the back page of the Telegraph tomorrow’. I ran into the room and I saw my photo next to Alan Jones with the headline ‘Go must go’. I just started laughing and so did my son. I said to him ‘does that bother you?’. He said: no. I asked why not and he said ‘because it doesn’t bother you’. I knew then we were going to be OK.”

The Wests Tigers may lose to the Brisbane Broncos on Friday night. They may lose next week as well. But there’s a hardness to a club that traditionally folds when the going gets tough that can’t be ignored.

It hasn’t been easy, but the decisions that have left many questioning the direction of the organisation now look to be paying off.

"I think we are starting to see that now. I’m mindful of the fact we’ve only won two games. Things can change quickly. We won our first two games in 2015 and that year we finished 15th. We’ve been here before. But this feels different." 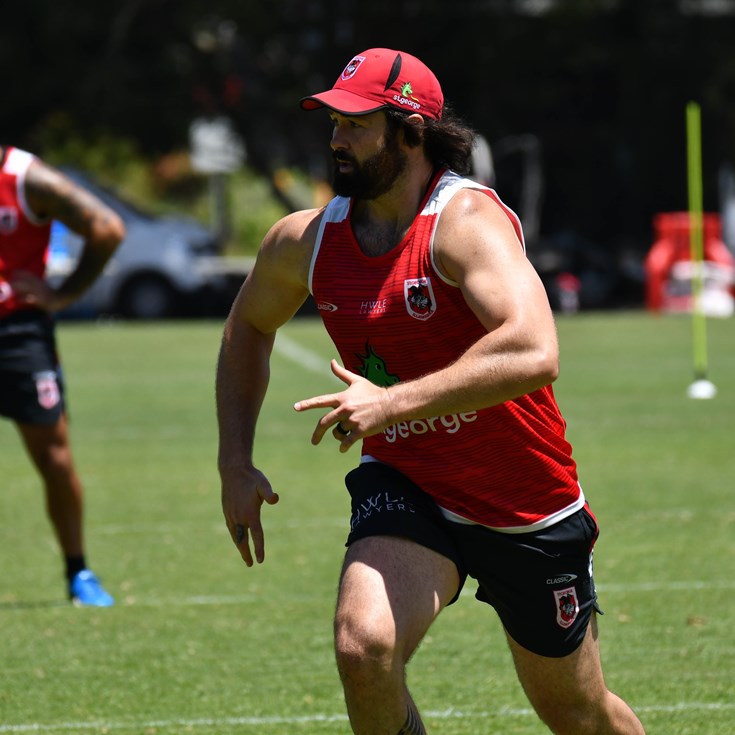 Brooks' transformation: It doesn't even feel like a game