Garth Brennan's Gold Coast orchestrated one of the biggest upsets of the season on Easter Sunday, humbling the Brisbane Broncos 26-14 at Suncorp Stadium.

The Sea Eagles also impressed, outclassing Canberra 32-16 at Lottoland to comfortably sit in the top eight.

A points spree is on the cards, with both squads boasting plenty of attacking talent.

The selections: Dylan Walker is a massive inclusion for Manly, with the centre poised to start his first game of the season after breaking his leg last September when representing the Prime Minister's XIII against Papua New Guinea in Port Moresby. Frank Winterstein will be in the second row, with Curtis Sironen out for the year after rupturing his ACL.

The key match-up: Ash Taylor v Daly Cherry-Evans. The two gun halfbacks square off in a mouth-watering personal duel. With Cooper Cronk officially retired when it comes to State of Origin selection, both players can show Queensland coach Kevin Walters they are a viable option to wear the famous Maroons jersey.

For the Titans to win: Feed the ball to winger Phillip Sami. He was electrifying versus the Broncos, nabbing a hat-trick in the boilover. The Goodna Eagles junior is only 20 years of age and has a massive future if he can stay injury free.

For the Sea Eagles to win: Let Cherry-Evans show his class. His teammates in the engine room need to lay the platform, with Martin Taupau and Addin Fonua-Blake impressing up front against the physical Raiders pack. If DCE is given room to move, he will run riot.

Titans Stat Attack: Lock Jai Arrow leads the competition in post-contact metres (239). The former Broncos junior has justified the hype after moving to the glitter strip seeking more game time. Fan favourite Konrad Hurrell needs to cut the errors out of his game, with the centre producing an unwanted eight negative plays in the first four rounds.

Sea Eagles Stat Attack: One of the best features of Taupau's game is his offloads, and the Kiwi international has been a constant menace for opposing defenders. He leads the way with 17, equal with rising Wests Tigers centre Esan Marsters. Apisai Koroisau has been tackling like a man inspired, with 173 to his name.

And another thing: Ever since Daly Cherry-Evans signed a lifetime contract to stay with the Sea Eagles in 2015, it is safe to say he isn't a popular figure among Gold Coast fans, who no doubt will remind the playmaker about his infamous backflip. Watch for the classy No.7 to ignore the jeers and guide his team to victory.

The Titans have pulled a late switch with Max King promoted to the second row to replace Will Matthews, who is out of the squad. Keegan Hipgrave fills the vacancy on the bench, with Leilani Latu omitted. Jack Stockwell and Tyronne Roberts-Davis were dropped from the extended bench an hour before kick-off.

Dylan Walker has been cleared to return from a long layoff at centre, pushing Brad Parker to the wing and Matt Wright to fullback in place of Tom Trbojevic (ankle, two weeks). Curtis Sironen and Kelepi Tanginoa (both ACL, season) are out with Frank Winterstein starting in the second row and Jack Gosiewski moving into the 17. Lewis Brown and Toafofoa Sipley were omitted 24 hours prior to kick-off with Trbojevic and Taniela Paseka cut from the final squad. Brad Parker became ill after the warm-up and was replaced by Jonathan Wright.

Matches at venue: No matches at Marley Brown Oval 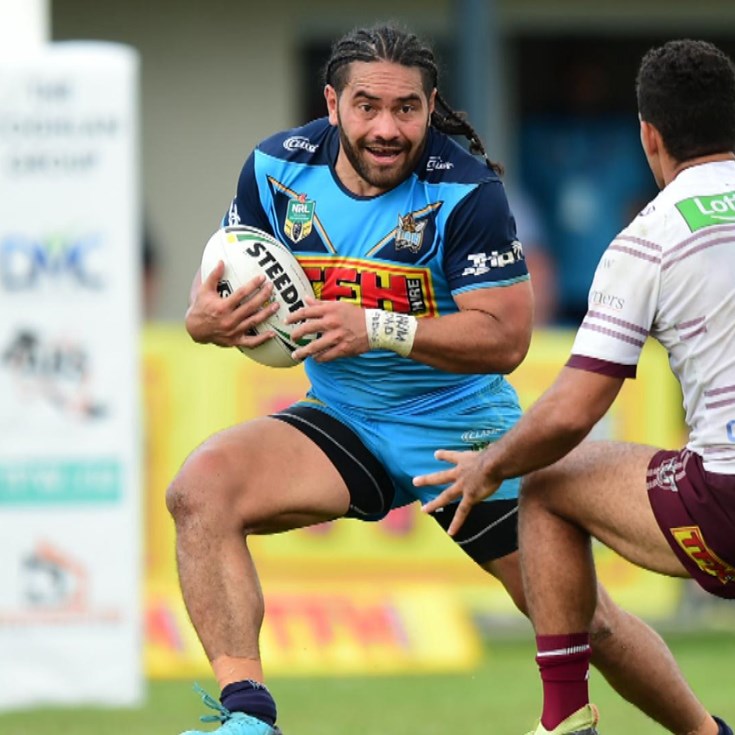