Matt Dufty has spent the first five weeks of 2018 running around defenders with the rarest of rugby league commodities, vindicating the club's call to let Josh Dugan jump the fence to neighbouring Cronulla.

Dufty's first full-time crack in the red and white No.1 has come up roses thus far, with the 82-kilo youngster packing more pace than predecessor Dugan and sweeping into attacking plays more often and ball-playing as a result.

The southern Sydney derby rolls around again as the Sharks do the same 'centre v fullback' dance that St George Illawarra two-stepped their way through last year with Dugan, a fine representative custodian in his own right, but a fundamentally different one.

The Dragons couldn't be happier with Dufty's progress thus far, but there was one moment when Dugan used his extra 20 kilos to smash the 22-year-old back into his in-goal when they last crossed paths in round two.

Enter Nathan Pickworth, St. George Illawarra's head of high performance charged with keeping Dufty ahead of the roughest contact game in the country, where 110-kilo muscle-bound monsters are out to bury him beneath the turf he's just scorched.

Over the last 18 months Dufty has added four kilos to his frame as he's risen through to first grade, while fellow gun junior Jai Field has packed 10kg onto his playing weight since commencing full time training, up to about 82kg on a good day.

They've done so without effecting their greatest asset, speed.

Acceleration off the mark is where the Dragons are focused and both Dufty and Field have since cracked an impressive max velocity of 10 metres per second, typically on show as they zoom round defenders for fun.

"The key is making sure that the muscle mass you add is functional, any dead weight is almost like a handicap for a horse," Pickworth told NRL.com

"…The thing with league players, especially Duft as an example, if you take the full 40 metres to reach max velocity, you're not going to get there because someone will tackle you before you're going flat out.

"What we pay particular attention to is acceleration, reaching top speed with the ball quicker than the defender can, because that means they're more likely to beat their defender.

"…Side-stepping, palming and being ready for a tackle, trunk strength in manoeuvring through a rugby league game is crucial.

"Duft's ability to accelerate is probably just as valuable as his actual top speed in terms of assets that make him as a player."

Twice a week over summer they put the Dragons through specific speed and agility training sessions, while running mechanics are built into a regular training hit-outs in season.

A teething problem or two has popped up with Field's rather rapid transformation, with his bulking up from 72 kilos bringing on back issues and shin splints.

Those issues have since cleared up as the 20-year-old continues to come on via reserve grade, and he and Dufty challenge as two of the quickest players in recent memory at the club.

As the Dragons play host to Dugan at WIN Stadium, the club's pet project with his successor becomes a fine balance between rugby league's most basic elements; size and speed.

"It comes down to whether they can do what the coaches want, making sure someone's not too light and getting rag dolled on the park, and maintaining or even increasing their speed at the same time," Pickworth says.

"The other thing with playing fullback that we can't ignore is the aerobic fitness needed at the back to perform in the role.

"Add too much mass on them and their fitness drops, they're not going to be as effective at their job, they won't be able to keep up.

"From what we've seen so far their speed hasn't dipped with the extra weight we've added to Duft and Fieldy so far." 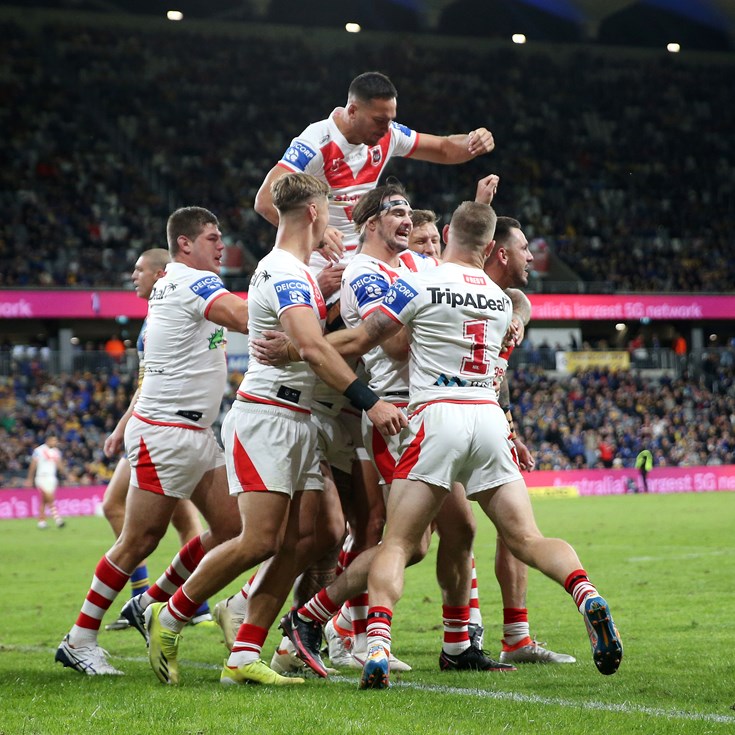