Sims, who is playing in his preferred left edge second-row role for St George Illawarra this season, stormed into NSW contention with a hit on Cronk, which forced the ball loose and won the admiration of Blues coach Brad Fittler.

Asked during the Channel Nine commentary of the match how he would stop Hunt, who is favourite to replace Cronk as the Queensland halfback, Fittler said: "Stick Tariq Sims on to him."

Sims, who was on the cusp of Origin selection in 2011 and 2015, said he would have no hesitation in dishing out the same treatment to Hunt if asked to by Fittler.

"That's footy and if I am called upon to do a job I will do it," Sims said. "If they want someone who is not going to take a backward step, with a bit of attitude and a bit of starch in defence, then I'm your guy."

Dragons right-edge second-rower Tyson Frizell, considered a certain selection by Fittler, endorsed Sims for the Holden State of Origin series and described his tackle on Cronk, which was comparable to a quarterback being sacked in NFL, as a turning point in the St George Illawarra's 24-8 win.

"That set could have turned into a repeat set and we would have been on our line again but Tariq came up with a big play," Frizell said.

"It's something in our game that you classify as a one percenter, and you don't really get recognised in the stats department.

After winning the duel with talented rookie Luciano Leilua for the starting position made vacant when Joel Thompson finalised a move to Manly in late December, Sims is fulfilling the potential he demonstrated as a 21-year-old playing outside Johnathan Thurston at North Queensland.

Since then Sims has suffered two broken legs and undergone shoulder and wrist operations, while he has had to improve his discipline after developing a poor judiciary record.

Until joining the Dragons from Newcastle midway through the 2016 season, the 28-year-old had always played as a second-rower but spent the past 18 months as a middle forward before telling coach Paul McGregor he wanted a chance in Thompson's position.

"In the pre-season, it was a bit uncertain because Joel was here until about two weeks before the season started so I just kept playing my role and floating in between the middle and the back row

If they want someone who is not going to take a backward step, with a bit of attitude and a bit of starch in defence, then I'm your guy.

"Hopefully that adds another string to my bow when it comes to the Blues squad in that I can actually play in the middle, mix it up with the big boys and then go out to the edges if the edges are a bit tired."

Asked if his job was to "hunt" halfbacks, Sims said: "It is to apply pressure to halfbacks in a legal manner."

With seven wins from their opening eight matches, the Dragons are the NRL's form team and could have as many as six players Frizell, Sims, Jack de Belin, Paul Vaughan, Cameron McInnes and Euan Aitken - in the NSW team, along with Hunt in the Maroons team.

However, they face their biggest test on Sunday at Jubilee Oval against premiers Melbourne, who thrashed the Warriors 50-10 on Anzac Day.

Meanwhile, Sims spoke out in support of his sister Ruan after she stood down as a Dally M Medal judge in the wake of criticism the co-captain of the Jillaroos World Cup winning team had been unable to watch a game live because it clashed with her own match.

"I am going to stick by my sister because she is the best big sister in the world, she has spearheaded the women's rugby league game in Australia and been an inspiration for many young girls out there," he said.

"She is upset about what has happened." 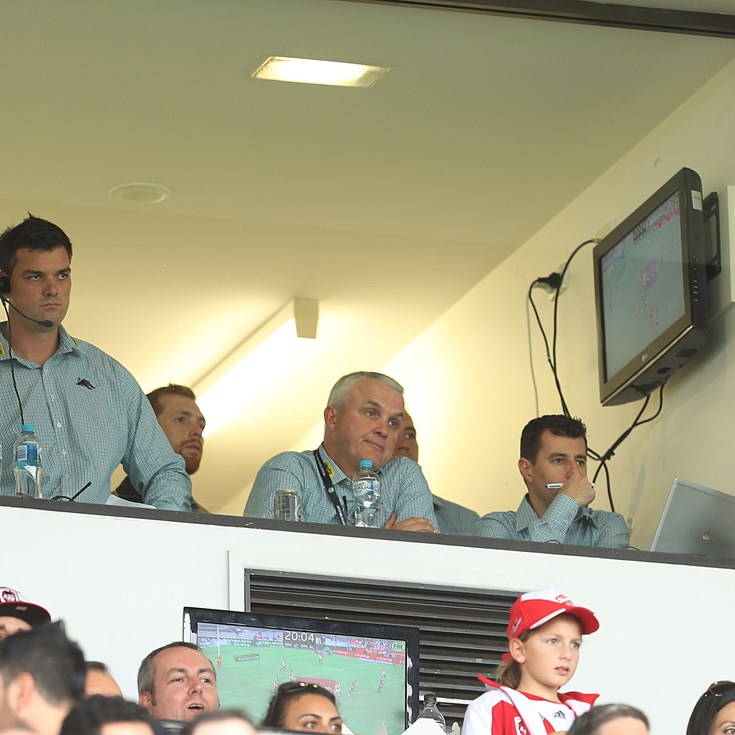 Not here for a rebuild: Griffin aims for finals berth in centenary year