They have been battered from pillar to post with injuries but Peter Wallace insists the Panthers have a window of opportunity to challenge for a third premiership if they can retain their spot in the top four.

The Penrith captain has hailed the stoic "next man up" attitude of his men which he believes will pay big dividends when the club's injured stars return.

Wallace is rightly proud of what the team has achieved under duress this year. He's hoping that trend continues against the Knights this weekend.

Young prop Moses Leota became the latest addition to a growing list of sidelined stars after partially tearing his pectoral against North Queensland in round nine.

Dylan Edwards [shoulder] and Sam McKendry [knee] have been ruled out for the season, while Tim Browne retired after a serious bowel injury. Nathan Cleary [knee], Waqa Blake [ankle] and Josh Mansour [cheekbone] remain on the sidelines.

To add insult to injury, forward Jack Hetherington will miss the round 10 clash with Newcastle due to suspension.

"Every week we seem to be losing someone but we don’t speak about it too much. The next man up has to do a job and that’s just how it is," the veteran hooker told NRL.com.

"No one makes excuses and we just move on. I am really proud of the boys and how they’ve handled it.

"Nathan was the first one to go down and losing your halfback is never easy, especially a player of his quality.

"Big Sam McKendry was going well for us but unfortunately did his knee again and Josh [Mansour] was a huge loss considering how he gets our sets started. In 2015 we had a lot of injuries but week-to-week this has probably been the worst we’ve had with injuries."

On a freezing night in Bathurst last weekend, the Panthers were confronted with a busted Trent Merrin [dislocated finger] before a ball was kicked in anger.

"That just summed it up ... losing Mez in the warm-up," Wallace grinned.

"We just can’t take a trick at the moment, but our depth is there. Our reserve grade is going really well and we have some really good young players coming through who have got a taste of first grade.

"Jack [Hetherington] has impressed me as has Kaide Ellis, and he’ll play a few more games now. Wayde Egan has gone really well each time. We’ve already had three or four debutants. We probably thought we’d have a few, but not in the first nine rounds."

Banking key Telstra Premiership points early on in the season is only going to reap rewards at the back end of the year and Wallace said a premiership "window" was ajar for the Panthers.

"If we can just hold the fort until we can get a majority of the boys back and hopefully have everyone fit and firing for the back end of the year," he said.

"This is a [premiership] window definitely and I think we’ve been building to this for a few years.

"Apart from the Dragons it is a pretty wide open comp. I believe you need to be in the top four to give it a shake otherwise it is a big hill to climb."

Wallace played the majority of his career at halfback and knows a quality play maker when he sees one. That is why James Maloney's form has blown him away.

"Losing Nathan the way we did and the way he’s stepped up…he’s been huge for us. With Peach [Tyrone Peachey] in the halves with him and more of a runner, Jimmy has had to do more of the organising and that has brought the best out of him." 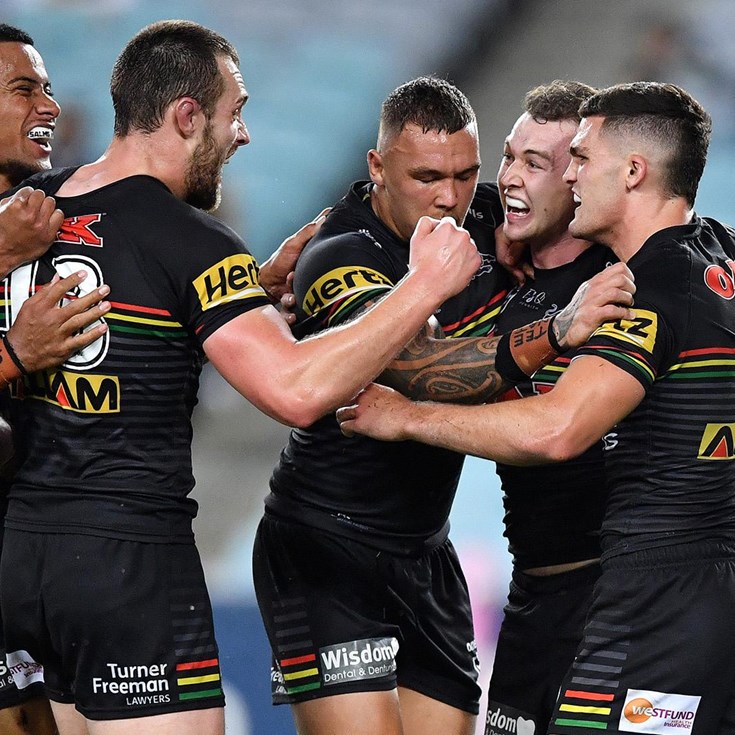 Wallace set to return in round 14 for Panthers