With Queensland heading into a Holden State of Origin series with no Johnathan Thurston and no Cooper Cronk for the first time since 2004, NRL.com Stats crunched the numbers to work out what a new-look Maroons spine might look like.

Evergreen Storm custodian Billy Slater only needs to remain injury free to get first crack in the maroon No.1 jersey after his stunning return in games two and three last year after he was controversially overlooked for the series opener. He is the busiest support player of those available and behind only form Knights fullback Ponga when it comes to creative play. He is the best fullback when it comes to organising defences not just of those available but arguably of any fullback in history. Even at the age of 34 his running game in terms of metres and busts stacks up favourably.

Boyd is next cab off the rank if something happens to Slater. Veteran Broncos No.1 has the second-most tries in Origin history and plenty of rep experience as a fullback despite not being in career-best form this year (partly due to ongoing hamstring niggles) but remains solid in defence. If not picked at fullback, Boyd is otherwise engaged in a four-way tussle for two wing spots with Val Holmes, Dane Gagai and Corey Oates.

Holmes is in his third stint at fullback for the Sharks this year in a constantly reshuffled spine and his best games have been on the wing. His one senior rep game at fullback – for Australia against Lebanon in last year's World Cup – was underwhelming but he has otherwise been sublime in six Tests and two Origins on the wing.

Ponga is the interesting one. He only recently turned 20 but statistically he absolutely laps the rest of the candidates. While he has just one try himself his nine try assists – two behind competition leader Gareth Widdop and two more than the next-best fullback in the NRL in Slater. His 11 line break assists are the most of any player in the NRL this year full stop – two clear of Widdop and Johnathan Thurston (nine each) while his 68 tackle busts is also the best of any player this year. He probably doesn't make the 17 for round one given the logjam of backs and halves but will be in the extended squad ahead of what is probably a 10-year-plus Origin career.

Munster's superb debut season last year and strong form through 2018 – plus his club combination with surefire picks Billy Slater and Cam Smith – has him at unbackable odds to be in the maroon No.6 jersey for Origin I. Comfortably leads the field for line break assists and try assists and is producing the most with his running game too (his 80 average metres are the best of any five-eighth this year behind Newcastle's Connor Watson at 86 metres per game).

Milford has slipped way down the pecking order despite starting game one last year, with scarcely an assist of any kind this year in a struggling Broncos outfit. His running game has also dropped away as he has been asked to try and learn more of an organising role.

Morgan is in a three-way battle with Munster and Dragons star Ben Hunt for the two starting halves spots and appears certain to nab the No.14 jersey if he doesn't start. His form has been patchy in a badly out-of-sorts Cowboy side but his outstanding form through last year and excellent contributions at rep level should see him safely into the 17.

Norman is very much the long-shot; often spoken about more by fans and pundits as an Origin hopeful than by the Maroons hierarchy. Even his brilliant form in an in-form Eels outfit last year didn't appear to get him much closer to even a spot in an extended squad. With his club last after nine rounds he'd need a fair few injuries to get a look-in.

Hunt's blistering form at the table-topping Dragons should be enough to result in last year's game-three utility officially take over from Cronk and Thurston as the man to guide the Maroons around the park. His stats are solid in attack and defence with the equal-most try assists and line-break assists of any contender and he boasts an underrated running game and quality long kicking game.

As mentioned above, if Morgan misses the 6 and 7 jerseys he should nab the 14.

Cherry-Evans played six Origins over three years from 2013-15 – four of those off the bench – but appears to have fallen out of favour. His strong form in the opening rounds has slipped along with that of his team, which has lost five straight. Like Norman, he is probably more than one or two injuries away from getting a call-up.

Taylor is a gifted young halfback who starred at junior rep level and has been a standout – albeit an inconsistent one – in a struggling Titans team over the past two and a half seasons. Deceptively fast with a brilliant short kicking game, there is plenty of time for Taylor at Origin level and he looks likely to play plenty in the future but is unlikely to be in the 17 for game one this year.

NRL.com halves verdict: Munster and Hunt, with Morgan on the bench

The conversation here isn't who should or will be Queensland hooker but rather who would get the call-up if Smith were unavailable for some reason. Aside from a one-off game in 2010 in which Smith was suspended and Manly's Matt Ballin got his one Origin jersey, no one else has worn the Maroon No.9 since PJ Marsh and Mick Cocker in 2003.

Statistically, Smith is still one of the best hookers in the league with no No.9s lighting up in attack (only Manly's Api Koroisau has more than two line break assists or try assists). He is kicking and defending as well as any, even if his current numbers are down on his own lofty standards.

Next cab off the rank is certainly Broncos rake Andrew McCullough who has claims on being the best defender in the NRL full stop. He racks up more run metres than any other Queensland-eligible hooker (though is still a long way behind league leaders Damien Cook and Issac Luke). Importantly he has no problems maintaining his energy over 80 gruelling minutes week to week.

Friend has dropped one spot in the pecking order in recent seasons on the back of McCullough's steady improvement and Friend's own patchy form this year (impacted by a sternum injury) won't help his chances.

Granville would have been a better chance two years ago and while he has arguably the most dangerous running game of any Queensland-eligible hooker, the fact he does not play 80 minutes would count heavily against him.

NRL.com hooker verdict: Smith (with McCullough next cab off the rank) 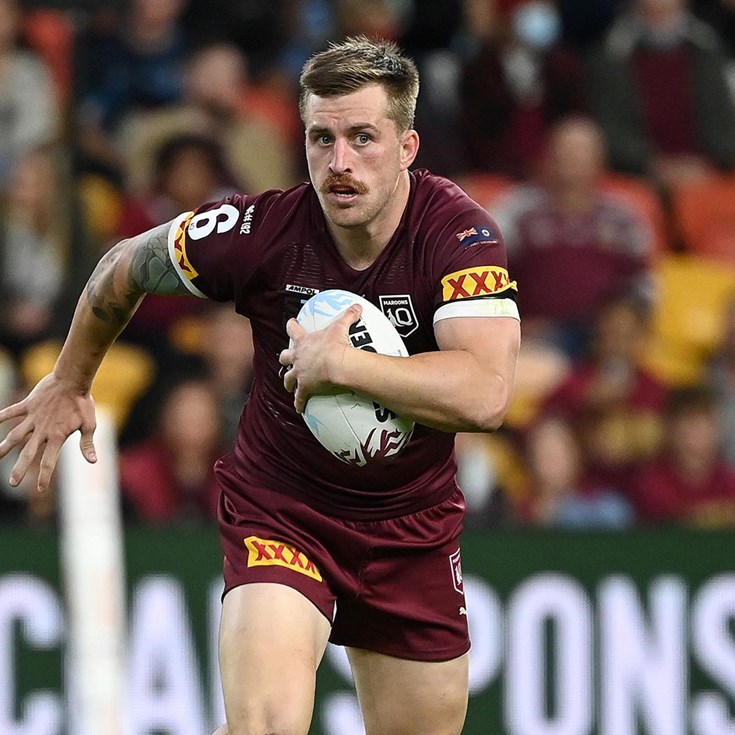