Newcastle coach Nathan Brown hopes his team can draw on the fighting spirit of former club legend Mark Hughes for inspiration, when they tackle Cronulla on Sunday afternoon in the Telstra Premiership.

Round 12 is Beanie for Brain Cancer round, raising funds and the profile for the Mark Hughes Foundation, created when the talented centre was diagnosed with the disease after his retirement.

Brown spoke highly of Hughes, both as a player and his efforts for this important cause.

"Mark Hughes is one of the club's favourite sons," Brown said.

"He has won two grand finals [1997 and 2001] and emphasises probably what the Newcastle Knights are all about.

"He was a battler who came from Kurri Kurri and did it the hard way because he wasn't a kid that was the most talented player, but he was a player who everyone wanted to play with."

The Knights will need to be at their best against the Sharks, with Brown admitting their opponents this weekend just find ways to win.

Cronulla have won their past five matches, while Newcastle have lost three successive games.

It's no secret Brown has briefed certain individuals their tenure at the club is under the microscope.

Lewis: Fifita in Origin would open a can of worms

"With Cronulla they are very greedy, and they don't give much away at all," the Knights coach said.

"Cronulla can play a certain style and win, or they can play just OK and still find a way to win.

"But for us we need to hang around to make it hard for them and then take some chances."

It has not been the ideal build up for Newcastle, after losing Brock Lamb in the Gold Coast match last weekend. Nathan Ross and Slade Griffin have both had their problems at training this week with niggling injuries.

Brown is confident Ross has overcome a slight groin injury after training on Thursday, while Griffin will be given until the final training session to overcome his ankle concerns.

Despite the disruption, and constant changes in the halves, Brown has once again backed halfback Jack Cogger, but will be looking for him to dramatically improve his kicking game.

"It is what kicks work for Jack," Brown said.

"The team has to respond. "So, his team-mates have to help him as well, if we can get that right and support and kick chase, that would also help."

Adding to the woes for the red and blue, their recent record against the Sharks isn't great.

Cronulla has won the last six clashes between the two clubs, including four of the past five at McDonald Jones Stadium - which has been renamed Beanie for Brain Cancer Stadium for Sunday. 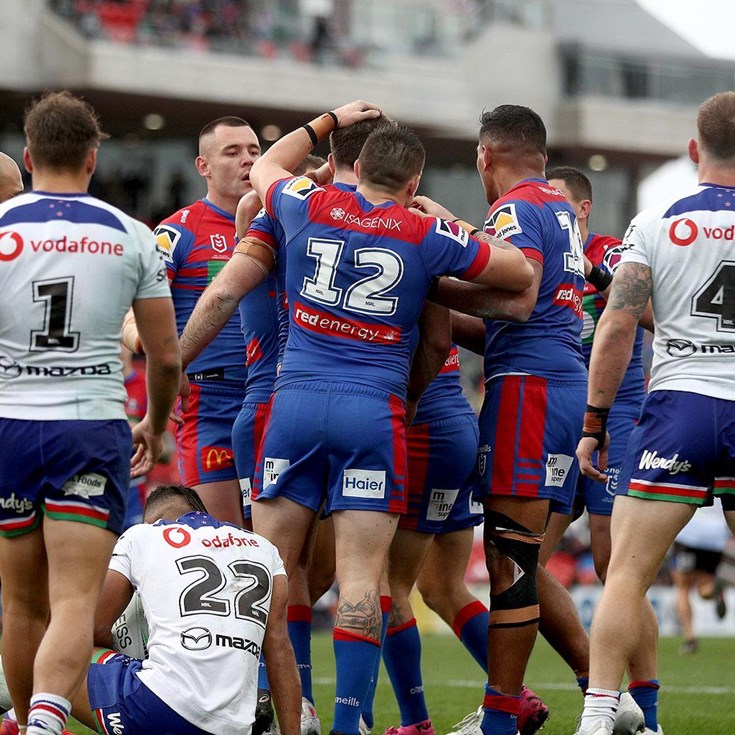