The Wests Tigers welcomed famous prodigal son Robbie Farah and new-look fullback Moses Mbye into the side on Sunday but coach Ivan Cleary said the rest of his team didn't handle the occasion well.

More than 16,000 packed into Leichhardt Oval to witness Farah and Mbye in their first outing, which was also a significant round 16 match against the visiting Gold Coast side as the Tigers try to shape a path to the NRL finals.

Both men made over 100 metres but it didn't help arrest the litany of errors that led to a 30-12 loss to the Titans.

"It was a big crowd and big occasion today and it must have got to us," Cleary said.

"You'd think as some point we'd be able to correct it throughout the game. That second half we just couldn't," he said, referring to the 12-12 half-time scoreboard.

"Any possession we had we usually gave it back and usually in an encouraging position where we'd made a half-break.

"We were looking for the big fix, the quick fix, throughout the day. You're never going to win games like that.

"The errors weren't even forced… we forced our own errors, not them."

Through the disappointment, Cleary still liked seeing Farah and Mbye in motion.

"I thought Robbie played well. He brought the boys onto the ball well… some really nice touches," he said. "It's certainly good to have him back."

Mbye worked in well with his former Bulldogs teammate Josh Reynolds on both sides of the field, renewing the combination of previous seasons.

"Pretty much every time he (Mbye) touched the ball he was dangerous," Cleary said.

"There was no problem with that... we did look dangerous, but kept turning over possession… constantly... all day."

The Tigers completed 19 sets, compared with the Titans' 35 sets.

The Tigers didn't add to their score in the second half, whereas the Titans added three more tries.

"I thought we had opportunities to right the ship but we just couldn't," Cleary said. "There's just not enough composure to be able to build pressure."

As far as finals go, Cleary is not prepared to throw up his hands yet. The Tigers lie in 10th spot but equal on points (20) with ninth-placed Canberra.

"There's still a third of the season to go; anything could happen. But we need to put out a performance that's capable of winning a game first," he said. 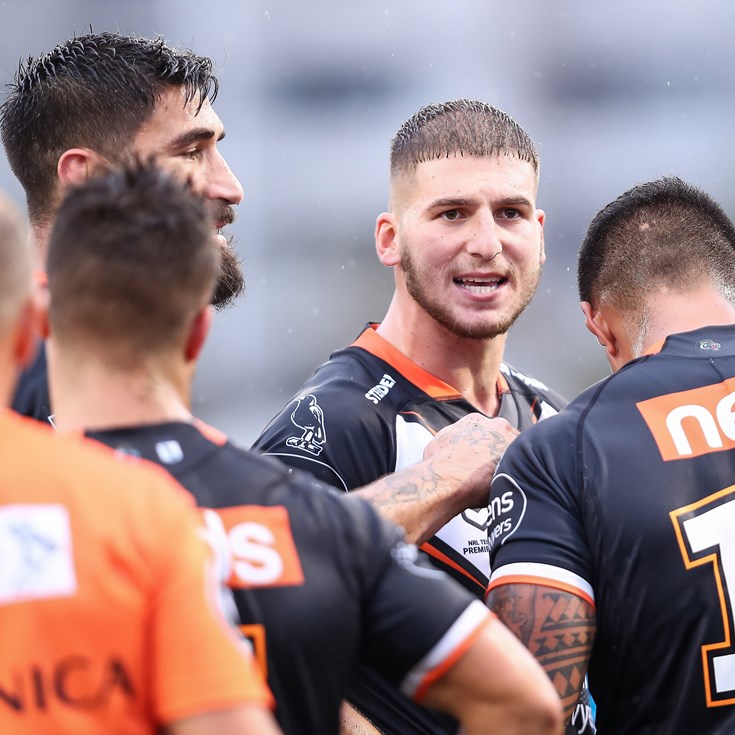 Mbye: Knee no issue as he looks to exit Tigers on right foot