If you can judge a player's future in the NRL by the good-natured ribbing he receives after a winning debut, then Canberra Raiders forward Emre Guler will be around for a while yet.

As the media spoke to the 20-year-old in the change rooms fresh of playing his part in a 14-12 upset win over the Sydney Roosters, Canberra halfback Aidan Sezer was trying to film Guler on his phone in a bid to put him off the questions being asked of him.

But much like his performance on the field, the young prop doesn't let it get to him too much as he reflected on his quality 28 minutes on the field.

"The speed was very quick, you make a tackle, and somebody is coming at you straight away. But once I got into the game I got used to it," Guler said.

In what was a crucial game against one of the best packs in the competition, the 20-year-old gave a glimpse to Canberra fans as to what he might be capable of in the future.

Ninety-three metres from 10 runs and 23 tackles gives an early indication of what the player with Turkish ancestry could produce next season, especially in the wake of fellow props Shannon Boyd (Titans) and Junior Paulo (Eels) leaving the club.

"I didn't think he looked out of place at all, speaking to Stick (Ricky Stuart) for a while now about the time to put him in and both had a chat and obviously now we've missed the semis I thought Emre came in and did a fantastic job," Canberra captain Josh Hodgson said.

"Playing alongside him his talk was very good for a young kid, he never once looked like he got dominated or it got too physical.

"I thought for a debut he should be very proud of himself and as Stick said to get a win on debut for a kid as lovely as he is, such a humble lad, it's good to put a smile on his face."

Guler's debut will not only be remembered by those close to him but the rest of the Raiders' faithful as the side broke a four-game losing streak to beat one of the competition favourites on Sunday.

The Roosters were riding high off the back of five wins in a row and now face a tougher task of finishing on top of the ladder.

Now Guler is hoping he had done enough to retain his place for the remaining two games of the season, one of which is against his junior club the Rabbitohs.

"I'm hoping I didn't look out of place I just want to stay in the NRL now and build a platform on top of that," Guler said.

"Hopefully I can play against Souths, so it would be great to play them and hopefully get a win.

"It will be exciting, it's always special to play an old club, even when I played them in the 20s there's always a bit of banter with the boys." 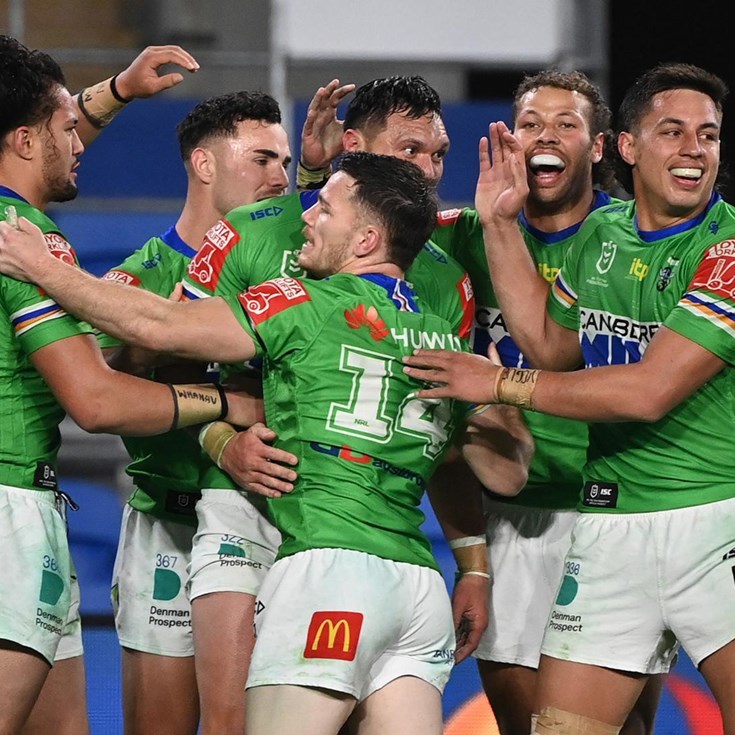