Rugby league honours the champions of 2018 at the Dally M Awards night in Sydney.

After the host of brilliant seasons from a wide range of individuals, the best in the game will be crowned.

Kalyn Ponga, Roger Tuivasa-Scheck and Damien Cook headline a strong list for the main men's award, while the likes of Brittany Breayley (Broncos), Isabelle Kelly (Roosters) and Jess Sergis (Dragons) are sure to be chances of winning the women's award.

As the night's major awards are handed out, the winner's will be posted below. Remember to hit the refresh button to keep up with all the news:

10.15pm: As far as honouring a winner goes, it doesn't get much better than this. Roger Tuivasa-Sheck was taken back as his fellow Kiwis performed a haka for him after the award was decided.

9.59pm: After a rapid-fire finish, Roger Tuivasa-Sheck in the Dally M Player of the Year. What a worthy winner he is.
''I want to thank my club, my team ... to the players who push me every day,'' Tuivasa-Scheck said.
Click here to read about Tuivasa-Sheck's win.

Of those awards, it is great to see Blake Ferguson recognised for his great year. Joseph Leilua was a suprise selection.

9.51pm: The votes for the Dally M Medal are in after round 24. Kalyn Ponga leads on 27 votes, one clear of Roger Tuivasa-Scheck and Luke Brooks. Don't forget that Ponga doesn't play in round 25.

9.42pm: Brisbane Broncos star Brittany Breayley has been named as the Dally M female player of the year. She has turned in some five-star performances during the Holden Women's Premiership. Kudos. Click here to read about  Breayley's award.

9.36pm: The votes are in up to the end of round 22 of the count for the Dally M award. Wests Tigers halfback Luke Brooks is the leader on 26 votes, one clear of both Roger Tuivasa-Sheck and Kalyn Ponga. Don't go anywhere, this is going to be close.

9.30pm: Warriors winger David Fusitu'a has been presented with the Ken Irvine Medal as the competition's leading try scorer. Fusitu'a will be remembered as the first winner of this new award.

9.20pm: NRL CEO Todd Greenberg has awarded Steve Morris the 1979 Dally M Medal, 30 years after he was initially named as winner. Greenberg also said the record books would now recognise the Dapto Canaries junior who made his name with St George as the first winner of the award. Rocky Laurie is now the second winner. That's sure to lead to dramas at trivia nights.

9.15pm: We have an update after 20 rounds of the Dally M count. Kalyn Ponga still leads (24 votes), with Luke Brooks (20) and Roger Tuivasa-Scheck (19) within striking distance.

9.08pm: South Sydney hooker Damien Cook has been named as the Provan Summons People's Choice Medal winner. After many a starring performance for the Rabbitohs and a strong showing for NSW in their Origin series win, it is hard to begrudge him this honour. Maybe after this, someone will mention that he was once a beach sprinter. We've never heard that one before.

8.53pm: Storm legend Cameron Smith already has an award in the bag, and the grand final isn't on until Sunday. The crafty hooker has been named the Captain Of The Year. A worthy recipient if there ever was done. Smith and his Storm teammates now have the Roosters to worry about.

8.49pm: South Sydney Rabbitohs coach Anthony Seibold has won the Coach Of The Year award after guiding the Rabbitohs to a preliminary final appearance. The men who led their teams to the grand final (Craig Bellamy and Trent Robinson) have missed out. At least they have a grand final to look forward to.

8.41pm: When voting for the main award went behind closed doors after round 12, James Maloney (17 votes), held a one-point lead over Kalyn Ponga, Andrew Fifita and Luke Brooks. All will be revealed over the remainder of the night.

8.37pm: Brisbane Broncos winger Jamayne Isaako has been named as the Rookie Of The Year. A deserved winner after making a wing spot his own during 2018. To finish as the leading point scorer in the 25 rounds of the regular season was a great effort.

8.26pm: With the awards for on-field feats to start being handed out shortly, the excitement in the room will be building.

8.05pm: Firstly, here is a list of the contenders for the positional awards. Who are you backing to leave the night with a keepsake? 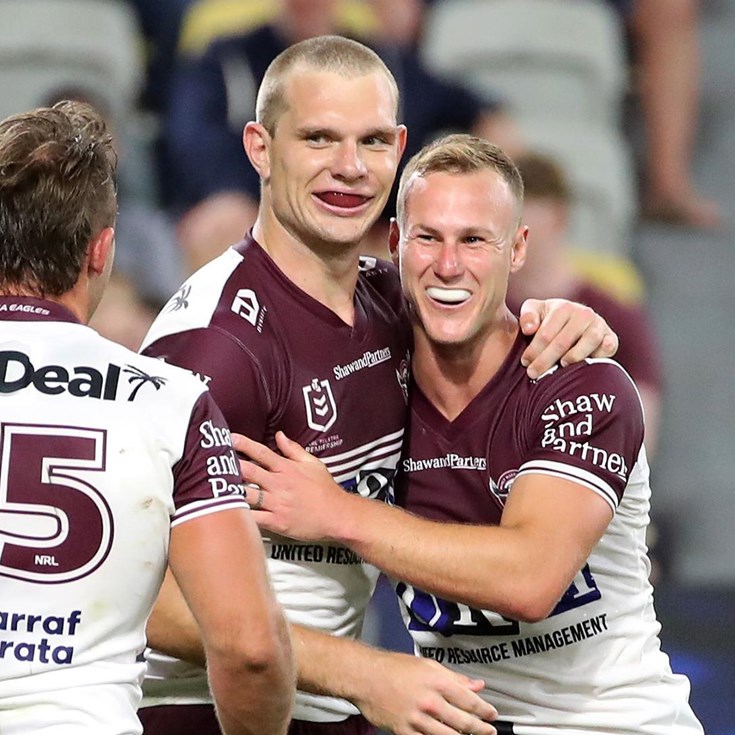