It's an understatement to say it's a massive week for both these teams.

The Warriors started the season with a bang and have been pretty awful since, losing their past two games by a collective 80 points.

If they can't beat the Titans at home, Warriors fans might start calling for Stephen Kearney's head.

But at least the Warriors have won.

The Titans are the only team without a victory, though they gave the Rabbitohs a bit of a shake in the second half last week and need to carry that form into Friday's clash.

Warriors: In a late change an hour before kick-off, Lachlan Burr will start the match at lock, with Adam Blair back to the bench. Gerard Beale and Leviaha Pulu were the two players left out an hour before kick-off. Chanel Harris-Tavita will make his NRL debut in the halves alongside Blake Green. Youngster Adam Keighran was dropped to the reserves list on Tuesday and then omitted altogether on Thursday along with Blake Ayshford. The Warriors have won 14 of their past 16 games against the Titans.

Titans: The Titans will start 1-17, with Max King and Phillip Sami the last two players omitted. Ash Taylor and Tyrone Roberts came through the side's final training session on Thursday and will make their return from injury. Ryley Jacks and Jai Whitbread were omitted 24 hours before kick-off. Titans centre Tyrone Peachey has scored eight tries in eight games against the Warriors.

Both teams need their respective centre pairings to raise the bar. Kearney is banking on more from Peta Hiku and Solomone Kata, while Garth Brennan wants to see Tyrone Peachey and Brian Kelly click or changes are on the cards.

Maybe they were emotionally drained and that's understandable with everything they've been dealing with since the Christchurch shooting, but the Warriors need to hit the tackle pads this week and get some hunger and pride in their defence.

Brennan needs to build on the positives that came out of the loss to Souths. Prompt line speed is essential defensively, while the Titans have to get the ball wide more often to Anthony Don, who became the club's most prolific try-scorer last week.

Both teams have been pretty poor to start the season. I want to see the Warriors forward pack be a lot tougher when the game is on the line. The Titans are scoring tries off kicks but the attack has been very poor. Garth Brennan needs to get some second phase football going and get Mitch Rein into the game. Warriors by 2

Skipper Roger Tuivasa-Sheck is second in the NRL in run metres (606) behind Blake Ferguson (640) and is also second in kick return metres (212) behind Michael Gordon (245). Jazz Tevaga has a league-high seven handling errors.

As mentioned Gordon leads the NRL in kick return metres (245) and is also tops in support play (65). Jai Arrow is fourth in post contact metres (178).

Garth Brennan must've walked under a ladder or two with all the bad luck the Titans have had on the injury front. The off-season arrival of Tyrone Peachey and Shannon Boyd had some pundits thinking top eight for the Titans, but those predictions look bleak with first-choice halves Ash Taylor (quad) and Tyrone Roberts (achilles) not expected to return any time soon. Hooker Nathan Peats (pec) joined the pair on the sideline last week, but Brennan knows club directors just want to see wins and is under pressure to deliver. 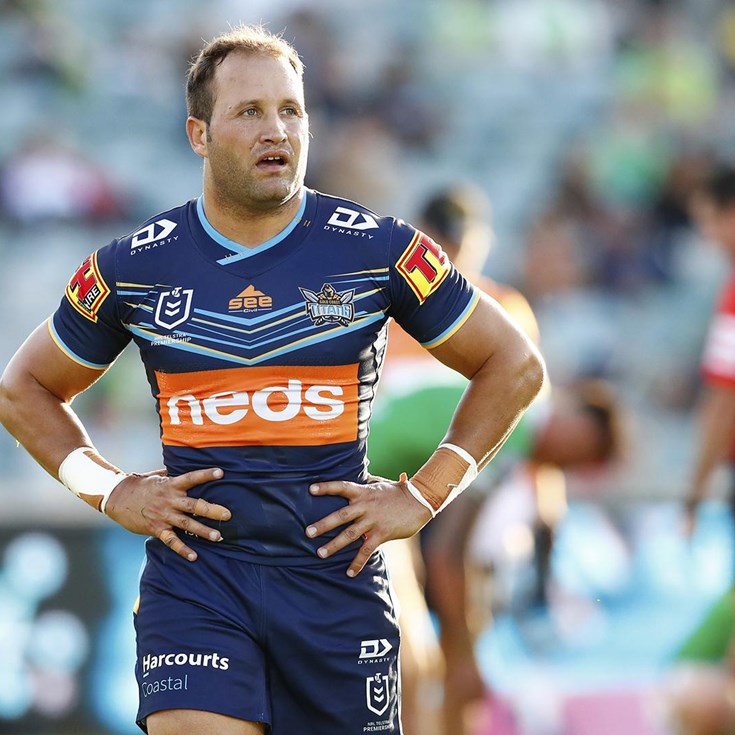