Four rounds into 2019, the Eels are halfway towards the total number of wins they achieved last year and already have two more away victories than the zero they managed in that wooden spoon season.

Yes, it's early days. Yes, the teams they've beaten – Penrith, Canterbury and Cronulla – were in two cases well off their game and in the Sharks' case, significantly understrength.

But in those three wins and a valiant loss to premiers Sydney Roosters in which they led after 60 minutes, there is absolutely no question that this is a different Parramatta to 2018.

At this time last year, their season had almost completely unravelled and Clint Gutherson was yet to even play a game as he eased back from a knee reconstruction.

So what has actually changed?

NRL.com Stats crunched the numbers and the results were interesting. After four rounds the attacking impact of the starting middle forwards, edge forwards, the bench, and even the halves is almost indistinguishable from the numbers put up at the same point last year.

However the difference from the back five and in particular the back three is night and day, with Gutherson's presence from round one and the recruitments of big-bodied flankers Blake Ferguson and Maika Sivo reaping huge dividends.

Back three light up

The biggest difference is the impact from the backfield and the numbers are startling. In the first four rounds last season, a constantly shifting back-three combination of Josh Hoffman, Will Smith, Bevan French, Kirisome Auva'a and George Jennings gained just 1092 metres in four games at an average of 91 metres per player per game (Jennings gets a pass mark – he started just once in that time and his club debut netted him 162 metres but at the lower end French and Hoffman averaged just 71 metres each in a combined seven games).

This year that total has more than doubled to a whopping 2300 metres in four games. The "worst" of the three this year, Maika Sivo, is averaging 149 metres per game and his 594 metres is more than double what any of the Eels back three made through four games in 2018 (Auva'a's 290).

It's not just the yardage either. Gutherson's ball-playing has been crucial, as has Ferguson's second-phase play. The difference in the Parramatta back three from last year to this year through four rounds includes an increase in tackle busts from 33 to 39, in offloads from one to six, in line breaks from four to six, in line break assists from zero to six and in try assists from zero to seven.

The numbers are even more stark if you take out the first 40 minutes of 2018 when Josh Hoffman raced two tries past a slow-starting Penrith.

There has been an uptick in the centre performance as well with a rejuvenated Michael Jennings and Brad Takairangi boosting the centre numbers from two tries in 2018 after four rounds to five this year, total metres from 648 to 732 and offloads from three to 13.

The presence of hulking edge forwards Marata Niukore and Shaun Lane has shored up the Eels' previously flimsy edge defence. Last year, a combination of Tepai Moeroa (who is relishing a shift to the middle this year), Manu Ma'u, Kenny Edwards and Brad Takairangi managed an effective tackle rate of 86.1% through four rounds when playing as starting second-rowers.

The unchanged pairing of Niukore and Lane has this year managed 92.8%. Lane has masterfully shepherded Dylan Brown (and then Jaemon Salmon) on the left edge while Niukore has been an understated star of the right edge in attack and defence.

The Great Penalty Blitz of 2018 eventually claimed a few victims but its first was arguably Parramatta's finals hopes, with the stubborn Blue & Gold showing absolutely no interest in adapting to the new, stricter interpretations at the start of last season.

The Eels were completely unprepared for the sterner policing of the ruck in particular and were pinged a whopping 39 times in four games to start the year. This year that figure is just 15.

Of those 39 penalties, 23 were given away in the ruck for crowding, slow peels, hand-on-ball infringements, stripping, lying in the ruck, markers not square, crushers and leg pulls.

This year the Eels have given away just six ruck penalties in four games.

Five more have been given for late or high tackles, three for offside and one for escorting a kick chaser as the Eels find themselves the least-penalised team through four rounds having been fifth-worst at the same time last year.

Total penalties across the competition are down by a third compared to this time last year but for the Eels alone the drop is almost two thirds.

As much as every coach at a losing press conference leans on the error-rate as a reason for their under-performance, statistics repeatedly underpin the fact that handling errors are given far too much credit for results.

The Eels have far more errors after four rounds than at the same time last year (up from 33 to 47). Which is not necessarily a bad thing - just look at the Bulldogs, who had the fewest errors after two rounds this year despite two huge losses.

Part of this increase in errors is due to an increase in ball-in-play time across the NRL stemming from lower penalty rates and consequently fewer penalty goals being kicked.

Despite an almost 50% jump in errors the Eels are enjoying far more possession and consequently being asked to tackle less.

After four rounds last year they averaged 44% possession with 1715 tackles attempted at 85.5% effective and 18 tries conceded.

This year they average 52% possession with 1528 tackles attempted at an 88.7% effective rate. 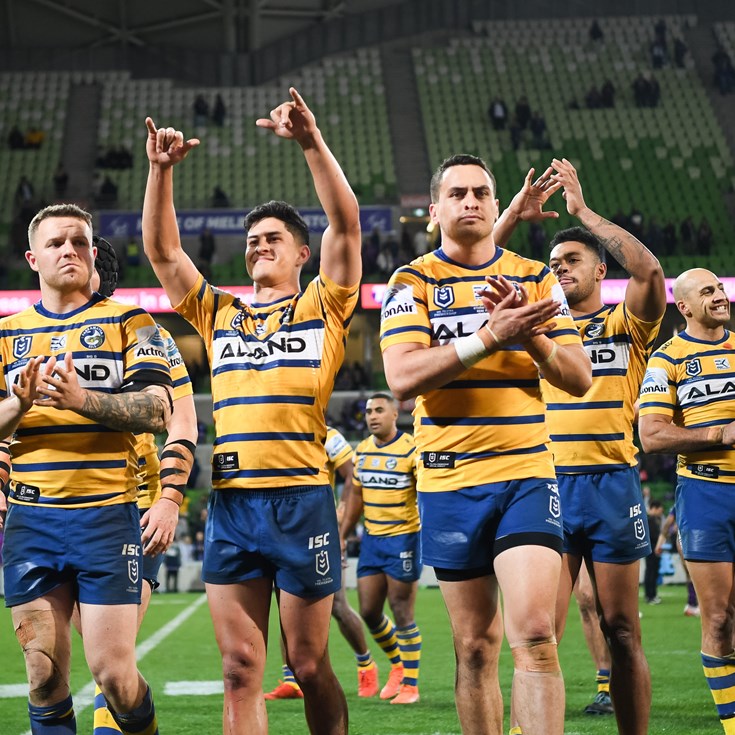