Canberra winger Jordan Rapana has long been known as one of the best attacking players in the Telstra Premiership.

But spurned by missing out on playing in the finals the last two seasons, the flamboyant winger has vowed to attack with the precision of a surgeon rather than go for the doctor on every single play.

During their charge towards the preliminary final in 2016, Rapana and his attacking accomplice Joey Leilua were responsible for some of the NRL's most breathtaking plays.

Sprinkled among the brilliance were errors Rapana wishes he could take back with the Kiwi international admitting his game has matured.

"A big focus for us compared to previous years is when to chance our hand and when not to," Rapana said.

"To attack at the right time of the game and speaking for BJ and myself on the right side of the field, I think we've got a better balance.

"This year I'm asking, 'was that pass really on, or should I really kick it' and there were a couple of times early when I probably could have taken the winger on the outside or flicked a pass, but we ended up holding onto it, getting to our kick and getting the repeat set.

"It might not look fancy and it might not be the big play but in the long run it’s working them over and tiring them out and you're only going to reap those rewards at the end of the game."

The patient approach from the Raiders can be seen in their possession stats through the first five weeks of the season.

Canberra leads the Telstra Premiership in terms of possession per game, with the Green Machine earning 55 per cent of the ball.

Rapana said the side is more composed than in previous seasons when things were not going their way.

He pointed to a 20-minute period against Parramatta last weekend when the Raiders hammered the Eels' line for no reward on the scoreboard.

"Coming in at 8-0 at half-time with the amount of possession we had we could have sat there and said we should have been up by more," Rapana said.

"They are obviously a good team and the compete hard for most of the game.

"We knew if we ground them down in the first half and keep their outside backs out of the game that in the last 10 or 20 minutes we would get the points.

"That's exactly what our coaches said was going to happen and we stuck to our plan and it paid off." 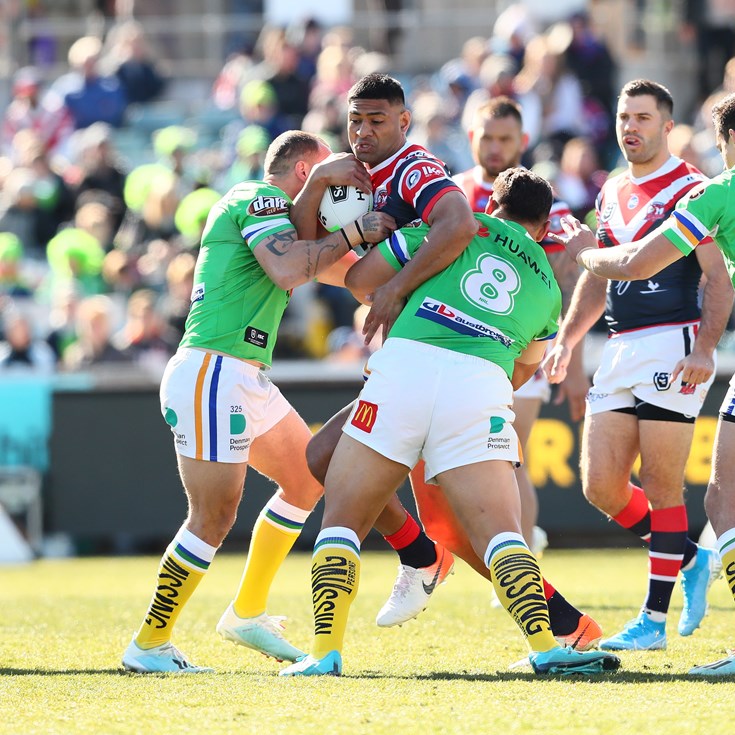 'Ridiculous': Stuart tells rivals to get better not bitter over stripping rules

Leilua may be out three months with neck injury