Panthers captain James Tamou often stares at the ceiling until the early hours of the morning deconstructing a defeat.

After being unexpectedly elevated to the role of lone skipper following five rounds, the responsibility has made losing harder to swallow for the 241-game prop.

He would have hardly slept a wink as Penrith dropped their first five matches in his tenure, with the side winning just twice in the opening 10 rounds.

"There's been a fair few sleepless nights in my house after a loss. One of the biggest things is you take it on your shoulders as the leader. But you take it both ways with the win as well. It's more magnified," Tamou told NRL.com.

"The learning aspect is lending my voice out on the field to referees. Off the field not much has changed. Taking the coach's word and driving it more into the players [is the main thing]."

With seventh-placed Penrith's mid-year revival propelling them into finals contention, the determined Tamou believes too "much was invested" into the pre-season for the team to fall short of the play-offs.

"With Ivan [Cleary] coming through and the juniors coming in... it's one of those things where you're not ready to give up footy after round 25," he said.

"That's the feeling with the boys at the moment. We want to kick on. It was a tough pre-season. That's what I mean by investing so much into it, we just don't want to be let down by the end of the season. We want to carry it forward."

Guiding Penrith to a top-eight finish would be a huge achievement for Tamou, given he feared he was going to be pushed out of the club before this season. In the end, fellow forward Trent Merrin moved to the Super League.

"I even told the wife, 'Just be ready - we might have to move'. And she understands the whole aspect of it, the whole game of it. We were preparing I guess," Tamou said.

"I knew I needed a big one this year... I knew I had to have a good full pre-season, keep the body right and be ready for round one. Considering where we've gone, I think the best I can do is be the best I can in my position."

Statistically, Tamou is enjoying his finest season since arriving at Penrith from North Queensland in 2017, averaging 126 run metres and 33 tackles per match.

Panthers believe they are similar to Broncos

Taming the tearaway 19-year-old won't be easy but Tamou is up for the task.

"When you're settling in at home getting ready to watch some Friday night footy, you look forward to watching the Broncos and Payne Haas," Tamou said.

"He's one of those new age front-rowers that play big minutes and pull out big numbers. It's a scary thing when he gets a roll-on.

"I've watched him just skittle other players around and he's lethal with those quick play-the-balls. Out wide, too, he's tough to handle.

They've got Matt Lodge there as well who's tough to handle. [Haas] is just one in their team we've got be careful of." 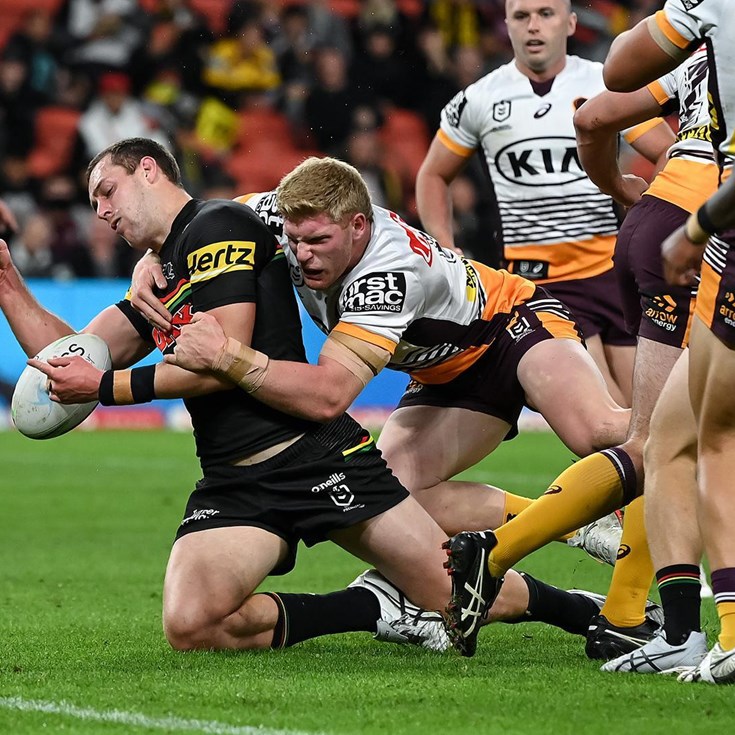 Why Panthers' run home will have them 'battle hardened' for finals