Joel Thompson has confirmed he suffered a broken arm during the Sea Eagles' 18-14 win over Canberra on Sunday at GIO Stadium.

Moses Suli suffered a syndesmosis injury and left the ground in a moon boot and on crutches but in better news for Sea Eagles fans, the centre was on Monday cleared of serious damage and club officials are hopeful he will only miss this Saturday's crucial clash with Melbourne at Lottoland.

Thompson will undergo surgery on Tuesday on his arm and the Sea Eagles are hopeful he could be back on the field in 4-6 weeks, meaning he may appear again this season if the team makes a run in the finals.

While his arm is broken, Thompson's sense of humour is intact with the veteran forward posting on social media that he might have to use Canberra Immortal Mal Menninga's old famous armguard in future.

Thanks again for the messages 😊

It won’t stop us at Manly, with quality players coming in 🦅❤️

While the loss of Suli and Thompson is a blow for Manly ahead of their clash against Melbourne at Lottoland, the Sea Eagles are not without replacements if they are ruled out.

Manly coach Des Hasler confirmed after Sunday's game that second-rower Curtis Sironen (hamstring) and centre Brad Parker (knee) are "likely" to come back into the starting side next week for the much-anticipated top four clash.

"Like any side playing Melbourne, it's always a big game on your agenda and that's the sort of club they are and that's a credit to them," he said.

"It'll be no different next week, the boys love playing Brookie and there's always intrigue around those games."

The win over Canberra wasn’t the most clinical game of Manly's season but the fact some of the side's younger players experienced finals-like intensity will be invaluable going forward.

"It's always good to get a couple of tough games for the run in (to the finals), so these sorts of games will come in handy because this side is relatively young when it comes to semi-final experience," Hasler said.

"[Finding a way to win] was something we spoke about in pre-season and as the season has gone on they're really growing into that role to be able to do that.

"If you want to go anywhere in this competition you've got to have that ability to hang in there, so [Sunday] was another sign of that.

"Especially given we made it really difficult for ourselves in the first half with penalties and possession, but they're things we can work on and things we can fix." 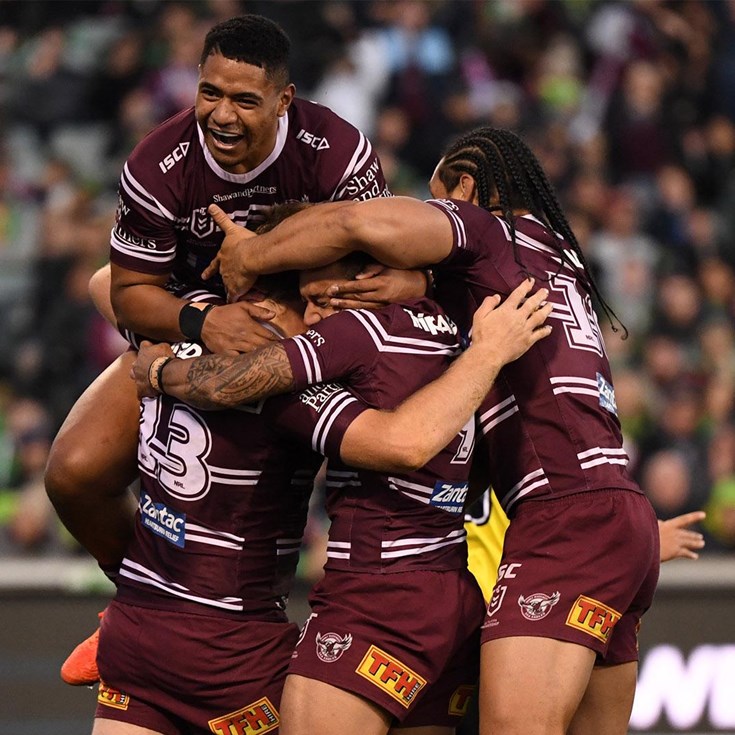