Fiji players cited a perceived lack of respect as motivation for their thumping 44-18 win over Samoa in Saturday's Oceania Cup Test at Eden Park.

The mood in the Fiji camp changed on Friday after captain Kevin Naiqama and coach Brandon Costin told them they had been embarrassed to attend Friday’s media call in Auckland.

"They reckoned they shouldn't have went," Melbourne winger Suliasi Vunivalu said. "I think 15 questions plus went to the other team and just one to us.

"They just felt a bit embarrassed going there and we backed it up with our performance today. We were ready, everyone wanted to come out and win."

Fiji have now secured a place in next year's Oceania Cup Pool A unless they lose by more than 22 points against Papua New Guinea next weekend. They hold no fear about playing New Zealand and Tonga in 2020.

The Bati beat the Kiwis in the quarter-final of the 2017 World Cup at Wellington but lost 54-6 to Australia in the semi-final.

"We want to close that gap and our goal as a team is to win it," Naiqama said.

‘Crying’ Kikau: How tears united Fiji ahead of Samoa smash-up

Costin added: "The ultimate goal is always what happens at the 2021 World Cup. There is a massive gap to bridge and the more we can get our players together the better it is going to be."

Penrith second-rower Viliame Kikau revealed that each time the players come into camp they take turns at speaking about where they have come from and what it means to pull on the Bati jersey.

"Everyone just speaks from the heart and it's a time where everyone gets so vulnerable and heaps of the boys cry," Kikau said.

"I think that is one thing that brings us together and we have our devotion, we sing hymns, and we not only perform for on-field but off-field as well.

"I always cry, singing the national anthem I can't even sing it. I get so emotional."

Martin Taupau (104m) was the only Samoa forward to carry the ball for more than 100 metres.

"We knew we were in for a real tough physical game against Samoa, you could see that on their team list, but the game plan the coach had for us I feel like we executed that as a team really, really well," Naiqama said.

Fiji turn on the magic

Kikau said the Bati used their underdog status as motivation.

"We didn't really care what the media said about our team, we got here and trained the whole week, we didn't have a day off," Kikau said.

"I'm just wrapped with how the boys came out today. We knew we were underdogs, obviously, Samoa has got big names and NRL players in their team, but we have got a fairly young bunch and we just came out and done our jobs."

Costin said Parramatta winger Maika Sivo would play next weekend in Christchurch after completing a suspension but it was going to be a tough decision to drop his replacement Isaac Lumelume. 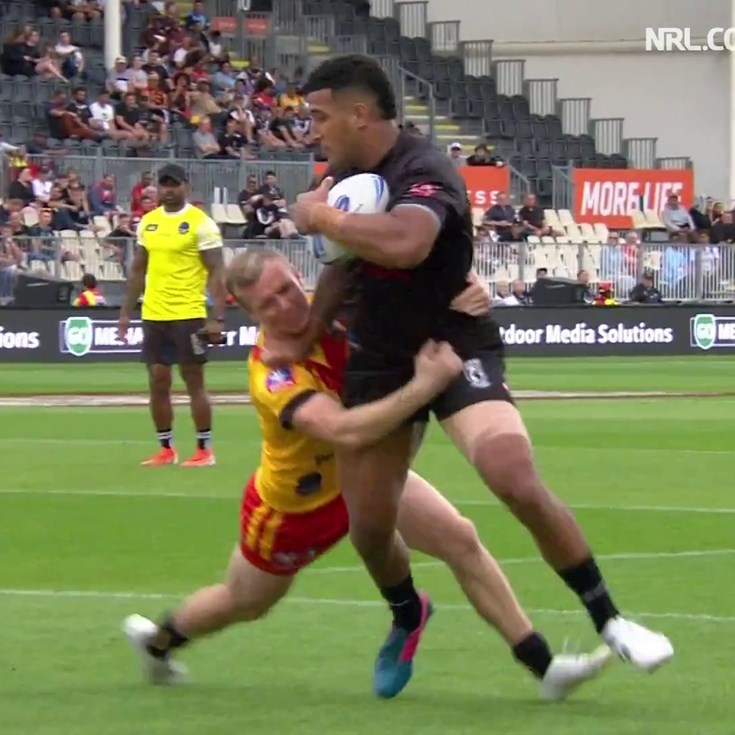 Kikau dives over for his double

Kikau gets a try of his own