Nat Dwyer is a household name in women's rugby league but for many new fans and rising players, chances to see her pull on the boots were limited.

Dwyer, listed as Jillaroo No.1 on the official player number list, enjoyed a stellar 19-year career at the international level while representing both NSW and Queensland.

Dwyer spoke to NRL.com about her career and passing on her knowledge to the next generation of stars.

You were originally from Albion Park, (near Wollongong) NSW - what was your childhood like playing rugby league?

I have an older sister and three younger brothers and we had a spare block next to us owned by my grandparents. Some of my brothers' mates would come over on the weekend and we'd play pretty rough.

I remember one boy going home crying because I tackled him too hard. I had a wonderful childhood and credit my skill and love of league from there.

You ended up moving to Queensland and swapped a NSW kit for Maroon – what happened there?

I moved because of work. Queensland were just starting their incredible winning streak. It was interstate challenge and nothing was really questioned. There were no issues swapping jerseys as a lot of my mates were now Queenslanders.

I just loved playing the game. I decided to play for NSW for a couple more years to try an even up the teams, along with a couple of other Queensland girls. It wasn't fair living in Queensland and taking a NSW jersey from someone down there.

Can you recall the next game you clashed against your old NSW teammates?

Funnily enough most of the girls I played with had finished by the time I played for Queensland. But once you cross that line and take the field they became the enemy.

You changed positions at various times throughout your career – did you pride yourself on your versatility or was it a case of needing to change?

You needed to be versatile. I was 18 when I was a centre. I don't think I would be able to keep up with the younger generation coming through at age 40.

I was playing in the halves for NSW with Tarsha Gale and Karyn Murphy was the opposite half for Queensland.

Tarsha and Karyn were the Australian halves for a while so a change was needed to stay at the top. I moved to hooker and stayed there towards the end of my career. I also played lock and a bit of fullback in between.

We've heard stories of how difficult times were and still are to play rugby league for women, what was your journey like to the top?

Financially it was tough. There were no sponsors or a great deal of money in the sport early on. We would have to raise all our own money or it would come out of our own pockets. One year the cost to pull on an Australian jersey was $5000.

I'm very lucky to have a supportive network in family, friends and I was lucky to have great employers over the years with my annual leave always take up with the game. There were a lot of pub raffles and my family would help with golf days.

Our uniforms [would] rarely fit. Some years we never had the best team as girls couldn't afford the trip or take leave. The turning point came when we won our first World Cup in 2013.

You captained the inaugural Australian team against New Zealand in 1995 and are listed as player number one for the Jillaroos – that must be nice to reflect on?

Reflecting on the '95 team and being a pioneer is very special. To captain the team, to have the honour of being listed as No.1, I'm very grateful.

My kids are a little young to understand, but I'd love to tell them about my football achievements one day - for them to know my name is in the history books.

New Zealand dominated the Australian side throughout most of your career, how satisfying was winning the 2013 World Cup?

I have a lot of respect for the Kiwi Ferns and up until 2013 they were the team to beat. Luisa Avaiki, Lorina Papali'i and Trish Hina were among some of the best players in the game ... strong, fast and relentless.

Their team in 2013 was very strong with the likes of Laura Mariu, Sarina Fiso, Rona Peters and Honey Hireme.

We had a lead-up camp and I remember sitting down with the coach making sure we had the best preparation as I knew this was my last time representing Australia before retiring.

I remember being replaced in the second half of the final. I sat nervously as my teammates did their job. When the siren went I ran out onto the field, the first person I saw was Jo Barrett. She was crying.

To describe it, it was just very satisfying. We had a wonderful team with a mix of youth and experience.

You're still involved in the game, can you tell us what you're up to now in retirement?

I'm kept very busy these days with two beautiful boys, a five-month-old and a four-year-old but I still have a strong passion for footy and a strong footy mindset.

I had a year away from the game to refresh. It's hard playing the game for over 20 years, making so many friends, seeing them week-in-week-out and then it all finish.

I thought I could give back to the sport that had given me so much. I coached both North Ipswich and Ipswich Brothers in the Brisbane Women's Rugby League competition.

I had an opportunity to be assistant coach for the Queensland team two years ago alongside Karyn Murphy and Jason Hetherington. Coaching is very different from playing, I'm still learning the trade and enjoying every moment.

How would the modern day athlete match up opposite players from your time?

There is so much more available to the girls with advances in technology, financial support and support staff. The girls are trained to be athletes and monitored all year round which goes to show how much the game has grown.

Women's rugby league has grown in leaps and bounds in the past six years and I couldn't be more proud to have been part of the Jillaroos.

What do you want to see happen in the women's game over the next two years?

I think Queensland have some catching up to do to NSW when it comes to the growth and support of women's rugby league. There are plans in place to address this and to get Queensland to where they need to be.

I would love to see the NRLW teams play each other twice and an additional two teams entered into the competition.

NSW have the Under 18's Tarsha Gale Cup which I believe Queensland would benefit from and would only strengthen their pathways if they followed a similar move. 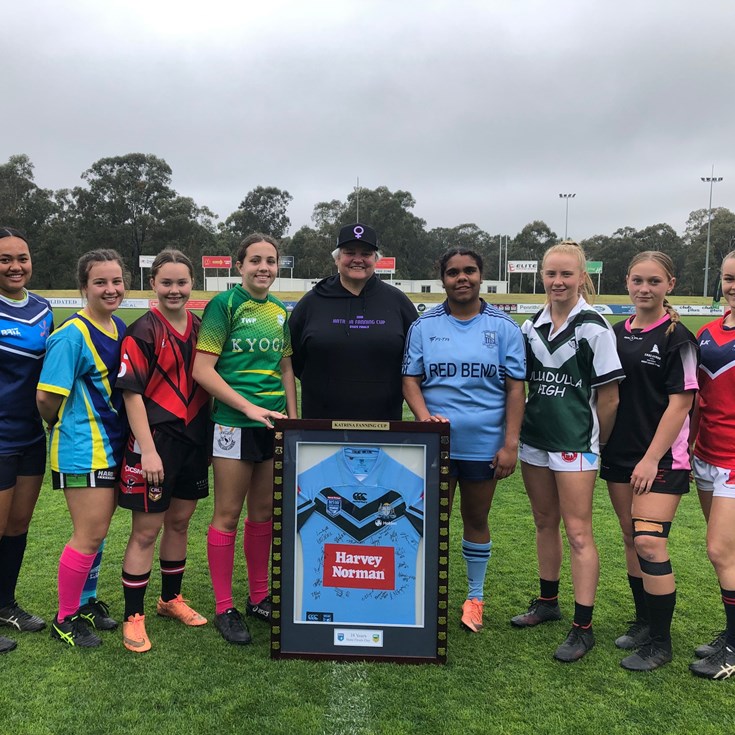 Women's State of Origin returns to the Sunshine Coast

Dragons too strong for Roosters in Tarsha Gale CupGF