Controversial ex-Wallaby Israel Folau will return to rugby league with French club Catalans on a one-year deal that has been reluctantly approved by Super League's governing body.

Folau will link with the Dragons with an eye to lining up in his first rugby league game since 2010 as early as next week, ending his nine-month exile since he last played professionally as a rugby union player over homosexual slurs on social media.

The 30-year-old reached a confidential settlement with Rugby Australia in December after suing the governing body for religious discrimination, and will now return to the game where he first made his name and represented Queensland and Australia as a teenager.

Folau said via a club statement that he acknowledged both the Super League and the RFL had reservations about his controversial views but said his focus was now on returning to professional sport.

"I’m a proud Christian, my beliefs are personal, my intention is not to hurt anyone and I will not be making further public comment about them," Folau said.

Super League CEO Robert Elstone described Catalans decision to sign Folau as "disappointing", but said there was no legal grounds to deny the contract.

My beliefs are personal, my intention is not to hurt anyone and I will not be making further public comment about them.

"Super League deplores the homophobic comments Israel Folau has made in the past, which squarely contradict our sport's core values," Elstone said.

"I have sought the opinion of informed voices connected to our game, and the majority share my disappointment that one of our clubs has chosen to sign him.

"There is a strong feeling that the decision to sign him lets down many people connected to our sport.

"I made Catalans Dragons aware of those views.

"However, Super League does not have the authority to veto the registration of players and is satisfied by the due diligence carried out by The Rugby Football League.

"Israel Folau is a free agent, who has the right to work, and he has not been charged or found guilty of any criminal offence.

"Catalans Dragons has assured Super League that strict guidelines are in place to prevent the player from repeating his comments.

"They have also assured us that his contract will be terminated immediately should he do so."

The RFL echoed Elstone's stance in a statement of their own, finding that "however distasteful [Folau's] previous comments, we don't believe that, under our current regulatory framework, these can prevent his participation in the sport".

Both current ARLC chairman Peter V'landys and his predecessor Peter Beattie moved to block any NRL bid from Folau with zero tolerance for his anti-gay messaging.

Catalans chairman Bernard Guasch said his club do not share the Folau's religious beliefs, but wanted to give the dual-code superstar a "new opportunity to shine on the pitch".

"We do not share or condone those views and we are totally committed to our club and our sport being open and welcoming to everyone," Guasch said.

"We do not believe that those views should be publicly expressed, especially by a high-profile sports person. We have a signed agreement with the RFL.

"Any transgression will trigger an immediate termination of Israel's contract and a substantial fine for the club."

His signing is the latest high-profile move back to rugby league, following on from Sonny Bill Williams' shift to Canadian outfit Toronto Wolfpack while England internationals Gareth Widdop and George Burgess will also line up for Warrington and Wigan respectively after lengthy NRL stints.

Folau scored 73 tries in 91 NRL games for Melbourne and Brisbane during his first stint in the 13-man game, before making an ill-fated code-hop to AFL.

His subsequent move to rugby union saw him dominate the code with three Wallabies player of the year awards and the most tries in Super Rugby history while representing NSW.

The NRL is making no public comment on Catalans decision to sign Folau but a spokesman on Wednesday pointed to ARL Commission chairman Peter V’landys' statements on inclusiveness made in October last year after he took over from Peter Beattie as head of the ARLC.

V'landys told his personal story of how rugby league changed his life as an immigrant child trying to fit into Australian society.

"The game is inclusive. Israel's comments are not inclusive," V'landys said.

"I have no tolerance for people that put other people's lives (at risk) or (commit) violence. It's a big statement to make. With due respect to Israel, what he says, young kids listen to. He is a role model. They act on it. And when you're a kid at school and you get bashed up because you're different, I don't think that's a good thing.

"I think we need to be more inclusive and I think the greatest asset our game has is it is very inclusive." 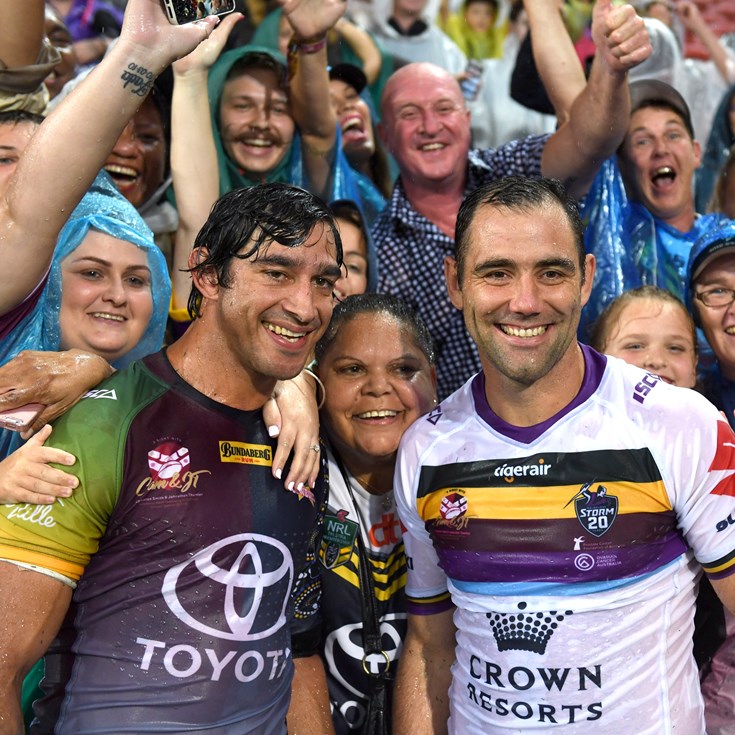