The Dragons could well target a marquee backline signing such as Storm speedster Josh Addo-Carr rather than chasing a like-for-like replacement for Newcastle-bound star Tyson Frizell.

Frizell's acceptance of a lucrative Knights offer, understood to be worth around $2 million over three years, has left St George Illawarra in a position to enter the market with a similar figure after they matched Newcastle's bid late in negotiations.

The Test and Origin back-rower's move is still a hammer blow to the Dragons, adding more fuel to the growing fire around coach Paul McGregor.

He has been the club's best and most consistent player for several years, a standing reflected in what recruitment manager Ian Millward described as "marquee money", offered to keep Frizell.

The deal presented to Frizell is believed to be the most lucrative tabled for a Dragons forward in the joint-venture's history.

All roster moves and contract talks are up in the air amid the unprecedented COVID-19 pandemic, and Frizell's Newcastle contract won't be registered by the NRL until the game has clarity over forecast losses and the state of the salary cap.

But with a nod to a Red V roster light on strike power out wide but heavy on big names up front, Millward acknowledges Frizell's planned salary could well be spent elsewhere.

NRL.com understands pursuing Addo-Carr has previously been discussed internally by the Dragons.

"The Foxx" is slated to leave Melbourne at season's end for personal reasons although the Storm have previously said they would only grant him a release if they can sign a player of similar standard to the NSW and Australian winger.

Manly centre Moses Suli has also been in their sights with Euan Aitken and Tim Lafai off contract at the end of 2020.

"This offers us a great opportunity to look at the market and look where the market is going to move to for coming seasons plus we have some very good established and emerging players within our ranks," Millward said on Friday after Frizell's departure was confirmed.

"We have a lot of extremely talented players, experienced and emerging, in our current ranks. And it may be that they can fulfil those current positions.

"But also we may look at other positions that we feel we can provide a substantial amount of money in those positions now that Tyson's knocked back what we call a very big offer."

The Dragons pack will also take on a very different look in 2021 with Frizell exiting, veteran James Graham expected to retire and lock Jack de Belin's future unclear as he has been stood down while he faces sexual assault allegations.

De Belin also comes off contract at the end of 2020, but representative forwards Tariq Sims and Paul Vaughan, captain Cameron McInnes and Sims's brother Tariq are tied up for at least the next 18 months.

Cut-price off-season recruit Tyrell Fuimaono has also impressed since arriving from Penrith while rising 23-year-old Blake Lawrie is highly regarded at the club.

In the back line though there is less certainty with only Zac Lomax (contracted until 2025), Ben Hunt and teenage winger Jason Saab (both 2022) signed long term. 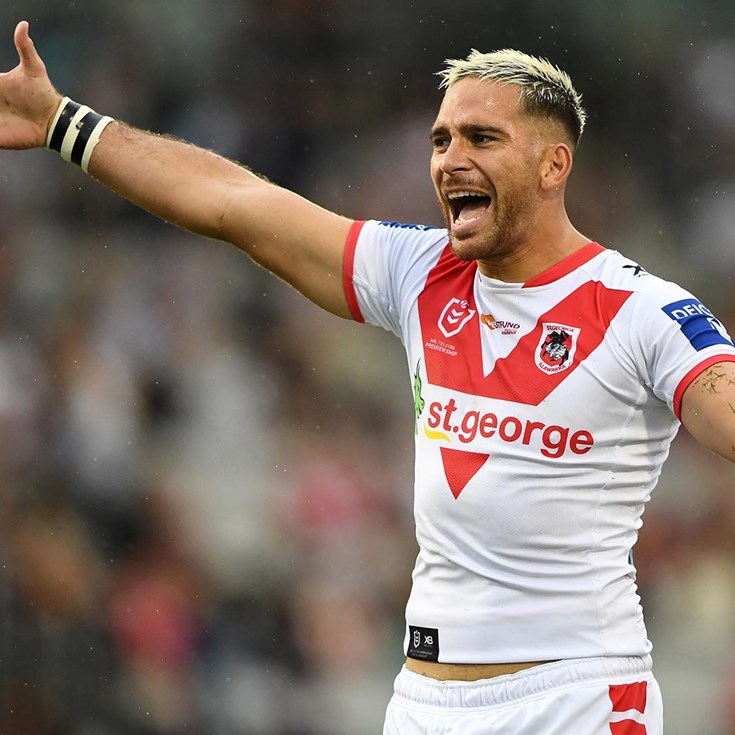 'He was fuming': Inside the battle for positions at the Dragons