North Queensland wrecking ball Jason Taumalolo spent five seasons finding his feet in the NRL and the next five using them to power through opponents.

But at 26, he’s now in his prime and the numbers show he's getting even better in key areas that could elevate him into one of the greatest forwards of all time.

He was recently voted number one in NRL.com's 'Simply The Best' fan poll of best locks of the past 30 years and the statistics show the Tongan leader is truly a once-in-a-generation talent.

The 26-year-old earned a debut way back in 2010 as a 17-year-old, playing four games in two seasons before earning a regular spot in 2012 onwards.

After two seasons as a benchie then one as a second-rower, Taumalolo's full-time move to the No.13 jersey in 2015 corresponded with both a Cowboys premiership and an explosion in the Test star's output.

A deep dive into his output compiled by Stats Perform for NRL.com - looking at his frequency of runs, metres per run and runs per tackle bust from 2013 to now, including a pair of mighty performances to start 2020 - suggests Taumalolo could be in the process of improving even further.

Taumalolo played more than 20 games in a season for the first time in 2014 and played at least 23 every year since until a knee injury restricted him to 18 last year.

Good numbers for a youngster in his first year as a starting 13 player but hardly spectacular.

Taumalolo shaved a full minute off his run frequency in 2015, carrying once per 3m50s (56th in NRL) and gaining 11.0 metres per run (third among forwards) on the way to a premiership.

In 2016 he shouldered even more, taking another 30 seconds off his run frequency to 3m21, leaping to 14th best in the competition. Metres per run dropped a touch to 10.3, still good enough for fifth best among NRL forwards.

In 2017, James Tamou departed, Ben Hannant retired and Matt Scott missed the year through injury, heaping pressure on Taumalolo to carry the pack. With red pen put through their title hopes, the Cowboys needed something superhuman from their freakish No.13 to be any chance and he duly delivered.

He trimmed another second off his run-frequency to a career-best 3m20s per carry (13th in NRL), lifted his metres per run back up to 11.0 (third among forwards) and busted far more tackles along the way, averaging a bust every 3.8 runs (15th among forwards) to drive the Cowboys all the way to a grand final meeting with the Storm.

Taumalolo hasn't shirked the work since either, keeping his run frequency around one every three and a half minutes since, maintaining a metres per run over 10 and runs per bust under five. His minutes increased even further to 64 in 2019.

Which brings us to his startling entrance to the 2020 season.

It's admittedly a small sample size but with two games played, Taumalolo has racked up 528 metres, averaging 73 minutes per game at a ridiculous 12.9 metres per carry (second among all players and first among forwards) with a career-high bust every 3.4 runs (ninth among forwards).

In two games, Taumalolo has made 14% of his team's total metres and 19% of their total tackle busts.

Those numbers obviously include Taumalolo's record-breaking 345-metre effort against the Bulldogs in round two but if he can maintain anything like those numbers when the season resumes, 2020 could be Taumalolo's best year yet.

And it would be wrong to suggest he is just a force of nature in attack.

Taumalolo has consistently upped the ante on defence - in the premiership-winning campaign of 2015 he was making 21.1 tackles per game and that figure has risen over the past five years, peaking at 29.2 last season.

He doesn’t miss many either with a tackle efficiency hovering in the 90-92% range.

Winger Kyle Feldt has played his entire career alongside Taumalolo at Townsville since debuting in 2013 and says the beauty of the lock's efforts is the consistency.

"He's just a professional the way he goes about his business. This year's no different to any other year, he's always going to come out all guns blazing.

"He'll probably be a bit more consistent this year and that's going to be good for us." 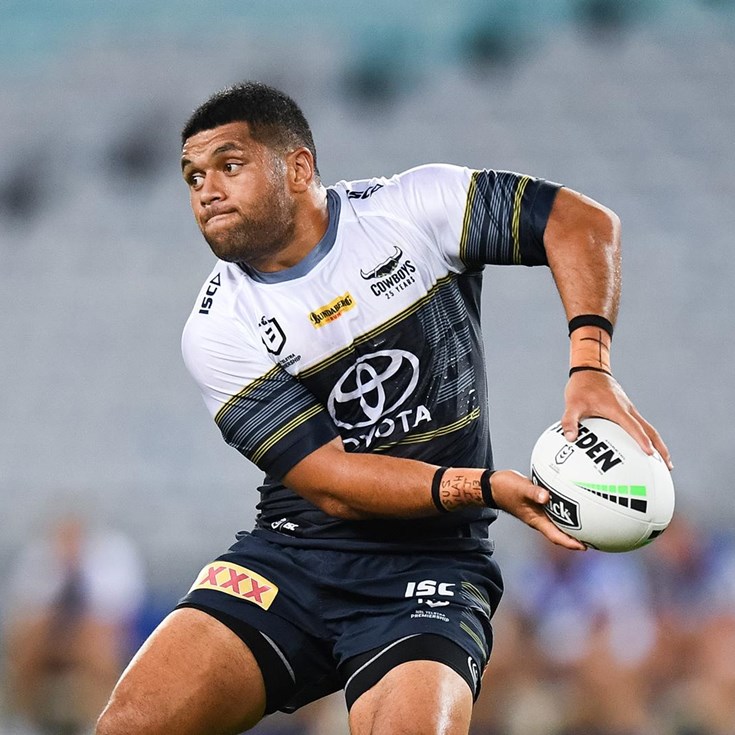 Taumalolo admits he was underdone against Warriors