Jack Wighton said the Raiders don't need to sell John Bateman on the idea of staying in lime green, saying the Englishman already knows how everyone feels about him.

With Bateman's future in Canberra under the microscope, the Bulldogs are the first club to enter the sweepstakes.

Wighton said the English international has not let the speculation get to him as he continues to recover from shoulder surgery.

"Nothing's been done formally done yet but we're just going about training and he's going about his business and he's handling himself very well," Wighton said.

Will Bateman remain a Raider?

"He knows the boys love him and he's said in previous press conferences he loves the club, so he'll make up his own decision based on his family and his little girl and that’s what he plays the game for."

Bateman is unlikely to be passed fit for the Raiders round three trip to Melbourne to face the Storm at AAMI Park on Saturday night.

Canberra beat Melbourne twice on their home ground in 2019, including in week one of the finals.

However, Wighton knows that will count for little on Saturday night.

"We always have confidence in ourselves, but we know it's going to be the toughest one out of all of them," he said.

"Storm, out of any team, don't want to lose three games in-a-row to an opponent, so they'll come out firing and they've got a class team."

Bailey Simonsson has fond memories of the last time he graced the AAMI Park turf, scoring early after being a late inclusion to the run-on side after Joey Leilua suffered an eye injury as he ran onto the field.

Simonsson is set to oppose Storm try-scoring sensation Suliasi Vunivalu on Saturday night. The rugby-bound Fijian has scored seven tries in his last five games against the Raiders.

"They've got some pretty class outside backs down there, so it'll be another good opportunity to test myself," Simonsson said.

"He's [Vunivalu] obviously a big body and a bit of a go-to for them, but I don't try and think too much to be honest about individual match-ups, I just try focus on what I can control."

The Raiders outside backs stocks have been boosted by the return of Jordan Rapana, who appeared lost to the club for 2020 after signing with the Panasonic Wild Knights in Japanese rugby union.

"I love Raps, I said all last year he was such big influence on me and helped me improve on my game," Simonsson said.

"So, having him back is a big boost for me, I'm still so early in my career so having him there to learn off is huge.

"At the end of the day we're all competing for spots, I'm no different than anybody else in the squad, I want to be in that starting squad." 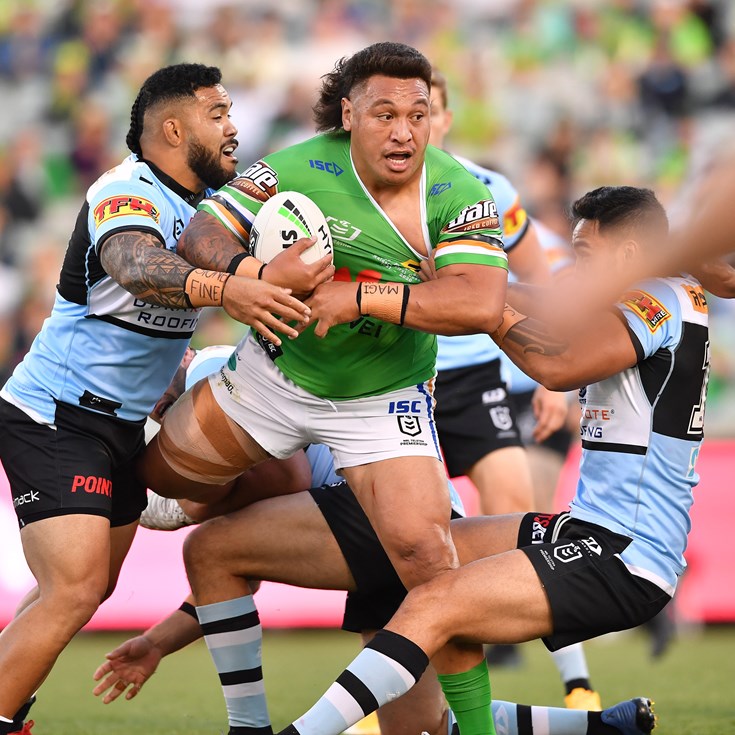