Parramatta captain Clint Gutherson has urged Nathan Brown not to curb his aggressive playing style, despite the Eels lock receiving his second two-match ban of the season.

Brown will miss Saturday's night's match against 2019 grand finalists Canberra and next week's clash with North Queensland after being found guilty of a grade-two careless high tackle at Tuesday night’s NRL judiciary.

His unsuccessful bid to have the charge downgraded for his tackle on Sydney Roosters forward Victor Radley last Saturday night followed a two-match ban for dangerous contact before the season was suspended in March.

The 27-year-old is regarded as a vital member of the Eels side that leads the Telstra Premiership after winning their opening five matches before losing 24-10 to the Roosters in a high-quality encounter.

Gutherson said the Eels don’t want Brown to tone down his aggression.

"He just gets it a little bit wrong sometimes and I didn’t think there was too much in it on the field. I didn’t even really notice it … but that’s not my decision."

The Eels face another tough test against the Raiders on Saturday night and Gutherson backed halfback Mitchell Moses to bounce back from the loss to the Roosters with a big game.

Moses has been one of the form players of the NRL this season but he was a dejected figure at full-time last Saturday night.

Gutherson said that was a sign of how much winning meant to Moses.

"He probably knows it wasn’t his best game, he missed a few tackles on that right edge and we have spoken about that but you want passion," Gutherson said.

"When you win, you enjoy the win and you have a couple of beers, but when you lose you want it to hurt because you don’t want to feel it again the next week.

"I think Mitchell is a great example of that. There is only way to fix it and that is by playing well the next week.

"When Mitchell is playing well we are playing well so it’s important that he moves on from last week, learns from it and plays well against Canberra."

Despite their first loss of the season, Gutherson said the Eels had gained "a heap of confidence" from knowing they had matched it with the back-to-back premiers for the first 60 minutes of the match.

"We showed that we're close but we've still got a bit of work to do," he said. "We were in front with about 17 to go and a couple of big plays cost us and hurt us.

Papalii: Eels have number one pack in comp

"It's not things that are a massive fix - it's an easy fix. It's just a few missed tackles there and we have had review today so we are all stepping forward against Canberra.

"We were all over them for that first bit of the second half but just the way they keep turning up, after that they were on top for the rest of the game and they made us pay.

"That’s what good teams do and they are back-to-back premiers for a reason."

In other judiciary news, Radley has accepted a fine of $700 for a high shot of his own on Gutherson.

Bulldogs winger Christian Crichton was suspended for one match after submitting an early guilty plea for a shoulder charge on Sharks fullback Matt Moylan on Monday night.

Broncos forwards Patrick Carrigan and Tom Flegler have each accepted a one-game suspension after being charged over incidents in Thursday night's loss to Newcastle in Gosford.

Carrigan was facing a two-match ban over a grade-two conduct charge for his late hit on Knights halfback Mitchell Pearce in the 59th minute. He reduced the ban to one game with an early guilty plea.

Flegler has also be banned one match after he entered an early guilty plea over a 43rd-minute incident involving Newcastle forward Sione Mata'utia.

Dragons winger Jordan Pereira is out for two games for a hit on Corey Thompson in the 23rd minute of St George Illawarra’s win at Suncorp Stadium. He could have been banned for three weeks if he did not enter an early guilty plea.

Warriors hooker Wayde Egan is out of Friday's clash with Melbourne after entering an early guilty plea over an incident involving Rabbitohs star Latrell Mitchell.

Egan was charged with a grade-two contrary conduct charge after he appeared to rake his hand across Mitchell's face on Friday.

Panthers five-eighth Jarome Luai has avoided a ban by entering an early guilty plea for a dangerous contact - head/neck charge resulting from a tackle on Melbourne's Felise Kaufusi. 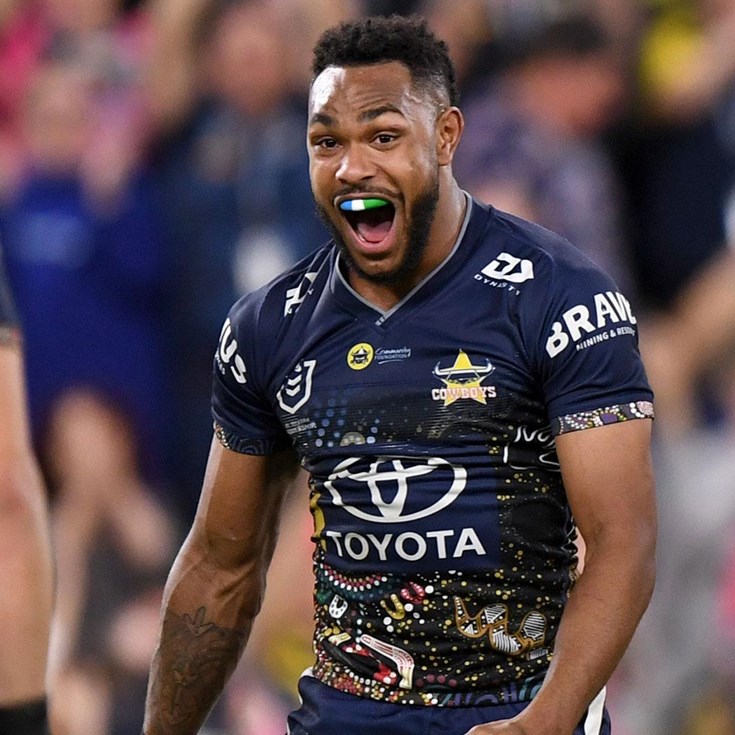 The best of Jahrome Hughes in 2021