The colourful boots Corey Thompson will wear for Indigenous Round will kick vital goals off the field for some of the nation's most vulnerable young people.

Thompson will wear the boots in Gold Coast's clash with the Roosters at the SCG on Saturday as part of the "Boots for Brighter Futures" campaign run by the Cultural Choice Association.

His boots will be auctioned off to raise funds for the charity and raise awareness and get conversations started around Indigenous youth suicide.

The charity is the brainchild of Mark and Jodie Watson, the parents of Newcastle Knights utility Connor Watson who has been the major driver behind the campaign following a family tragedy.

Players from the Knights, Titans and Wests Tigers will wear boots designed and painted by Indigenous youth and in the case of the Warriors, by Maori children in New Zealand.

An Australian Bureau of Statistics "Causes of Death" report in 2018 found Aboriginal and Torres Strait Islanders aged between 15 and 24 were almost four times more likely to commit suicide than non-Indigenous people the same age.

"Over the five years from 2014 to 2018, Aboriginal and Torres Strait Islander children accounted for close to a quarter of all child suicide deaths [85 of 357 deaths]," the report said.

Thompson is a proud Yuggera man and one of three Titans to have boots painted for the cause including Brian Kelly and Mitch Rein.

Thompson's boots were painted by an Indigenous girl from Dubbo who was attending DHUB [Dubbo Opportunity HUB] as part of a holiday program. She did the artwork in conjunction with an Indigenous youth mentor.

"It is a proud opportunity. Indigenous Round on the calendar is one I always circle and it is great to send the boots to the communities where the kids get to paint them and see them on TV when we run out," Thompson told NRL.com

"I will be proud to wear them on Saturday arvo and I thank the people who painted them. It will be great to auction them off after the game to such an awesome charity.

"The [Indigenous youth suicide] rates are so high. You read those numbers and you would think they are made up, but they are real so to bring some awareness to it is important."

The design of Thompson's boots carries special significance and tells his unique story to perfection.

According the artist's design notes, the colourful goanna on the front of the boots represents "staying grounded, as the goanna is a strong representation of strength and resilience in many of our Aboriginal nations in Australia".

The symbolism resonated strongly with Thompson.

"It has not been an easy journey for me. Growing up I didn’t make any rep sides," he said.

"I had a great time at the Bulldogs but when I had to go to England it wasn’t the best option I wanted to take but it was one that was best for my career.

The design traces Thompson’s career where the black and white patterns on the back representing the colours of the Souths-Logan Magpies where he played his junior football.

The colours of the three NRL clubs he has represented – the Bulldogs, Wests Tigers and Titans - are also showcased.

"It makes you realise the time and effort that went into researching my story," Thompson said.

"When I sent the boots off I didn’t tell them about my journey so it is good to see the thought that went into it.

"I am Yuggera, so my nation is in Ipswich where my granddad, relatives and Dad’s side are. I haven’t met all my cousins but I am sure they are all proud and watching and supporting me."

The explanatory notes also state "the red, black and yellow at the back of the boot represents that our culture will always be our Achilles heel in all that we do pushing us forward".

Thompson said that philosophy of "looking forward" was a big personal driver.

"If you have a 'glass half full' attitude and see the positive side of a setback then you realise there is always a reason if you don’t make it.

"I always think about the things I can control and if I work hard it usually puts me in the right direction."

The painting of the boots has been in the works since October when Connor Watson organised sending them out to Indigenous communities.

Jodie and Mark Watson, who used to work in Indigenous education in high schools, started the not-for-profit Cultural Choice Association in 2018.

Jodie said many years ago the couple had a desire to close the gap between Indigenous and non-Indigenous students’ opportunities and educational outcomes, which ignited their initial desire to start up the charity.

"Our eldest son Connor got the opportunity to go to Knox Grammar on an Indigenous scholarship to finish Year 11 and 12, through sport, and the opportunity that brought him was amazing," she told NRL.com.

"It was something we could never have afforded and our second son got the opportunity to do the same thing so we thought at the point it would be good one day to start our own not-for-profit around educational opportunity.

"Boarding school is not for everybody but a good education is."

The duo launched their own Indigenous product range where Mark did the artwork and donated the proceeds to the Australian Indigenous Education Foundation.

Their plans to launch their charity took a different direction when they lost a nephew to suicide and subsequently narrowed the focus of the Cultural Choice Association to assist in the prevention of Aboriginal and Torres Strait Islander youth suicide.

It was also a motivation for Connor Watson to get involved.

When Connor was at the Roosters he got his father to paint his boots for Indigenous Round.

"Connor was at the Knights we'd had the Cultural Choice Association approved so he thought it would be a good opportunity to do a collaborative thing with the whole team for Indigenous Round,” Jodie said.

"Connor spent time at the Kirinari Aboriginal Hostel in Newcastle which hosts students from regional NSW who go through their high school years until Year 12 to further their education.

"We had a relationship with the Glen Centre for alcohol and drug rehabilitation on the Central Coast and doing some work with Baxter Detention Centre and between those three organisations we had more than 20 pairs of boots painted.

"We auctioned them off after the game and 50% of the proceeds went to the Association and the other 50% went to the artist themselves or the school programs in the detention centre or things like that."

A Bundjalung man from Lismore did the artwork for Brian Kelly’s boots while a Biripi/Kamilaroi man designed the boots of Mitch Rein's.

"When we first started doing this with the boots we didn’t realise the connection the kids would have with painting their stories on the boots," Jodie said.

"They have a real connection to it and it has given them an opportunity to talk about the issues they face. It has been amazing."

Gagai: We have a long way to go

Thompson paid tribute to Watson and his family for co-ordinating such a proud moment on Saturday.

"I have met Connor and you know straight away he is such a giving person and a kind, genuine bloke," Thompson said.

"He didn’t have to do what he did but he has done it to gain awareness and make a difference. I am happy to help the charity out any way I can."

Watch the games throughout Indigenous Round to see which players boots you think are the deadliest. You can also head to this link for more information about the charity or to show your support on the GoFundMe page. 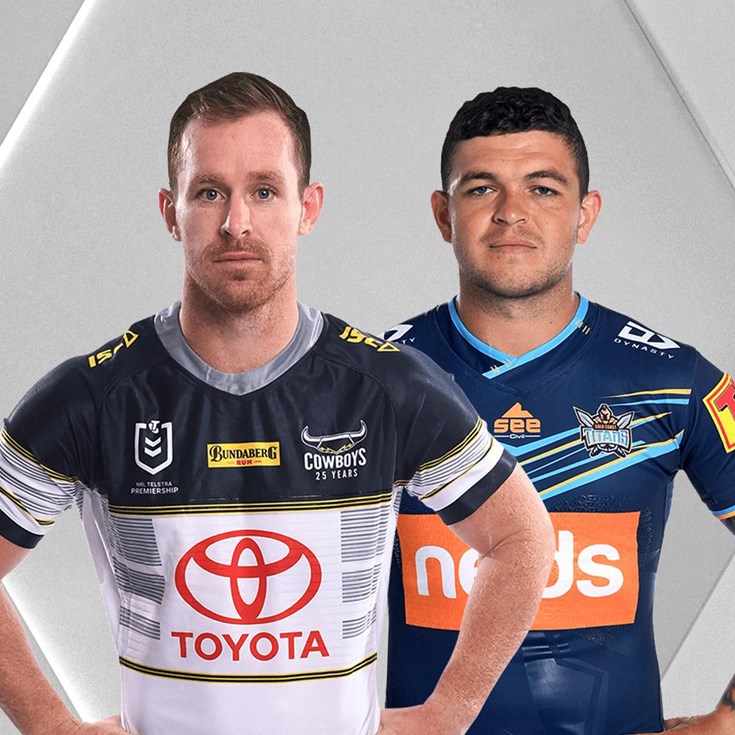