In the second of a series on the breakout stars of the NRL in 2020 leading into the finals, Troy Whittaker details the choices Stephen Crichton faced before deciding to chase a career in rugby league.

He could've chosen basketball or Australian Rules, but Stephen Crichton's choice to pursue rugby league at the urging of his father has been emphatically vindicated.

From playing division-three junior footy five years ago to being a Dally M Rookie of the Year contender this season, the 19-year-old Panthers centre wasn't always earmarked for the top.

The son of a pastor and one of six kids, Crichton was born in Apia, Samoa where his parents, Va'a and Sina, worked in an onion factory.

The family moved to New Zealand when Crichton was two before relocating to Australia in search of further opportunity.

"My parents weren't wealthy as much as they are now when they were in Samoa," Crichton told NRL.com.

From teenager to try-scoring machine: Stephen Crichton's 2020 so far

"They didn't have enough to raise four kids there. And then my little brother and sister came when we were here. Full credit to my Mum and Dad. Every time I talk to them about it, I get emotional."

Crichton's 24-year-old brother Christian, a winger for the Bulldogs, provided more insight into their humble upbringing.

"We're grateful for everything we have. We didn't have much growing up but we had enough; we had our family, each other," Christian said.

Watch Stephen run around on ladder-leading Penrith's lethal left edge and everything he does looks smooth. Effortless.

So it's hard to fathom that a bloke who's scored 14 tries in 2020 didn't show much natural ability as a youngster, according to Christian.

"But he was that kid that was always in the backyard kicking the empty bottle around. He was always outdoors," he said.

Crichton is among the latest in a fabled line of Patrician Brothers, Blacktown students to graduate into an NRL star. That seemed a long shot when he was in Year Nine.

"I was playing at St Mary's [junior league] - div three. I couldn't make the ones or twos side. There was heaps of gun players back then but they don't play anymore," Crichton said.

"I made the move to St Clair. I met the coach there, Jason, and he just asked me, 'What position do you want to play?' I was telling him that I just wanted to play div one because I hadn't played before."

Christian added: "He started off in the halves, that's where he gets his ball skills from. He had a mad growth spurt and got chucked wider."

Not only did that growth spurt help the now six-foot-three Crichton's rugby league career - he was soon brought into the Panthers system - it made him an ideal height for basketball.

"I had one mate who went to America and he was talking to me about taking basketball serious, because he reckons that I can take that path as well and go a far way with that," Crichton said.

Ben Harden, Crichton's first coach at Penrith, had no issues with the outside back juggling two sports.

"He would miss Jersey Flegg [under-20s] training on a Thursday afternoon because he'd be playing MCS [Metropolitan Catholic Schools] basketball, which we backed," Harden said.

"I actually encourage our players to play another sport, I think it's good for their skill-set and their mind. We had the school ringing going, 'Can Stephen still play basketball?' in Year 12."

Harden had "no doubt" he could have been a basketball success.

So instead of dunking or taking marks, Crichton's height and leap are used when he plucks halfback Nathan Cleary's bombs from the sky.

He started off in the halves, that's where he gets his ball skills from. He had a mad growth spurt and got chucked wider.

"The best players we have at Penrith all have a really good background in multiple sports," Panthers head of performance Hayden Knowles said.

"Even guys like Jarome Luai and Nathan Cleary, they played soccer until the age of about 12.

"I'm massive believer in letting them play everything ... Stephen Crichton is probably the poster boy for that."

And his basketball skills haven't waned.

"In the COVID break, I asked him to post us a little video of him slam-dunking because I wanted everyone to do some basketball for their athletic development," Knowles said.

"He posted this video to the boys on the WhatsApp page - it was freakish. You know those slam-dunk contests where they bounce the ball and they're in the air and reach out with it in one hand?

Music is another of Crichton's talents.

"I play guitar, drums and sing a bit. It's all from church," he said.

"As the pastor's kids, they would drop us in first and we would be in the band. That's probably where I got the musician in me from."

Crichton credited elite player development manager Harden - who shocked the speedster by selecting him in the under-18s SG Ball side a year young - with imparting much of his league grounding.

"And the amount he enjoyed his training, especially for a player that was new to a system," Harden said.

"In six weeks [of SG Ball he] had improved and gone past nearly all players in the competition that had been around for many years."

There was a "lightbulb" period where Harden realised Crichton had the mettle for first grade.

After winning the 2018 SG Ball title, Crichton and prop Spencer Leniu played in the Jersey Flegg under-20s team as well as turning out for Patrician Brothers in the NRL Schoolboy Cup.

"They ended up backing up to play in a National Schoolboys final the same week as the Jersey Flegg final," Harden said.

"Effectively, for 18-year-olds, they were playing in two competitions in semi-finals and grand finals in the same weeks.

"I was driving them from school training to take them to do recovery on their own at an off-site place.

"Their professionalism and will to win at that age, and the influence they were having on both games, was astonishing."

Crichton lost both grand finals but Harden said he was "one of the better players on the field" despite the results.

An NRL debut came in round 21 last year - a win against Cronulla - and Crichton has now cemented his spot in Ivan Cleary's team.

Knowles is always nervous when young players have a fast entrance to the NRL  - "if something comes so easy are they going to take the training side seriously?" - but Crichton has eased his concerns.

"His fitness test results are pretty impressive. It was really pleasing to see he's got a big motor," Knowles said.

"At the start of the year, Ivan would throw him into the team as a fullback, so he's got an engine to play fullback.

"To have a fit centre is pretty handy. Usually centres, if any position in the game, struggle with fitness. There are some teams in the comp where their centres might not be as fit as the coach would like."

Knowles said the likes of Dean Whare, James Fisher-Harris, Nathan Cleary and Zane Tetevano have set the standard for Crichton.

Success hasn't changed his down-to-earth personality. Brother Christian described him as a "joker" and a "pest".

"He doesn't take anything serious, everything's a laugh. At home you can't sit around him because he always farts," Christian laughed.

"I swear, I'm not even joking. He always farts for like no reason."

Harden also painted a picture of a jovial character.

"He's super positive, he's got a great perspective on life, although he wants to win in everything he does. He's got a very strong faith and he's very strongly connected with his family and friends," he said. 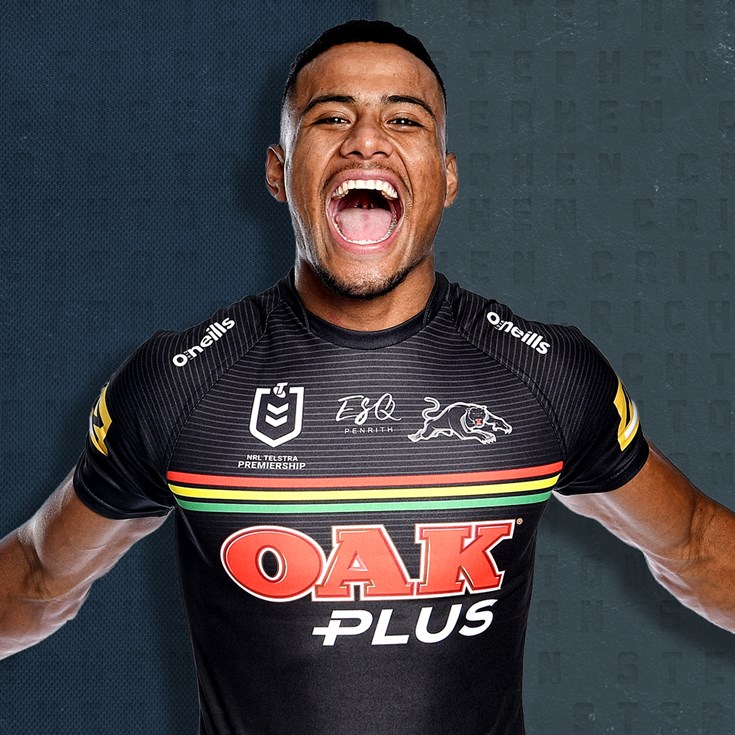