News that South Sydney local junior Alex Johnston is set to stay was met "with the most cheering and clapping I've heard for a long time" from the Redfern sheds according to Wayne Bennett.

The Rabbitohs officially announced on Wednesday afternoon that Johnston would be staying after agreeing to a two-year extension.

This comes after he had earlier this season been told the club could not afford to keep him due to salary cap pressures.

The new deal is a significant boost for both club and player given the 25-year-old's popularity with the Rabbitohs faithful having scored 97 tries from 138 NRL outings.

As reported by NRL.com on Tuesday, Johnston had fielded interest from Melbourne as a potential replacement for Josh Addo-Carr, only to knock the Storm's approach back.

Cook backs Smith to play on

It's believed he will stay at Redfern for below what he could have earned on the open market as one of the NRL's most prolific try-scorers.

Bennett said news of Johnston's looming retention was celebrated by his teammates as they prepare for Thursday's clash with Wests Tigers.

He's a Souths junior and it's really important ... that we could maintain that situation

Wayne Bennett on the retention of Alex Johnston

"When we said [to the players] there was a pretty good chance he would stay on, there were a lot of happy players," Bennett said.

"It was certainly the most cheering and clapping I've heard for a long time in the change room."

Asked about the salary sacrifice on Johnston's part to stay with South Sydney, believed to be over an amount in excess of six figures, Bennett said: "We all make sacrifices here.

"You can't build a really good team or a really good club without sacrifice. I'm sure there are a lot of other boys in the same boat as well.

"We're just pleased to have him and pleased he can stay on. He's a Souths junior and it's really important to the club here that we could maintain that situation."

Bennett also put little stock in reports linking him to a potential return to his old Broncos stomping ground, despite being quoted in a NewsCorp article that raised the possibility on Wednesday.

Bennett was quoted in the story as saying "things with the Broncos are speculative at this stage", but did say he was "humbled" by the potential of his messy sacking two years ago being put aside for a potential return as a coaching director.

His initial response came after Brisbane chairman Karl Morris also said he would consider taking such a move to the club's board, but Bennett dismissed the notion in his weekly press conference as "speculative".

"No one at Souths has told me that," Bennett said of suggestions he had the Rabbitohs blessing to leave at the end of 2020 if he lands another job elsewhere.

"And that discussion has never been had here.

"I’ve had no discussion with anyone about [a Broncos return]. It was a speculative piece of journalism.

"I’ve had no discussion with anybody from Souths or Broncos or Queensland Rugby League - nobody.

"You can talk as much as you like about it but you're not going to have me buy into that." 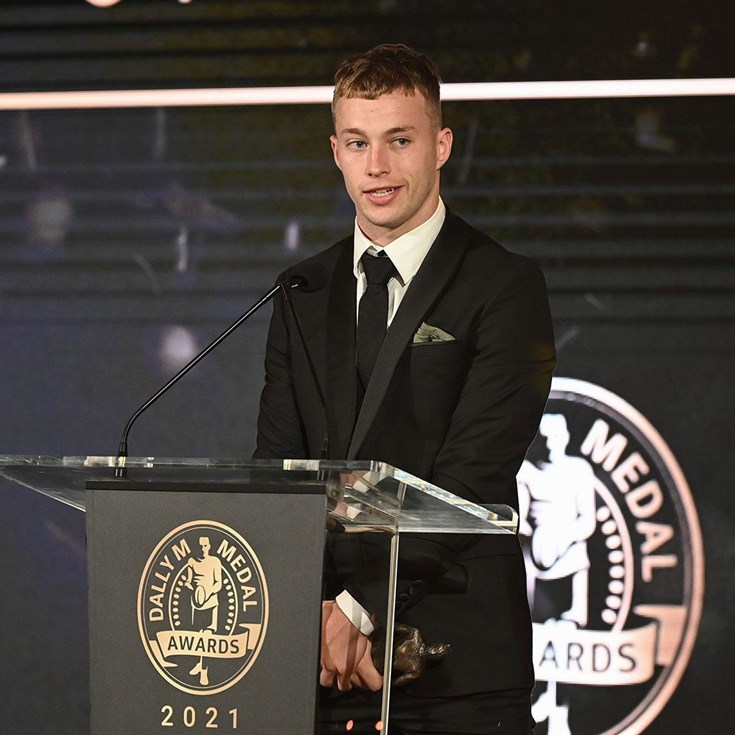 Abdo opens the second instalment of the 2021 Dally M Medal