Cronulla are set to kick off more than $3 million in player contract decisions and talks around coach John Morris's future, however negotiations with Shaun Johnson will be delayed until his recovery from an Achilles rupture is well under way.

Sharks CEO Dino Mezzatesta has dubbed their 2020 campaign a "pass mark without question" given the rise of several local juniors and Morris's second finals appearance under considerable off-field duress.

But with end-of-year reviews beginning this week, the fact that four of Cronulla's five biggest earners come off contract in 2021 now comes under the microscope.

Johnson, Matt Moylan and Josh Dugan (all understood to be earning around $800,000 or higher) and Aaron Woods (believed to be on roughly $600,000) will be able to field official rival offers from November 1, with the Sharks to weigh up their 2022-23 roster structure over the next three weeks.

The season-ending Achilles tear suffered by Johnson has put extension talks with the Kiwi half on hold until at least early next year.

Talks had been flagged off the back of Johnson's best campaign in years – his 23 try assists from 16 games are still the most by any player – until he went down against the Roosters last month.

Facing a minimum six-month recovery period that will have Johnson battling to be fit for the start of next season, the Sharks will shelve contract discussions until the 30-year-old is well into his rehabilitation.

"It's a shame SJ got injured when he did because he was certainly best on park and we certainly missed him out there," Mezzatesta told NRL.com.

"Not taking anything away from Connor Tracey and Chad [Townsend], they put in a great first half against the Raiders ... It's just a shame for SJ because just at a time when we should be talking about his career beyond '21 with the Sharks we've got to wait and get him through a rehab which is more important than anything."

Moylan is reportedly set to be given permission to talk to rival clubs about an early release for next season, though Mezzatesta declined to comment on those suggestions.

The injury-plagued fullback, as well as Dugan, Johnson and Woods will be on the open market next month though, with any new Sharks deals unlikely to be sorted by November 1.

Next season will also be the first of Morris's tenure when he is operating with a full salary cap after wearing $353,000 penalties in each of his opening two campaigns as head coach.

However, the club won't be making any significant inroads in the player market until 2022.

Talk of Shane Flanagan returning to the club once his NRL head coaching ban expires next season continues to do the rounds to Mezzatesta's bemusement.

Along with the Sharks' biggest earners, Morris's own future will be broached once more after preliminary discussions were put on hold leading into the finals.

"We've got some considerations with the players off contract, there's a quite a few people off contract next year so there's some big calls," Mezzatesta said.

"We will have to get onto that pretty quickly though.

"We always wanted to concentrate on the finals first and not have any distractions, and that's how it went. It's a shame we're out but the players can hold their heads high. Now is the time to start really getting into the details of those questions.

Katoa intercepts a pass to score late in the match

As players prepare to leave Cronulla's COVID-19 bubble with a club presentation event that is hoped to include family members, Mezzatesta sees room for improvement and the potential to do so.

"It is a pass mark no question because we're playing semi-final football in a tough, tough year," he said.

"But would you say that we're all there absolutely thrilled with it too? Probably not given our roster is a formidable one.

"We believe in our roster and we've got some serious talent. Take nothing away from the boys, they had a strong year and the effort they put in, you can't question it.

"Some of the players and some of the talent we've blooded this year we've shown we've got a foundation to be semi-final material for a long way to come.

"It's just cranking it now to get that momentum for a top four spot ... It's definitely a pass mark but the club knows it can do much better." 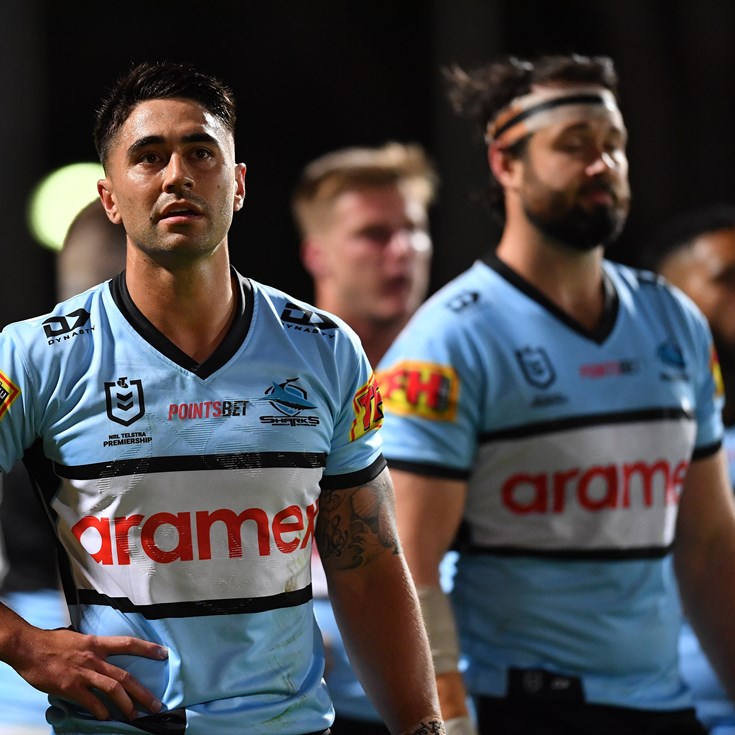