Suliasi Vunivalu is already eyeing off a return to Melbourne after his teammates learned a Fijian hymn to give him a moving farewell long after the masses had left ANZ Stadium.

Vunivalu's final outing in purple proved a spectacular one on Sunday night, with his 80-metre intercept of Nathan Cleary's long ball a critical 12-point swing in the Storm's 26-20 triumph.

The Fijian flyer told NRL.com he is "still having second thoughts" about his lucrative return to rugby with the Queensland Reds on a two-year deal that was confirmed last December.

Financially the move is a no-brainer for the 24-year-old winger and his young family, but he has explored more than once this year whether the Reds contract would be honoured given rugby union's financial struggles after the COVID-19 pandemic.

In a nod to the esteem Vunivalu holds among his teammates, the Storm returned to the soggy ANZ Stadium turf at 1am with a moving farewell for their star winger.

NRL.com understands Melbourne players learned the words to the Fijian hymn, "Noqu Masu", while in camp on the Sunshine Coast.

The song has provided some stirring moments throughout rugby league's recent history, having been sung by national side, the Bati, before games since the 2008 World Cup.

Speaking before receiving his emotional send-off from his teammates, Vunivalu said he would be well and truly open to a Storm reunion at some point in his career.

"I want to come back and finish off here some day," he said.

"I'm still having second thoughts about [his rugby move], to be honest.

"I want to stay but I've got to take that new challenge for myself.

"And there's younger boys coming through the club too so I'll give way to them.

"I'm trying not to think about that tonight, I'm in the moment now and celebrating.

"I'm very, very happy right now. It's my last year so going out with a ring is very special.

"I was thinking leading into the game how tough it would be to go out on a loss. This is my fourth grand final and I've had two wins, I definitely didn't want to be 1-3.

"I'm so grateful to Craig [Bellamy] and everyone here. I didn't know anything about rugby league when I first turned up.

"But I was always a big fan, so when my manager told me 'Storm want you' I was straight on it. 'Take me there, I want to meet Billy Slater'."

While the Storm have made a particular point of playing for their home state of Victoria, for Vunivalu that includes the partner and two young children he has only seen via daily video chats since Melbourne's relocation to Queensland.

"My family's been back in Melbourne all season, there's a few of us in that position," he said.

"I've only seen them by FaceTime. It's hard for sure, but this is my job and this is how I put bread on the table for them.

"They understand and there's a lot of people back in Victoria doing it much tougher.

"I've got my siblings from Fiji, my two kids and my missus. I think the kids were allowed to stay up for the game."

Vunivalu exits for now as one of the game's elite finishers with 86 tries to his name from just 111 Storm appearances.

Of all those four-pointers, none have garnered quite the reaction from Bellamy as that 30th minute runaway effort from Cleary's looping long ball.

The veteran coach rode Vunivalu's sprint from the coach's box like Seinfeld's Kramer on one hell of a mudder, out-celebrating his own player as he shook off a late challenge from Panthers five-eighth Jarome Luai.

"I was watching [Dylan] Edwards on my left and had no idea there was someone coming from behind," Vunivalu grinned afterwards.

Vunivalu picks off a Cleary pass

"Luai almost got me there. I didn't see him, I should've been watching the big screen!

"I like to get up hard in defence and once I saw that ball floating in the air, I was always putting my body on the line.

"I was thinking before the game 'this is your last game, put your body on the line'. I didn't want to be sitting there thinking 'what if?'.

"A while ago I probably wouldn't do that. I would probably just let [the opposition] catch it and tackle them. But that's a big moment and you've got to take it." 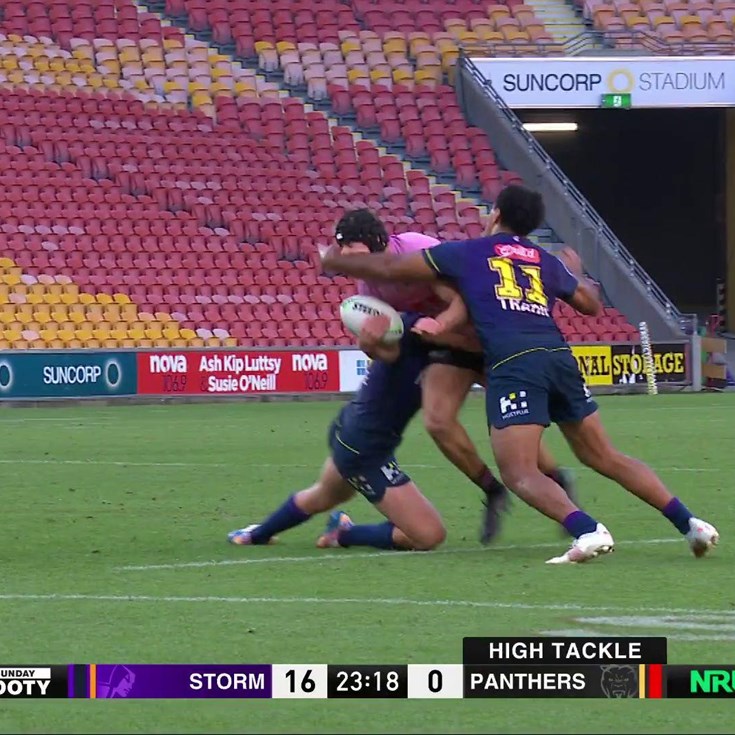