Creating a junior Kiwi Ferns program to help develop young female talent, particularly in regions outside of Auckland, are among the goals Honey Hireme-Smiler has set out to achieve in retirement.

The Kiwi Ferns legend shocked the women's rugby league scene last month by announcing she was hanging up the boots just 12 months shy of the 2021 World Cup.

Injuries, family life and off-field ambitions finally caught up with the 39-year-old, who had played out an incredible 18-year career at the international level in both rugby league and union.

On November 8, Hireme-Smiler was celebrating with her past and present teammates following the Kiwi Ferns' win over a Fetu Samoa invitational side before confirmation of her retirement was made official.

"Going into the last Test match I had already made the decision," Hireme-Smiler told NRL.com.

"I told my family it was probably worth them coming along because I was retiring but they laughed it off and said they'd heard it all before.

"But I'd actually thought about it quite a bit throughout the year and planned on announcing it earlier but then with COVID hitting and it just being one of those years I left it.

"Then the body came right and I thought I could keep going. I was aiming for the World Cup but the thought of going another 12 months seemed too far to reach.

"I knew I wasn't going to be able to play the game the way I wanted to, no matter how hard I kept training.

"I wasn't getting any faster and there were little parts in my game that improved but the baseline standards I didn't feel like I was meeting them.

"I just knew my body was tiring and I couldn't recover as quickly from the contact so it's a good time for me.

"And enjoyment was a huge part of it. That's what I'll miss the most, and probably the feeling of running down the sideline and fending someone in the face."

A star is born

Arguably one of the greatest players to ever lace on the boot, Hireme-Smiler recalled the opening stages of her Test debut against NZ Maori in 2002.

She was 21 and came into a dominant Kiwi Ferns side at the peak of its powers – running through the opposition at will and piling on points from everywhere.

"They kicked the ball to me first from the kick-off and I dropped it," Hireme-Smiler laughed.

"And the message from the kick-off was specifically to catch it on the full so I ran towards it, let it bounce, knocked it on and it went out."

How did that go down with the rest of your teammates?

"I bounced back with three tries in the same, so I guess I ended up doing alright," she said.

"But the biggest thing I really remember was my first haka, that was huge. I had my grandfather and Mum there, it was emotional and I'm not a very emotional person.

"Playing alongside women like Trish Hina and Rona Peters … just having the privilege to play alongside players like that, who at the time were in the halves, they would give me good ball and tell me what to do.

"It was incredible how advanced they were in terms of game management.

"Those players basically did the work that made us as outside backs look good. Laura Mariu was great at working with people and how she used to hit the opposition hard - I'd hate to have been on the receiving end.

"And Luisa Avaiki, all I remember is her just running over the top of players. I had the mindset I always wanted to play in the same team as her so I didn't have to tackle her."

As those players began to fade out with their own retirements, Hireme-Smiler became the pin-up for the Kiwi Ferns over the next decade.

She was instrumental during her four World Cup campaigns including the Kiwi Ferns' latest in 2017 where they fell short to the Jillaroos in Brisbane.

She starred with 13 tries in four appearances, including a record six tries against the Cook Islands in Sydney, a hat-trick against England in the semi-final and a double in the final against Australia.

"I hope I've left some self-belief behind for all the younger girls coming through," she says.

"I came from a small town with humble beginnings but with self-belief and family support mixed in with hard work you can make it.

"Not just on the field but off the field as well. I always wanted to give back to the game, whether it be picking up the cones after training or the water bottles or helping prepare the bus.

"It doesn't matter that you wear the black jersey you've got to be a good person as well.

"That's the legacy I hope I've left. You've got to acknowledge the women that have gone before us."

The Kiwi Ferns were once the dominant nation in the women's game but have been overtaken by Australia since their history-making 2013 World Cup triumph.

As the development across programs in Australia continues to improve, Hireme-Smiler wants to work with the NZRL to ensure the Kiwi Ferns can recapture their status as the sport's juggernaut nation.

Part of that process includes the Warriors, who have been competitive but not overly successful in the NRL Telstra Women's Premiership over the past three seasons.

Uncertainty around the side's long-term future was also evident in 2020 with the team forced to play out of Australia due to the COVID-19 pandemic.

With self-belief and family support mixed in with hard work you can make it.

Only five travelled with the remaining players made up of Australian talent.

"I know the club is keen to continue with the women's Warriors side," she said.

"They invested a lot into getting the team involved this year and I'm hopeful it will keep going.

"For all the Kiwi girls it's important the Warriors are involved in the NRLW in some capacity, but in saying that we just came off our own new championship in New Zealand which ended up being a strong competition.

"There were a lot of girls who couldn't play in the NRLW because of the restrictions who took part in the first year and it created very healthy competition.

"That's a genuine pathway to take them through to the Kiwi Ferns if they don't play in the NRLW."

Hireme-Smiler will continue with her television work commitments for Sky Sports in New Zealand before embarking on her coaching endeavours.

"I am happy to help out in any capacity," she said.

"I'm going through my certificate in coaching course at the moment but I'm in no rush for the World Cup, I'm not looking to jump on that bandwagon.

"I'm willing to invest my time into the grassroots level and within the community.

"I'm looking forward to creating a junior Kiwi Ferns team and want to be involved in that and working with the youth.

"But it won't be in the next year at least, I want to spend some time with family." 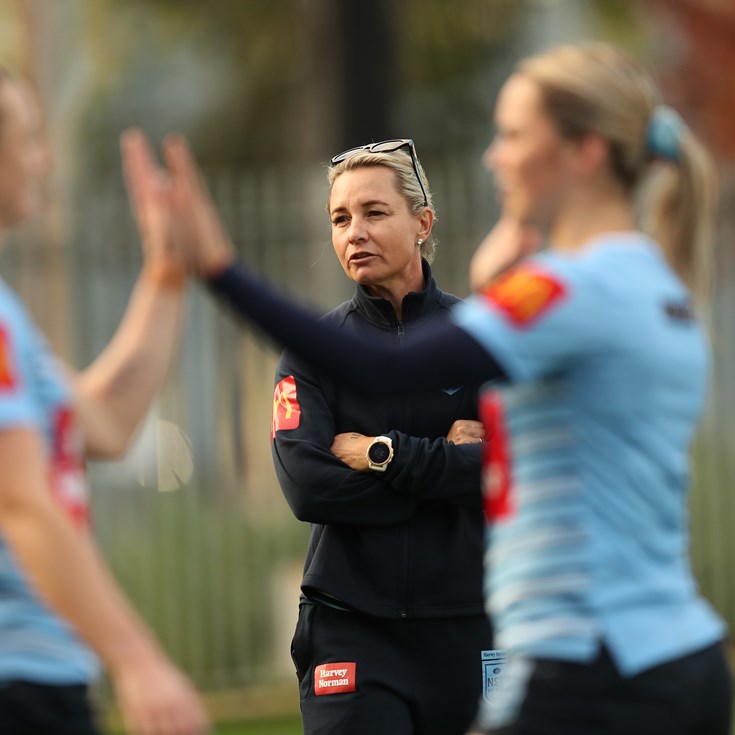