So, here we are, some 136 days after Cameron Smith hoisted the Telstra Premiership trophy skywards on seemingly the perfect stage on which to say goodbye, the Melbourne maestro has announced his retirement.

Just as he controlled the tempo of his 430 NRL games in Storm colours, Smith did so for his big announcement. He’d never been rushed or flustered on the field so why would he let anyone dictate terms to him now?

"I still felt like my form was good enough to play in the NRL but once I spent good quality time with my family up in Queensland, I knew the time was right to walk away," the 37-year-old said on Wednesday.

And rest assured, in the wake of Smith’s decision to call time rather than play on at Gold Coast or Brisbane, that’s exactly what league fans will do long into 2021 and beyond – argue about where he fits in the pantheon of the greats.

A career like no other: The best of Cameron Smith

For Craig Bellamy, the man who coached Smith in all bar two of those 430 games, there is no doubt about his place in history.

"He’s the greatest player I’ve ever seen," Bellamy said. "From what he's done, his record of well over 400 games, no one's gone over 400 games and he's also played over 100 representative games for Australia and Queensland in that time.

"With the success he's had as captain as well, it's quite remarkable and hasn't been done in the game before. I really can't see it happening again."

Debates will rage about how Smith compares to those past champions and how he rates alongside his contemporaries Darren Lockyer, Johnathan Thurston, Billy Slater and Cooper Cronk.

All Queenslanders, all superstars, all worthy of serious consideration when more Immortals are inducted, although the rules state they must be retired for five years before you can enter the Hall of Fame. And only Hall of Fame members can become Immortals.

With the legends of yesteryear, we rely on grainy footage and the testimony of the game’s historians and revered senior citizens to make our judgments.

Farewell to a legend: Paying tribute to Cameron Smith

When it comes to Johns, Lewis, Beetson, Meninga and Langlands, I was lucky enough to watch them in the flesh and got to marvel at their outrageous talent.

Just like Smith, all five of those men were born leaders, captains by name and by nature, inspiring great deeds from their players and forging careers which became the stuff of legend.

Smith’s first full season in the premiership in 2003 was also my first season as editor of Rugby League Week, the magazine which created the Immortals in 1981 and nurtured it for 36 years before the NRL took ownership of the concept in 2017.

The following year the NRL honoured Meninga, Provan, Burge, Brown and Messenger with inclusion in the Immortals, five magnificent men whose deeds spanned more than eight decades and expanded the game’s most exclusive club to 13 ... a fantasy footy team for the ages.

All too often we get caught up in the present but we should never forget those who dug the well.

Every time we mention names like Langer or Kenny or Sterling or Lockyer or Cronin or Mortimer we are honouring their achievements and making sure they are never forgotten.

And in 20 or 30 years from now, when the story of Melbourne’s emergence as a superpower and the Maroons’ Origin dynasty are told, the name Cameron Smith will be spoken about with the same reverence as Provan in the 1960s, Fulton in the '70s, Meninga in the '80s and Johns in the '90s.

They’ll marvel at how Smith could pick apart an opposition defence with the precision of a surgeon or make 50 tackles in 80 minutes without seemingly raising a sweat.

"He gets through a mountain of work but never looks buggered. If the game went for 300 minutes he’d still play it the way he does. He is an ironman," Maroons legend Darren Lockyer told me in 2013 when Rugby League Week paid tribute to Queensland’s eight-year Origin reign.

They’ll wax lyrical about his resilience and self-belief.

"His mental toughness is remarkable. No one can break him. To play in the position he has for as long as he has and play that amount of games, you need to be quick between the ears and mentally tough and he has both those qualities in spades," the great Johnathan Thurston said in 110 Years of Rugby League in 2018.

New No.1 Smith ready to fight for Storm future

And while his name will fit comfortably in the same sentence as the Little Master, Big Artie and King Wally, his longevity and list of achievements will demand a chapter all their own, from 56 Tests and three World Cup wins, to 320 games as Storm captain, two Dally M Medals, two Golden Boots, two decades in the relentless pursuit of excellence.

Having spent 20 years creating a legacy and 136 days deciding whether the story should continue, Smith can now put his feet up and reflect on a remarkable career. 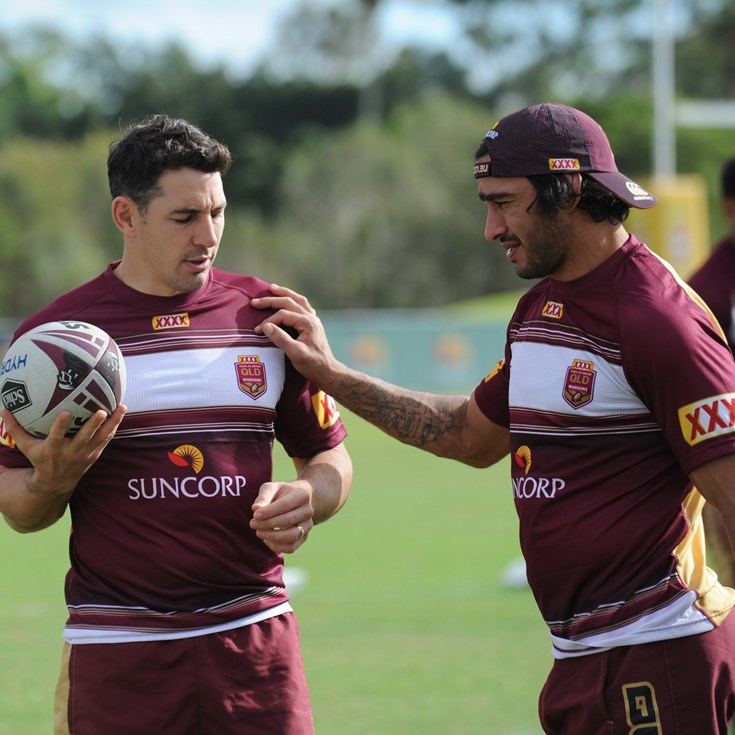