Before Taniela Paseka made the grade in rugby league, unsure that he would ever get into the NRL, the towering teen followed his dad into long hours of factory work.

Before every Sea Eagles shift he pulls this season, Paseka will take a permanent marker and scrawl "MUM" on one wrist, and "DAD" on the other.

It's a simple tribute to his parents, Leone and Ana, who set him on his way to the NRL, but won't be there to see him in his prime.

His mother passed away when he was five after battling breast cancer.

His father, who would work 9-5 shifts "at the wrong end of the day", to put food on the family table but would still always be front and centre for Paseka's junior footy games every Saturday on no sleep, passed away six weeks ago.

Leone Paseka suffered a heart attack in his sleep, aged 58, leaving the Manly forward and the six siblings he raised as a single parent devastated, but forever grateful for "the hardest working man I've ever met".

"It's been the hardest month of my life," Paseka told NRL.com.

"My dad was my last parent, losing him was tough, the toughest thing I've ever dealt with. It's still emotional and I tell myself to make him proud.

"I'm smiling telling you this because he was just the best dad, I can't help but smile when I think of him.

"He looked after all of us in every way, by himself, I still don't know how he did it.

"We had help too but he also did so much on his own at home every day.

"He'd work a 9-5 shift at the wrong end of the day at the Berri Juice factory from 9pm to 5am.

"He'd come home every day, cook for us, get us off to school, then finally get his sleep and be off to work the next night.

"He did that from when he moved to Australia [18 years ago] right up until he died. That shows the kind of man he was to me – humble, giving, happy and very, very hard working."

Paseka knows all too well the twists and turns league and life can take after a seismic 2020 for the 192cm, 120kg forward.

But for the COVID-19 pandemic he would right now be the NRL's latest NFL convert.

The 23-year-old forward was set to join the Indianapolis Colts' pathways programs after meeting NFL scouts in New York 18 months ago.

Paseka was ready to take a life- and career-changing leap until midway through last year when his partner Kobi Ruzzene fell pregnant and amid the uncertainty of the pandemic, they pulled to pin on his US move.

Again, Paseka is grateful. The call to stay in Australia meant he was around for those final months with Leone, his softly spoken inspiration from his earliest days.

"Dad wasn’t a big man at all. I think by Year Seven I was already taller than him, and he didn’t say too much, he was pretty shy," Paseka laughs.

"But he loved his footy. Just loved it. He'd always be at my junior games straight after work.

"He'd watch our sport, then be off home for a few hours sleep before going to work again.

"His English wasn't the greatest, but every year round one, he'd give me his pep talk. 'Nela play hard, run hard'.

"He didn't get to many of my NRL games because it would clash with his work.

"So he would watch the replay and be into me, picking things out in my game and telling me what I needed to work on."

Paseka's family has long kept footy in perspective, even miserable losses like last week's 42-point thumping from the Roosters.

As well as writing his parents' names on his wrist tape before Friday's clash with St George Illawarra, he has another new addition to his game-day ritual.

"Carter's five months old now and he'll be there at the game," Paseka says.

"He's a long, tall baby and we named him after [All Blacks icon] Dan Carter because my missus likes him and I'm a massive Vince Carter fan out of the NBA.

"I'll see him in the crowd and that's part of the new game-day tradition – I'm honouring my parents and playing for him too.

"I'm so glad Dad got to meet Carter before he passed, he loved him so much and like I said, I keep smiling when I'm talking about it all. That's what he would've wanted." 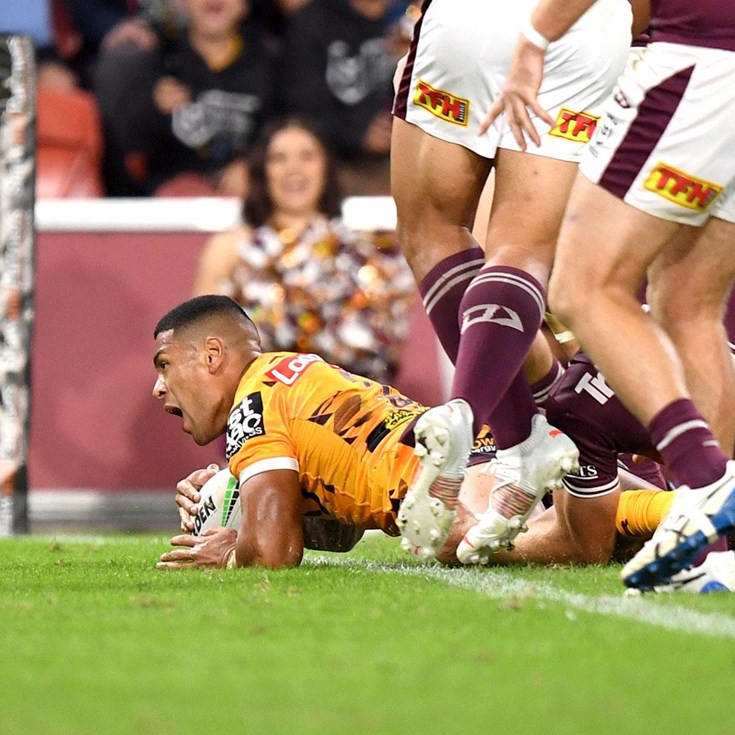 Isaako tries to spark the Broncos with stunning solo effort

Taupau the playmaker for Keppie to get his first NRL try