The 22-year-old Cessnock Goannas junior scored his first NRL try, was involved in the lead-up to two others including Kalyn Ponga's late match-winner, and saved two in Newcastle's morale-boosting 26-22 victory over the Sharks at McDonald Jones Stadium.

Jones, who has always played as a middle or edge forward throughout his developmental years at Cessnock and the Knights, turned heads with an influential performance filling in at right centre after winger Hymel Hunt hobbled off with a hamstring injury in the seventh minute.

In almost 74 minutes Jones ran 11 times for 106 metres and made a line break, three tackle breaks and 24 tackles, and was never too far from the plays that mattered.

Knights coach Adam O'Brien explained after the game that Jones was also thrown into the fray on short notice when he made his NRL debut in a 14-14 draw against Penrith at Campbelltown last May.

Jones had been named on an extended bench and was not expecting to play when Lachlan Fitzgibbon was cleared to return from finger surgery.

But Fitzgibbon suffered a hamstring injury in the last few seconds of Newcastle's final training run the day before the game, earning Jones a late call-up into the 17, then he was on the field within 10 minutes after Mitchell Pearce and Connor Watson suffered game-ending injuries.

"When Brodie made his debut, it was after a captain's run last year, and I remember thinking, 'Geez, he's done a good job, he's done no preparation'," O'Brien told reporters after the Cronulla win.

"And I know when you're 18th man, you probably say that you're preparing to play, but just to get thrust into it after the captain's run – I said, 'Mate, you're in tomorrow', because we had an injury at the end of training – and he did a really good job then.

"So he's the type of kid that just goes, 'Righto, I don't have to over-think this, I just need to get out there and give my best effort', and that's certainly what he gave us.

"But he gave us that and so much more tonight where he came up with some really clutch plays defensively, then to put himself in the frame to receive that ball from Kalyn [to score in the 55th minute], then he was there again at the end [for Ponga's try].

"I think I counted in my head … he was in eight pieces of play that I stood up and applauded, so he's done a good job."

Jones said his only other experience at centre was 20 minutes against the Bulldogs in Newcastle's season-opening 32-16 victory last month, but he backed himself for the sake of the team.

"I suppose they've got a bit of trust in me because I'd done it a little bit before, but I just had to do it for a lot longer minutes and make sure I didn't screw up," Jones told NRL.com.

"I was meant to play in the middle in this game. That was going to be my role – Connor [Watson] and I were going to swap – but it quickly changed."

Jones could not explain how he found himself in the middle of so many crucial moments, including twice being tested by Connor Tracey's grubber kicks, forcing him to turn, sprint and scramble back to smother the ball in Newcastle's in-goal.

"I just knew I had to chase back. That's just a part of my job, to help out the best I can, and just try and put myself in the best position to negate tries or score them."

In the 30th minute, Jones tipped on a cut-out pass from Kurt Mann to Enari Tuala, who switched from centre to play outside him on the right wing, and Tuala's in-field kick led to Mann's try.

"I haven't really done too much of that but I sort of went with it and trusted my instincts," he said.

As for being on the spot to take Ponga's pass to score in the 55th minute, then combine with Tyson Frizell to send Ponga over for the go-ahead try in the 77th, Jones said he was in the right place at the right time.

"I was just thinking to catch it, and if I get tackled, it would be a slow restart," Jones explained.

"That's what I first thought but I heard Tyson calling for it inside so I just closed my eyes and threw it and hoped for the best, so it all paid off I suppose."

Jones was especially pleased to be involved in such a memorable victory to help friend and fellow Cessnock junior Brayden Musgrove celebrate his NRL debut in style. They were school-mates at St Joseph's College at Lochinvar, teammates for the Goannas and again in the Knights' junior ranks.

"I played Harold Matts and SG Ball with Brayden, so we've grown up together, went to school together, and we've been close mates all the way through," he said.

"It was a big day for us both, and pretty special to get a win like that … so it was nice to share that with him." 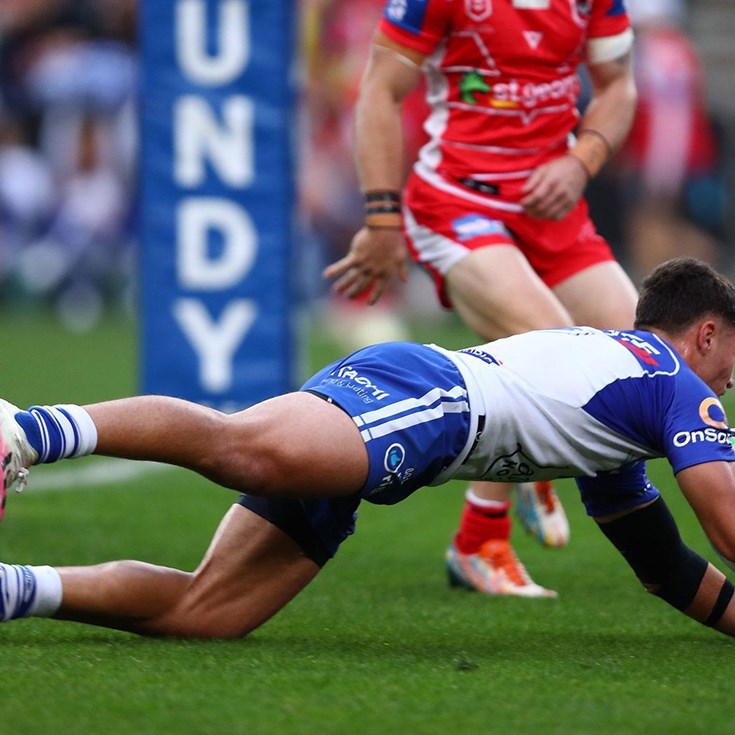 Round 14 charges: Marschke, Proctor suspended; two off to judiciary

A hard day's Knight: Clifford eager to enjoy some hits in new colours