Forty-odd metres out. Two metres in.

Hard to tell in the dazzling early morning eastern suburbs sunlight. Hard to miss the 1000-watt smile flashed afterwards though.

Mitchell is back in NSW camp.

Shades of that sky-blue, Viv Richards with a Steeden swagger, are back too, balanced with an appreciation for the finer things in rugby league and life.

Did he miss it?

"Most definitely, everyone does," says coach Brad Fittler.

"Origin, once you've been here and played for NSW, you realise there's not much like it, it's the most intense footy you'll play. It's where you get to prove yourself.

"When Latrell's got a point to prove, that normally gets the best out of him."

As Mitchell himself pointed out, along with a pointed "you won't get a line out of me" last week, he, Fittler and the entire NSW set-up see no point in raking over his 2019 axing and the acrimony that followed.

Just over two years to the day since a Suncorp series opener when Mitchell's focus seemed elsewhere, his NSW teammates see a markedly different man alongside them.

From Rooster to Rabbitoh. Centre to fullback. And not at all insignificantly, 21 to 23.

No gentleman’s agreement: Green, Fittler have final word before Origin I

"I can't wait," says Josh Addo-Carr, who is hot to trot down the Blues' left-edge with his great mate for the first time in two years.

"We're making up for lost time. I think being a part of the spine [at South Sydney] has put some leadership on him.

"Playing fullback, you have to be a leader because you're steering the boys around on the field.

"That's such a big part of the job, you have to help your teammates, they rely on you in a different way. I think Latrell's talking has developed a long way there.

That's not to suggest at all that Mitchell didn't care or want to work for his teammates previously.

There's arguably no greater insult in sport than that implication.

Instead it's a mark of the transformation Mitchell has undertaken.

From centre – the toughest defensive role in terms of split-second, game-changing decision making – to fullback – the most gruelling aerobic position with more game-wide defensive responsibility than any other player.

Damien Cook has seen a similar development in Mitchell when the Rabbitohs assemble at their Redfern base.

"I don't know what he was like at the Roosters but I do know what his first year was like at Souths and he's really grown in terms of our team meetings," Cook says.

"He's more outspoken in our vid sessions, and you respect what he's saying because it's a guy who has won premierships and done plenty.

"It's mostly tactical stuff. He can pick apart a defence and explain why things work or don't.

"When he offers something it's usually pretty on the money."

Roosters and Blues captain James Tedesco was the reason Mitchell never returned to fullback after his debut 2016 season.

Instead Mitchell made his mark as a Dally M Centre of the Year in two premiership-winning sides, putting the title on a platter in 2019 with his late flick pass to send first Daniel Tupou, then Tedesco en route to the tryline.

"Take all that power and strength, all that size, and play at fullback, that's not easy," Tedesco says.

"It's a very fast game at the back these days. His fitness has gone to another level, it's a credit to all the hard work he does."

For everything that's changed from the outside looking in, Mitchell himself sees mostly the same in the mirror.

"I don't think I've changed too much as a player," he says.

From one side of Anzac Parade to the other – with another bouncing baby Mitchell added along the way – to being an instrumental, inspirational game-changer on racism and abuse in Australian sport, it's off the paddock where he and most others see the true transformation.

"I think it is the off-field stuff for me, that's where I've been a lot better," he says.

"I'm surrounded by good people, and if you've got good people around you, you do good things.

"From family to management down to my young kids. The little things, man, it's the small details that keep you going and on track every morning. I see them and think, this is why I do it."

What Fittler has done with NSW over the course of his three years in charge is in part why Mitchell is smiling and swaggering in camp once more.

A 2-1 series-winning record has helped turn the Origin tide, albeit against a Queensland outfits sans first Cooper Cronk, then Cameron Smith, Billy Slater and Greg Inglis, after a decade of Maroons dominance.

Even without a personal "fire in the belly" to be back in the NSW fold, redeeming last year's shock series loss looms large when Mitchell's own Origin memories over the years are recalled.

"We had too many of those fellas, the NSW kids who went for Queensland," he laughs.

"I think that's changed now, and it's a good change. We've got a lot of great players in this NSW team now and people love to watch them play.

"They're great entertainers, I love being a part of it. I think there's real pride in the jumper again and it's awesome for these players and Freddie to give back to the whole state."

Who will be the best of the Blues debutants?

It all makes for one hell of a build-up to Mitchell's first Origin run in two years, with a distinctly Maroon carpet to be rolled out in front of a sold-out 28,000-strong Townsville crowd.

Which brings us back to that 40-metres out, two-metres in drop-punt at Blues training.

As far as match-winners go on either side, few can compare with his proven track record.

So often compared to Rabbitohs predecessor Inglis, Mitchell's similar traits of power, pace, strength and guile have the potential to impact Origin in the similar fashion.

"I think it's the team that lifts you in Origin to be honest," Mitchell says.

"You've got to bring your best, everything you can because that's what everyone else is doing.

"It's the best of the best, and you want to represent everyone, your family, your people, your teammates and your state.

"I'm grateful to be back here and proud to be playing in the blue." 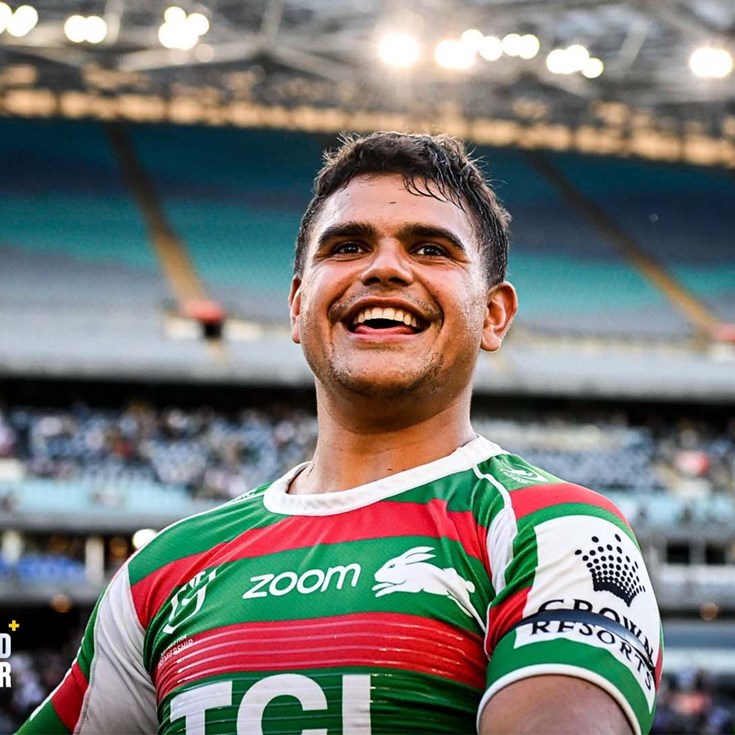 'I know what it takes': Latrell's premiership goal