Sam Walker's wonder season continued last week with a match-winning nine-minute cameo off the bench but is it time he was injected back into the starting side for the Roosters?

With Lachie Lam performing strongly in the No.7, coach Trent Robinson was able to hold Walker back until the final minutes on Saturday and then inject him into the game with maximum impact.

Not for the first time in his debut season, Walker kept his nerve in a tense finish and delivered the field goal that got the Roosters home over the Titans.

Now it's on to another sudden-death showdown with old foes Manly and debate will run long and strong in the lead-up to the clash as to whether the rookie sensation should be in the run-on side, as he has been in 17 of his 20 games this year.

Walker steps up when his side needs him

For & Against - Sam Walker should start for the Roosters

From the moment he burst onto the scene in round four with a try assist and three tackle breaks in a 32-12 win over the Warriors, teen sensation Sam Walker has looked at home on the big stage.

In just his second NRL game he put the Sharks to the sword with a try, three try assists and a line break and by his fourth game he was winning the Spirit of Anzac Medal for a dominant display against the Dragons at the Sydney Cricket Ground.

A week later, the kid from Ipswich ran rings around the Knights on their home turf at McDonald Jones Stadium, laying on four tries, scoring one himself and booting five goals in a 38-4 triumph.

All of this was done from the starting side, getting into the action early, getting a feel for the tempo, and then controlling that tempo like a player 10 years his senior.

The Roosters always knew they had a good one on their hands and with every assured performance he clocked up, Walker enhanced his reputation as the NRL's next big thing.

After playing every minute of his first eight games, Walker had a fortnight to freshen up as he was rested in round 12 and the Roosters had a bye in round 13.

Walker was back in the starting side in round 14 and stayed there for the next eight games, six of which the Roosters won despite a mounting injury toll and enough adversity to last them five seasons.

During the past few weeks, coach Trent Robinson has reverted to using Walker off the bench and starting the game with Lachlan Lam, who does a more than serviceable job.

The rigours of a long season had started to take a toll on Walker's body and the astute Robinson, wary of burning him out, took the opportunity to keep him out of the heavy early exchanges and wait for the right moment to unleash him.

That strategy worked a treat against the Titans, with Walker producing a trysaving tackle and the game-sealing field goal in his nine minutes on the paddock, but the time has come to throw the 19-year-old the No.7 jersey and let him work his magic against a Sea Eagles side coming off a demoralising loss to the Storm.

With his sharp footwork and brilliant vision, Walker has the skills to exploit any weaknesses in Manly's defence and get the Roosters away to a flyer.

It feels like an eternity since these sides met in the opening round of the season, the Roosters romping home 46-4 with Luke Keary calling the shots, Brett Morris scoring tries for fun and Walker honing his skills with the North Sydney Bears in NSW Cup.

2021 Moment of the Year nominations – September

In a rollercoaster six months since then, the Roosters have lost Keary and Morris as well as Boyd Cordner, Lindsay Collins and Joey Manu but still found a way to be competing for a third premiership in four years.

It's a testament to their culture and commitment that they are still in their punching at the business end of the season and Walker's stunning rise has been one of the keys to their success.

With eight tries, 19 try assists and 22 line break assists in his 20 games, Walker has lived up to all the hype and then some, putting together a highlights package a seasoned playmaker would be proud to own, let alone a rookie.

If the Roosters are to keep the dream alive and send their old foes out in straights sets they need all their guns firing from the kick-off, and that includes the whiz kid with the pedigree and the poise to steer his team to a famous victory.

Should Sam Walker start or be an interchange player?

The report on Sam Walker’s nine-minute cameo against the Titans wasn't long but the young prodigy still managed to be involved in the two of the biggest plays of the game.

Performances like that can only lead to people asking why Walker isn’t starting matches and getting more chances to work some magic with ball in hand.

We’ve all seen the way fellow young gun Reece Walsh, and more recently Jayden Campbell have played despite joining Walker among the lightest players in the NRL.

The big difference with that pair compared to Walker is they aren’t being asked to defend in the front line.

It’s not that they can’t tackle, it is just that you only need an elementary understanding of physics to know that a smaller person is going to find it hard slowing someone who has both force and mass well and truly in their favour.

Yes, Walker did make a crucial tackle in the final minute against the Titans, but that was a cover tackle after a long run down the field.

It is not the heavy-contact tackles expected to be made set after set that teams need from all their players during the cut-and-thrust of finals football.

Across the home and away season, when looking at each club's try causes by location (left edge, left, centre, right and right edge), the Roosters right channel (107) had more than double the try causes of any of the other four parts of the field, with the left (47) yielding the second most.

When it comes to try causes by a player, Walker (19) was third at the club this year and Manu (23) has the most, largely stemming from the games he has lined up alongside Walker on that right edge.

Like many other young halves who have come before him, Walker will get bigger and stronger as his career continues. Until that day comes, coach Trent Robinson may continue with the strong-defending Lachlan Lam and Drew Hutchison in the halves, at least until Luke Keary returns.

They can then leave their game-breaker to come on when his array of skills are most needed.

If Walker keeps playing nine minutes a match but turns those opportunities into match-winning plays, Tricolours fans will have more to smile about.

Once he puts some more muscle onto his slight frame, an 80-minute player who torments opposition defences for the next 15 years will be set free. 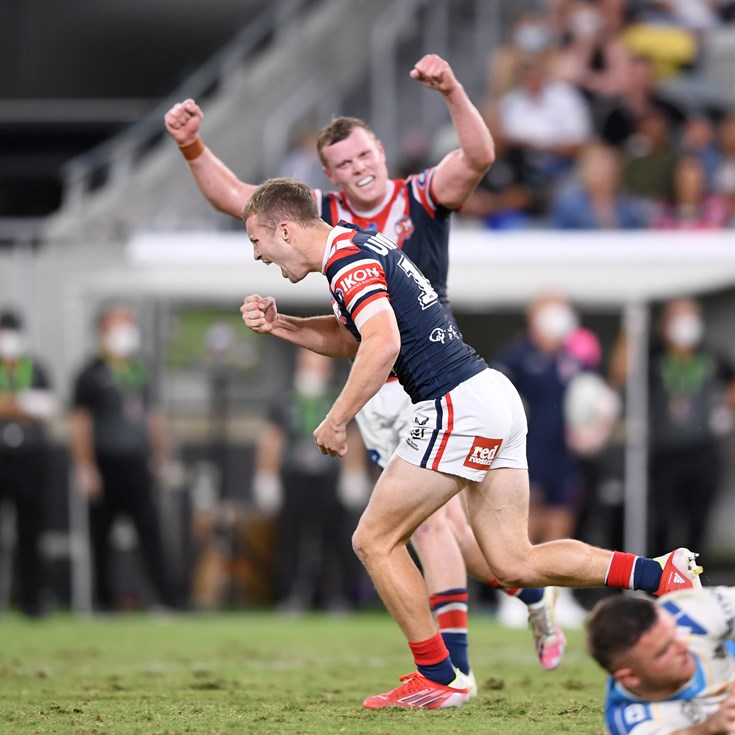 Presented By Telstra 5 days ago

For & Against: Walker over Walsh for rookie of the year