Ivan Cleary strolled over to Josh Reynolds after a training session at Campbelltown Sports Stadium a few weeks ago to give Reynolds the news.

That he – the hot-head from Belmore – along with four others, would captain the Wests Tigers in 2018.

"I was so shocked," Reynolds told NRL.com.

There wasn't much of a reaction. There was very little said. It was somewhat of an Ivan-like reaction from a man who ordinarily has no struggles expressing emotion.

"I went away and actually messaged Ivan later," Reynolds said.

"I said 'mate, I hope my reaction didn't put you off, but I was just so happy'."

"At the Dogs I just don't think I was looked at like that, and that's fine. Because at the Dogs they had a lot of senior players and leaders. They just didn't look at me that way. For [Ivan] to put me in that group of five blokes, it's unbelievable. I'm taken away by it."

Reynolds was a lot of things at the Canterbury-Bankstown Bulldogs. The heartbeat. The glue. The passion.

"I used to walk in there… it would just be like walking into home," he said.

But it's for that very reason he's now found himself at another club. He got too comfortable.

Some might call that bullshit. That the only reason Reynolds is wearing Tigers colours instead of blue and white in 2018 is because of a desire to build his bank account.

"People are always going to say that aren't they?" Reynolds said.

"People that probably don't like me will say 'oh you left for the money'. They can think whatever they think. I'm not being rude but I don't care what they think. I know what I went for.

"I had to sit down and think 'am I happy with the way my career is going?', and at the time I wasn't. My form at the back end of the Bulldogs is not what I like to pride myself on."

From the moment Reynolds met Cleary, he felt wanted.

Something he hadn't felt at the Bulldogs for some time. While his heart was telling him to stay, his second contract negotiation meeting with the Bulldogs painted a picture he couldn't ignore.

"There was a lot of talk about who might be coming to the club and I just knew that they might have wanted me there but it didn't really worry them if I left. That's just me being brutally honest.

"When I went back home from that meeting, I'm not going to lie, I was a bit disappointed. I was like, 'far out, I've been here for so long and so much has happened here'."

So he left. He accepted the big dollars, shed plenty of tears and did what he never envisaged he would do.

Who wants to be in the bottom eight? No one.

He's a Wests Tiger now, and has no regrets. Reynolds knows he has made the right decision, regardless of the popular opinion regarding his motivation.

"I don't want to be that guy that [my teammates] think has come here on a pretty good deal and just here to cruise," Reynolds said.

And in the confines of the club's Concord headquarters, Reynolds is doing just that. A ball hasn't even been kicked in the 2018 Telstra Premiership, but he's proving to those around him that he wants to be a key part of building something special at a club that has had very little to celebrate in recent years.

There's so much optimism at the joint venture club heading into Cleary's first full year as head coach. A completely revamped roster. A salary cap with room to play. And the return of a club legend in Benji Marshall.

For Reynolds, the arrival of Marshall is likely to have a huge impact on his role, given the one-time Tigers poster boy has made no secret of the fact he's gunning for a regular first-grade starting spot.

"I'm sure your next question is going to be: 'what happens when he goes on and you're there?'," Reynolds says with a wry smile.

Yep… indeed it was going to be.

"Ivan's already said to me you might have to jump into hooker every now and then," Reynolds admitted.

"That's fine for me. I'm not that guy who is going to turn around and say 'nah, sorry Ivan, I've come here to play five-eighth'.

There are very few outside the club and its staunch supporter base giving the Tigers a chance of ending their six-year finals drought this season.

They've added a lot of depth to a roster that was once considered too top heavy, and instilled a culture of selflessness that Cleary is renowned for instilling.

Yet, there is very little expectation that the Tigers can do much more than avoid the wooden spoon.

"Everyone's writing us off and that's sweet," Reynolds said.

"People can say what they want to say. For us as a team, we'd be silly if we're not thinking about [finals]. Who wants to be in the bottom eight? No one. I know there are guys here who are hungry and have done it all before and played semi-final footy and won grand finals.

"There was nothing worse than last year, when I was sitting at home watching teams play semi-finals. In your gut you know 'that should be me'. That hunger drives me and hopefully that drives the rest of the boys."

Reynolds has won a State of Origin series, which to this day remains the highlight of his career.

However that coveted premiership has eluded him despite two cracks at it in grand finals for the Bulldogs in 2012 and 2014.

While the Tigers aren't exactly entering a premiership window, Reynolds believes the club is on track to win its second title during the four years of his contract at the club.

"Some people say that 'oh but you've played in one'," Reynolds said reflecting on his two grand final appearances.

"And don't get me wrong, it's a mad experience. But you don't want to play in them, you want to win them. That's what it's about. People have asked me, from the bottom of your heart do you expect to win one here at the Tigers?

"And I honestly do. Who knows when it's going to be but I really think we're building something good here. Ivan knows exactly what he's doing… He's done it all before." 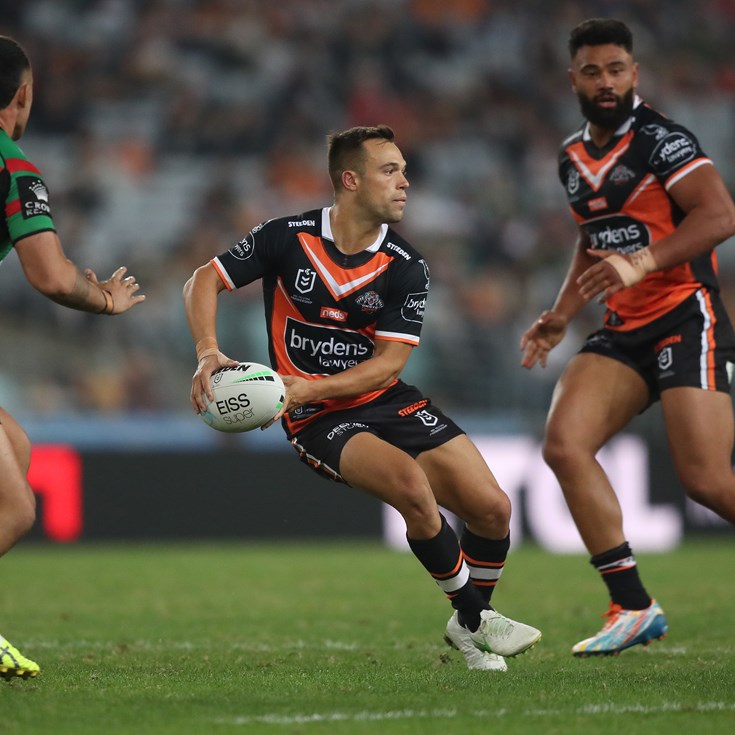 'I want to be here': Brooks insists he can lead Tigers out of decade-long mire