The Melbourne Storm juggernaut picked up where it left last season, starting their title defence with a 36-18 victory over the new-look Canterbury-Bankstown Bulldogs in Perth on Saturday night.

No Cooper Cronk, no Billy Slater, no Tohu Harris and no Jordan McLean from last year's premiership triumph for the Storm. But not even the omission of the four internationals could change the winning way of Craig Bellamy's men, who made it 14 wins on the trot in the opening game of the season.

The Bulldogs looked a far more formidable side under new coach Dean Pay than they did for the entirety of 2017, however the improvements they have made over the offseason weren't quite ready for the task of toppling the champions.

Like the Bulldogs, Kieran Foran looked sharper than he was in 2017 and his combination with Matt Frawley showed promise in an outing that should leave Canterbury fans optimistic of seeing an exciting brand of football from their team this season.

In front of a crowd of 38,824 at Perth Stadium for the opening round double header, Cameron Munster put aside a turbulent offseason to show why the Storm reign of dominance isn't over as a result of Cronk's departure to the Sydney Roosters.

Munster set up two tries in the opening half and then played a hand in the final try of the night in covering at fullback for the injured Billy Slater, who is hopeful of playing his 300th game against the Wests Tigers in Melbourne next weekend.

Pay inherited Kieran Foran. He inherited Aaron Woods. Two key decisions regarding the future of the club that were made well before his arrival at Belmore in the offseason.

But his first major decision at the club, one he made in the early weeks of preseason, was to shift Moses Mbye to fullback in the hope of finding his best position.

It was a decision that only took seconds to be justified with Mbye streaking away on a 50-metre dash with his first touch of the ball in the No.1 jersey.

Moments later, in what was one of Foran's first touches in blue and white, the halfback ran to the line and put Raymond Faitala-Mariner through a gap to give the Bulldogs an early 6-0 lead.

It was an immediate test of the reigning premiers and the leadership of skipper Cameron Smith, who for the first time in a long time looked around and saw no Slater and Cronk in a purple jersey.

It was somewhat the dawn of a new era for the Storm, so it was only fitting that Nelson-Asofa Solomona was the first to leave his mark on 2018 for Melbourne, producing a magical offload to put Ryley Jacks over under the post.

The Storm extended their lead to 12-8 when Curtis Scott dived on the loose ball from a Jacks cross-field kick, only for the Bulldogs to hit straight back when a cut-out ball from Frawley allowed Brett Morris to score in the corner.

Munster then injected himself into the contest, setting up tries for Josh Addo-Carr and Kenny Bromwich with his dynamic footwork to give the Storm a 24-12 buffer at the break.

An error from Addo-Carr trying to scoop up a loose ball gifted Matt Frawley first points of the second half with the easiest try of his short career, strolling over to reduce the margin to just one converted try with 24 minutes remaining.

The Bulldogs had all the ascendancy late in the match but against the run of play, a freakish play from Addo-Carr to steal the ball from a fumbling Mbye saw the Storm winger streak away for a near length of the field try that ended any hope of a Canterbury comeback.

Canterbury had their chances to get themselves back in the contest but Suliasi Vunivalu's late try put the result beyond doubt. 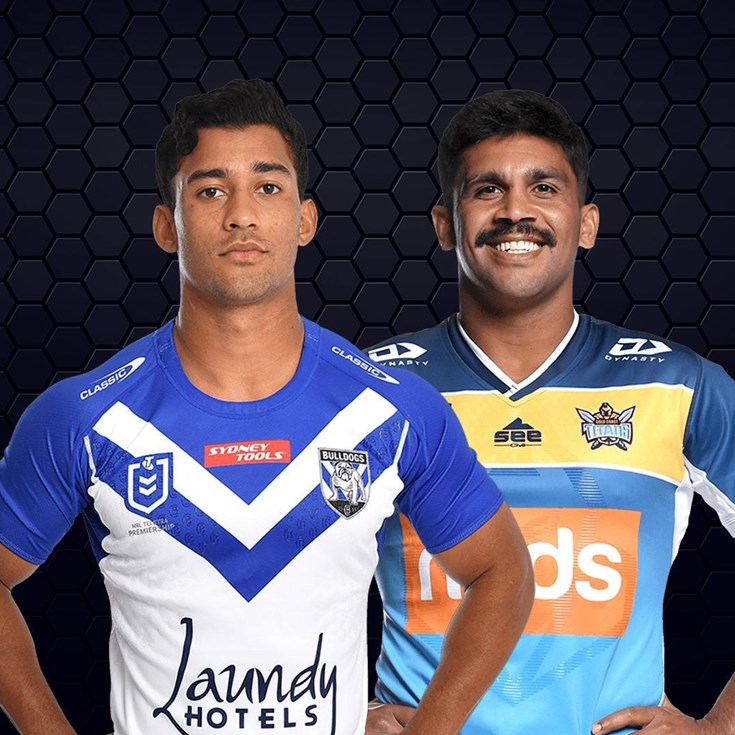 Johnson hamstrung as Sharks beat Bulldogs to surge into seventh