Ivan Cleary's axe-wielding ways have been the talk of Tiger Town of late, and Malakai Watene-Zelezniak has been one of the biggest beneficiaries.

But half a rugby league lifetime ago, Cleary was punting the same wayward talent from his first grade squad, with Watene-Zelezniak eventually walking away from the game to pick up a rugby union deal, and when that didn't pan out, work as a prison guard.

Five years after first crossing paths with his current Wests Tigers coach, Watene-Zelezniak landed a wing spot in the side's shock round one dusting of the Roosters after David Nofoaluma was dumped to reserve grade.

A few weeks earlier, fullback Tuimoala Lolohea had been dealt a similar fate after a disappointing off-season, only to shed six kilos, regain his fullback spot and boot last week's match-winning sideline conversion.

Ironically Nofoaluma's exile is set to end after one week with Lolohea reportedly grounded by a niggling knee injury for Saturday's trip to Melbourne.

Yet as a Penrith Panthers junior during Cleary's first 2012 season at the foot of the mountains, Watene-Zelezniak copped a similar reality check from the straight-laced coach, and within 18 months was all but done with his NRL dream.

"It was Ivan's first year at Penrith and he was into me and he was trying to help me," Watene-Zelezniak told NRL.com.

"It was a rude shock for me at a young age. Being dropped back to part-time after my first pre-season - I turned up for it unfit, my skinfolds were high, my attitude was wrong.

"At the time I probably thought 'why am I getting dropped back to part-time?' I look back and think 'of course, I deserved it.'

"I was coming last in fitness drills and wasn't performing. It was a massive learning curve.

"I pretty much thought everything was owed to me and I'd pretty much walk into first grade without having to put the hard yards in."

From a stint with NSW Country Eagles in Australian rugby's domestic competition, then back to Penrith and into shift work in a Sydney prison. Then playing alongside his brother in a long-awaited Panthers debut last April, ironically because Matt Moylan, Peta Hiku and Waqa Blake had been dropped for breaking curfew, to lining up against him four months later.

With Dallin and Australian Kangaroos counterpart Josh Mansour ahead of him in the Penrith pecking order, the elder Watene-Zelezniak fielded interest from the likes of Manly before making a mid-season move to Concord.

Back on Cleary's radar once more, he now has a one-year deal, has dropped nine kilos over the off-season and had originally kept Nofoaluma in reserve grade again as he was named on the wing again against the Storm. Nofoaluma looks set to get a late call-up with Lolohea likely to be ruled out due to injury.

"I was tossing and turning on a few clubs but as soon as I heard Ivan was coming to the Tigers, it made the choice easy and I knew I wanted to be a part of the rebuild here," Watene-Zelezniak said.

"I knew I could come here with a clean slate and be the player and person I wanted to be … It wasn't until I came back from rugby a few years ago that it all kind of clicked.

"I was a bit more mature mentally, and I knew the only way to make it into first grade was by training hard. That's been my focus since then and it's now paying off.

"I'm up the front in fitness these days, it's been a fair turnaround and I'm happy with my effort. It's taken a few years but I'm making the most of it now." 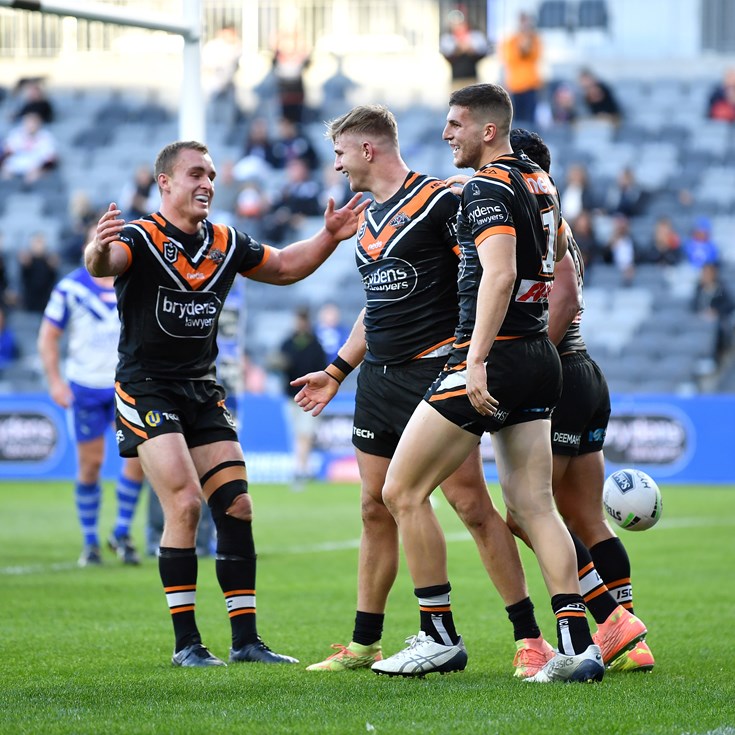