It's Ivan's bus all right. And it's Luke Brooks well and truly behind the wheel, unlike ever before in a career tipped for the fast lane as soon as he put it into gear.

All aboard. Brooks was the last of the "Big Four" on Cleary's hit list 12 months ago.

None questioned it, just as not too many questioned the Bulldogs chasing Aaron Woods and James Tedesco, the Roosters being in the hunt for the fullback too, or Parramatta luring Mitchell Moses away from his junior stomping ground.

Few asked why Brooks wasn't in the same demand. With a fifth win from six starts in 2018, Brooks now has as many victories as his three former teammates combined this year.

With Cleary in the coach's box, Brooks is calling the shots with more confidence than at any point in his 88-game Telstra Premiership career.

So much so that Cleary backed his young No.7's inclusion in the annual gabbling on NSW Origin halves.

"I think he deserves to be spoken about because he's in good form,'' Cleary said.

"The reality is there's positions up for grabs in that team, they've got a new coach in Freddie and he'll want to pick players that are in form. He's got every right to be put in the discussion.”

Brooks' show against Manly went beyond anything else produced in his five first grade seasons.

It started, as it should, with the basics. A repeat set from a grubber across his body.

In a 2016 column, just after Brooks had extended his previous Wests Tigers contract, Matty Johns wrote of the-then 21-year-old's "immense talent and potential".

Nurtured and realised, they would take him to that NSW No.7 jersey Cleary speaks of. Johns tempered the piece with "too often he allows the style of a contest to dictate his involvement".

In front of 15,546 at the famed suburban fortress where Manly had won their last seven, and the Tigers hadn't since 2003, Brooks dictated.

The next set, the grubber came again. Last year the Tigers – mainly via Brooks's left boot – were 14th in the NRL for repeat sets.

Brooks' running game came to the fore against Manly. Just as it has ever since Cleary took charge just over a year ago.

When Brooks came into grade, carting buckets of talent, a bucket of a behind and the unfortunate Andrew Johns comparisons that came with both, he was good for four runs a game.

Last year he cranked it up to six. This season it's eight. Against the Sea Eagles, Brooks finished with a round dozen.

Benji Marshall was there for the fateful 2013 debut at the SCG. He's also back five years later, with a "front row seat" to the youngster's development.

"He's matured a lot since I was here last but the one thing he was always good at when he started was running the ball and the last few weeks he's been outstanding in that arena," Marshall said.

"But now he's providing repeat sets and I don't think he's maybe feeling the pressure and expectation that he used to."

Brooks set the tone in the sixth minute, skipping and probing at the line before his kick for Chris Lawrence to open the scoring.

Another repeat set came soon enough. And so did Brooks, drawing Jake Trbojevic in, scooting around his outside and sending Kevin Naiqama away on the next successful raid.

It was that type of day for Manly, summed up whenever poor old Akuila Uate went near the ball.

So the 31st-minute defence Brooks burrowed through for a stolen try out of dummy-half, it wasn't exactly Fort Knox he was conquering to do so.

But the confidence and timing, that was something. And it's catching.

Young rake Jacob Liddle, 21 in years, 16 in first-grade games, was dummying and back-tracking his way several metres out of dummy-half near the line soon after – the type of play that draws four-letter queries from fans.

Those extra yards, with a couple of cheeky dummies, gave Brooks space and time to bait Brian Kelly in defence, and send Marshall over for the first of the veteran's two tries.

It's not like Benji needs topping up in confidence. Josh Reynolds either.

Brooks is the key for Cleary. And with him firing, and backing himself to do so, it's standing room only on the bus. 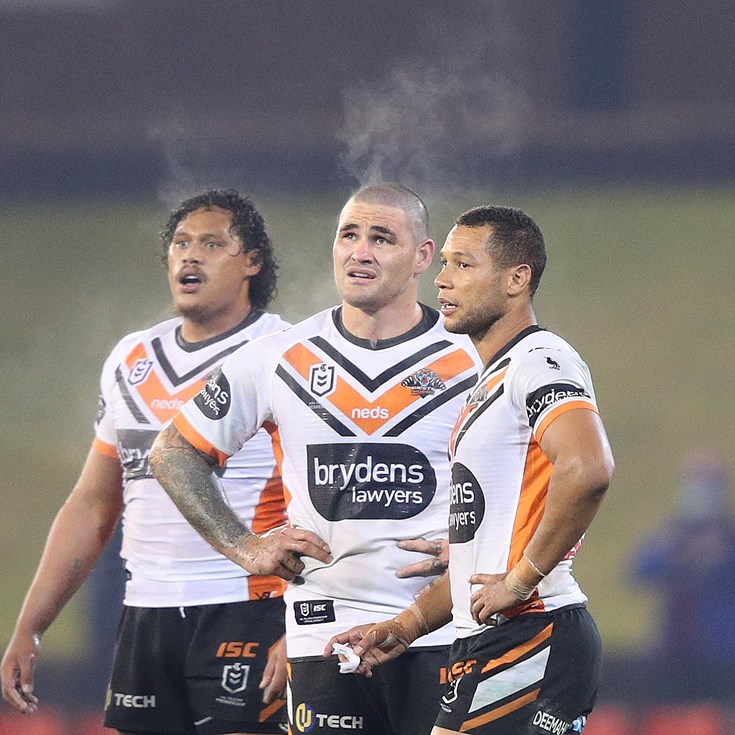 Brooks itching to reclaim No.7 jersey