Is JT too old? What are the forwards doing? Should it be Michael Morgan's team? Is Paul Green over-coaching or under-coaching? Just some of the endless questions hanging over the Cowboys' heads after slumping to their fifth straight loss last week.

Frustration is mounting by the week in Townsville and it's possible that all the speculation and theories have given the Cowboys an acute case of analysis paralysis. Can't wait to see what they produce this week because the finals are slipping away before their eyes.

Having said that, the Cowboys are probably one of the few teams in the Telstra Premiership capable of winning 10 in a row - if they ever find form.

The Titans are one of six teams with a 3-3 record after last week's road loss to Penrith. But they have a rare chance to kick the Cowboys while they're down and need to make the most of it.

Key match-up: The battle of the playmakers should be a cracker, but there could be lightning and thunder whenever Jason Taumalolo and Jai Arrow come into contact with each other. They are basically prototype forwards of the modern era, filling the role of lock while boasting the size and stamina to play anywhere in the pack. With Arrow keen to emerge on the Origin landscape in 2018, he will be hellbent on a strong display against the 10-million-dollar man.

For the Cowboys to win: Throw out the playbook and just go out and have fun - something the Cowboys have forgotten how to do. Rather than scrutinise videos of their wobbly 2018 performances, the Cowboys should watch some highlights of their improbable run through last year's final series for a timely refresher course on what makes them tick.

For the Titans to win: No more teasing with good starts and bad finishes. This team has shown it can compete with some of its more illustrious rivals but it's no good doing it in spurts. Big games from halves Ash Taylor and Kane Elgey against out of form duo Thurston and Morgan could swing the result in Gold Coast's favour.

Cowboys stat attack: The Cowboys have won their past five games against the Titans, who have not triumphed in North Queensland for six years. On the flip-side, the Cowboys are in a rare slump on home turf, losing five of their past six.

Titans stat attack: Centre Konrad Hurrell's 11 errors for the season has him at the top of the list of all NRL players. The Titans have the worst defensive record after six rounds, conceding 171 points.

And another thing: Cowboys back-rower Ethan Lowe will hit the 100-game milestone on Saturday against the Titans.

Francis Molo and Javid Bowen were omitted from an extended bench an hour before kick-off. The Cowboys' top 17 is unchanged despite their home loss to Canterbury last week.

Phillip Sami shifts from wing to centre for Dale Copley (hamstring) with Tyronne Roberts-Davis called up on the flank. Mitch Rein starts at hooker for Nathan Peats (ribs). Ryan James (suspension) returns at prop, pushing Max King to the bench where Keegan Hipgrave also replaces Ryan Simpkins. Lock Jai Arrow has been named after overcoming back spasms that ended his round six early. Brenko Lee and Brendan Elliot were cut from the extended bench an hour before kick-off. 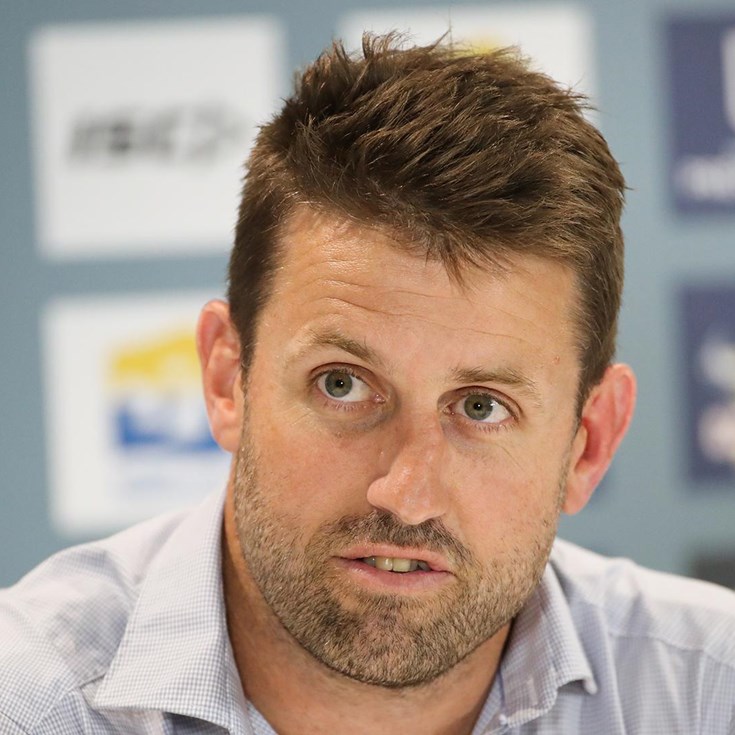