Slow starts didn't cost the Panthers in some of their earlier games but their inability to come out with guns blazing bit them on the backside in last week's loss to the Sharks, despite a strong finish.

Their only other defeat this season followed a similar script – a round three 20-18 loss to the Bulldogs.

The Panthers got it right in their round four thrashing of the Cowboys and coach Anthony Griffin would love to see some consistent 80-minute performances from his side. Revenge for the round three loss to
Canterbury should add to their motivation this week.

The Bulldogs again showed they can compete but they blew several scoring chances in last week's 6-0 loss to the Roosters, missing an opportunity to claim a big scalp.

They need to start winning if they plan on being a top eight contender.

Key match-up: After coming off second-best to his former Cronulla teammates last week, James Maloney will be keen to get back to winning this week. His battle in the halves with Bulldogs playmaker Kieran Foran is likely to have a significant impact on the result. Foran knows he has to get the Doggies firing soon or their finals hopes will be in tatters.

For the Panthers to win: For a team with injuries to so many key players, the Panthers have done well to win five of seven games. And the two games they lost were by a total of six points so they're not going too badly. The one thing they do have to improve is their worrying slow starts.

For the Bulldogs to win: The forwards have to be more consistent, but it's in the backs where the Doggies need to start clicking. Foran, Will Hopoate, Mose Mbye and the experienced Morris brothers have to start creating more scoring opportunities or the Dogs will be left behind.

Panthers stat attack: He is known as a winner and still ranks as one of the NRL's top halfbacks at the age of 31, but you take the bad with the good when you have Maloney in your side. He is easily the competition's worst offender for missed tackles (54) and also leads all players in handling errors (7).

Bulldogs stat attack: Dave Klemmer continues to do the hard yards and leads the NRL in post-contact metres (480). The Doggies got over the Panthers by 2 in round three but haven't beaten them twice in the same season since 2009.

And another thing: The Panthers have won nine of their past 10 home games and three of their past four against Canterbury. Penrith hooker Peter Wallace will play his 100th top grade game for club.

Captain and hooker Peter Wallace (neck injury) is a late withdrawal and been replaced by Sione Katoa. Wayde Egan fills the vacancy on the interchange bench. Nick Lui-Toso and Kaide Ellis were omitted from the squad on Thursday night, while Tom Eisenhuth was cut an hour before kick-off.

Canterbury are 1-17 and unchanged from last week's 6-0 loss to the Roosters. Renouf Toomaga and Matthew Frawley dropped off the bench on Thursday night, while John Olive and Rhyse Martin were cut an hour from kick-off.

Steve Turner's prediction: The Panthers head into the clash with Canterbury off the back of a five-day turnaround and with a host of stars sidelined with injury as well as a defeat last weekend to the Sharks, the depth at the foot of the mountains will be tested once again against a desperate Bulldogs team looking to register their third win of the season. After failing to score a point last weekend against the Roosters, the spotlight will once again be on the Dogs attack. Canterbury did defeat the Panthers earlier in the season but if their attack doesn't fire, it could be win number six for the home side. I'm tipping an upset - Dogs by 8. 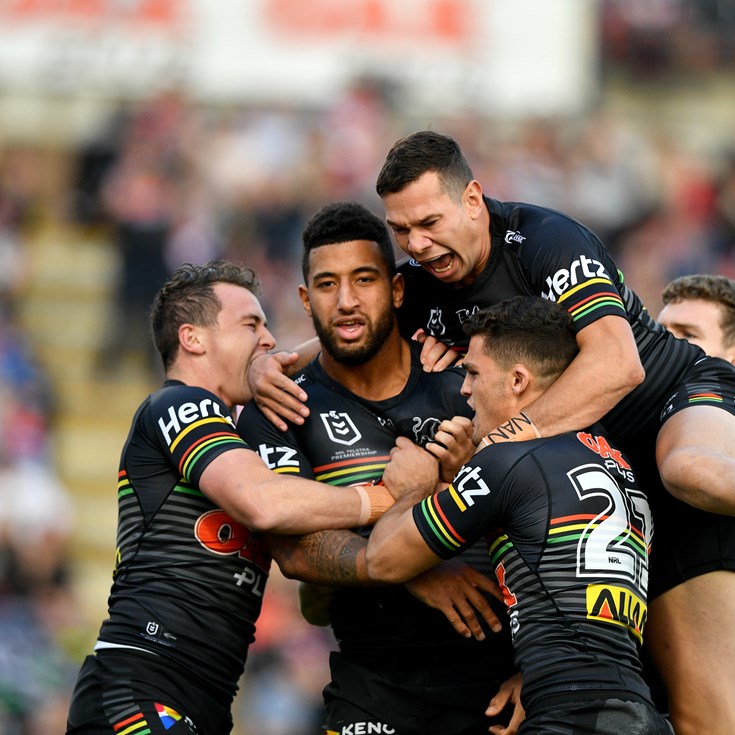 Billy the bully stars in Panthers' big win against Roosters