Newcastle centre Sione Mata'utia says the younger Knights players thrive off this unusual phrase from coach Nathan Brown as the side looks for consistency across the park.

There's no doubting the Knights have gone up a gear in 2018 on the back of nine recruits driving the club to greater heights after three consecutive wooden spoons.

Newcastle have won four games in the opening seven Telstra Premiership rounds – just one shy of their season total from last year.

But three heavy defeats to juggernaut sides Melbourne, St George Illawarra and the Roosters show there is plenty of work still needed and Mata'utia believes a lot of it comes down to the club's youth brigade stepping up more.

"When we're not playing our best it really shows in the team with the quality around us," Mata'utia told NRL.com.

"Browny speaks to the inexperienced guys about raising the water levels with a lot more quality players in the team now. He says it all the time, it's embedded in my head. It's a good saying and keeps it simple for us younger boys.

"The quality players in our side are already at a higher level so we've got to raise ours and reach them, whereas the younger guys have been a bit floating in the last couple of years.

"Lachy Fitz (Lachlan Fitzgibbon) is the best example – from where he was last year he's really raised the water levels and has been consistent with some of our new recruits."

Last-season regulars Brock Lamb and Danny Levi have found it hard to consistently remain in first grade in 2018, while the Saifiti brothers' role in the front row has reduced following the recruitment of Herman Ese'ese and Jacob Lillyman.

Mata'utia has endured a difficult past 12 months of his own, shifting from the back row to centres and dealing with the prospect of potentially never playing again after a series of concussion scares last season ruined his chances of a World Cup campaign for Samoa and potential new contract at the club over the summer.

"It's been a crazy time," Mata'utia said.

"I wouldn't say I've felt uncomfortable in the centres. But have just felt it's a process to get the combinations going.

"I haven't been making my one-on-one tackles though and at the end of the day that's my job. I'm my own worst critic and know If I'm not happy with myself then everyone else can see it."

The 21-year-old, who became the youngest player to represent Australia in 2014, wants to remain at the Knights and planned to sit down with the club again soon.

"In due time a decision will be made," Mata'utia said.

"I want to finish my career here. I'm still 21. I've got to make it hard for the club not to re-sign me. They didn't want to re-sign a player from a business perspective who may not have been able to play so that was completely understandable."

NRL.com understands the Knights are keen to retain Mata'utia now that the former international was cleared of a return, despite signing Cronulla centre Jesse Ramien in February.

"It makes it healthy," Mata'utia said of the Ramien signing.

"You see it this year how new recruits have lifted everyone. I know Jesse well and he'll add a lot. He's a competitor and I'm sure he's not the last player the club will sign." 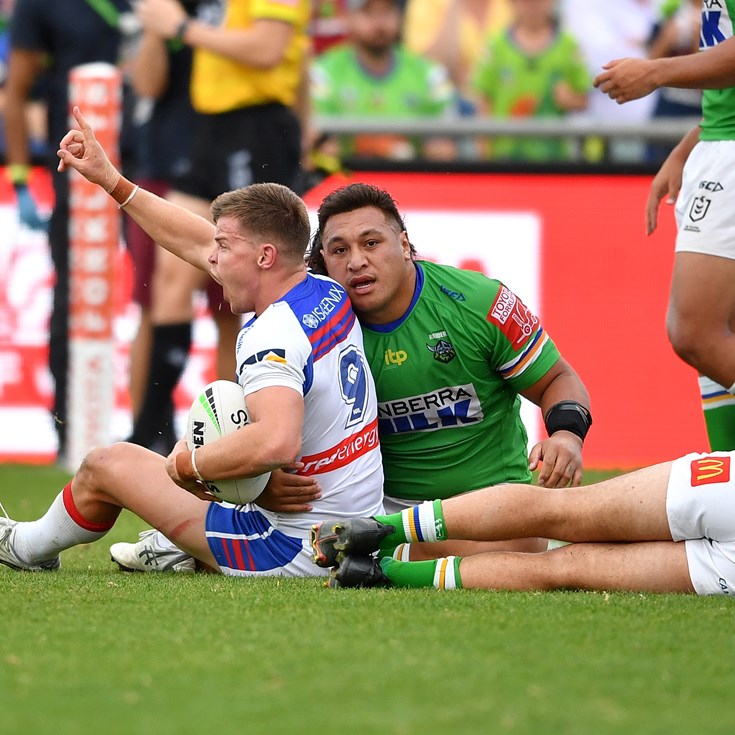 Bigger problems at play for simple changes to fix for O'Brien