The New Zealand Warriors' 26-4 win over Wests Tigers at Mt Smart Stadium has been overshadowed by injuries to stars Shaun Johnson, Issac Luke and Adam Blair.

Johnson was at his dazzling best in attack but limped off in the 70th minute with a lower leg injury. Luke was helped from the field with what appeared to be a serious shoulder injury midway through the second half and Blair finished the night with ice on an ankle.

Luke was initially at long odds to even take the field this week, having suffered a knee injury in last week's loss to the Storm and initial reports had the hooker missing up to a month.

The trio of injuries may have put celebrations on hold but there was still plenty for coach Stephen Kearney to be happy about, including a powerful opening led by hard-running props Bunty Afoa and Agnatius Paasi.

The Warriors were able to bust through in their first set of the night with David Fusitu'a only denied his 11th try of the season by a Kevin Naiqama ankle tap just two minutes into the contest.

However the NRL's leading tryscorer was in a mood and a simple shift to the right moments later saw Fusitu'a fly for the corner and open the scoring for the home side - Johnson delivering the final pass in his first game back in two weeks.

It was Fusitua's sixth try in his last five matches at Mt Smart Stadium.

Starved of possession, the visitors were on the back foot early and following a bust from Roger Tuivasa-Sheck, a professional foul from David Nofoaluma saw the Tigers reduced to 12 men with 18 minutes to play in the first half.

Blake Green quickly cashed in on the extra man, throwing a beautiful long ball to send Ken Maumalo over in the corner untouched.

Ten points down, eventually the Tigers got their hands on the ball and following a strong set Elijah Taylor almost snuck over out of dummy half, only to be denied by the video ref.

A few tackles later it was Mahe Fonua who got the Tigers on the board with a typically powerhouse finish.

The Warriors led 12-4 at the break and a second sin-binning would cost the Tigers dearly. Just seven minutes into the second half, Taylor was marched after repeated infringements by the Tigers inside the red zone.

The Tigers defence couldn't hold out a rampant Warriors' right edge forever and they eventually cracked.

A brilliant piece of play from Johnson running it on the last saw Fusitu'a stride out down the flank from 30 metres out and deliver a pass back inside to Johnson for the Warriors' third try.

Concerns for the home side came with 25 minutes to play however, when Luke left the field with a shoulder injury - making way for Karl Lawton to make his club debut.

And the former Gold Coast Titan wasted no time in getting himself acquainted with the Mt Smart faithful, slicing through some tired Tigers defence from 10 metres out to score his first try as a Warrior.

Johnson converted from beside the posts and the Warriors led 22-4 with 12 minutes play.

Lawton then ensured it would truly be a night to remember when he muscled over from dummy half for his second just minutes later.

With Johnson off the field, Solomone Kata pulled on his kicking boots, but wasn't able to add the extras.

It mattered for little in the end with the home side getting the job done 26-4.

News & Notes: Karl Lawton made a triumphant return to the same ground where he suffered an horrific broken leg in his NRL debut in 2016 ....David Fusitu'a scored 12 tries in 2017 and already has 11 in nine games this season ...This was the Warriors' first win over the Tigers since 2015 ...The Warriors have won seven games in 2018, the same number of wins they had in the entire season last year. 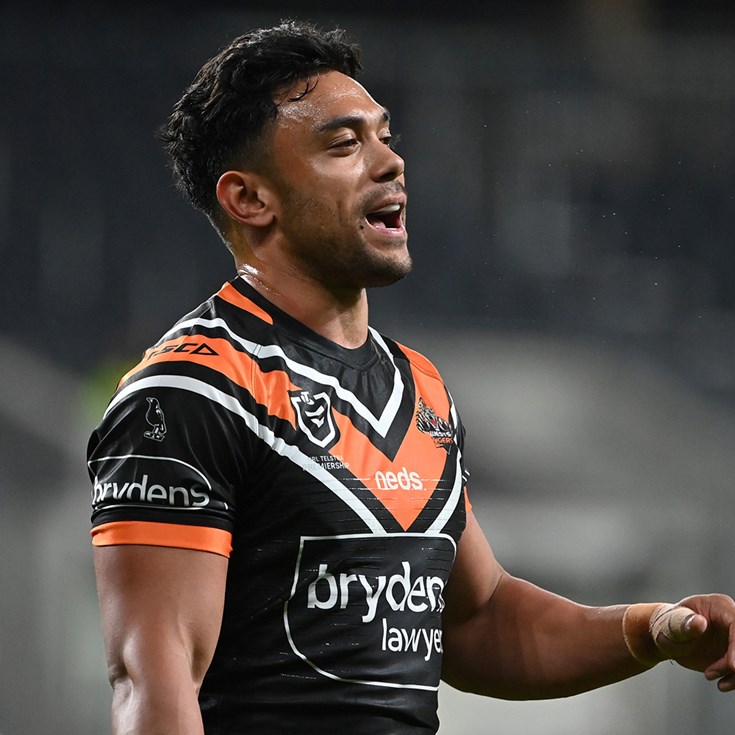