A stunning display of heavy hitting from Victor Radley – the smallest forward in the Roosters pack – has spoiled one of the biggest boilovers of the season as a desperate Manly went down 22-20 at Allianz Stadium.

Having lost four on the trot and seemingly lost the plot with myriad off-field issues and a bare-bones 21-man playing contingent to choose from, the Sea Eagles gave the heavily fancied Roosters the fright of their lives by jumping to an 10-0 lead.

With plenty of guts but not a whole lot of luck, the visitors looked set to be rewarded with a deserved upset in what proved a rough and ready contest.

And with an hour gone Radley stole the show, turning his 92-kilo frame into a heat-seeking human missile, twice whacking Kiwi Marty Taupau with thundering shots on one of the Telstra Premiership's most fearsome enforcers.

While the Roosters had by then recovered to lead 20-14, Manly still threatened to reel them in.

Radley promptly threw the kitchen sink and then some into a marginally high shot on Taupau, receiving a penalty and a gobful from the Sea Eagle with 20 kilos on him.

The rarest of Roosters commodities – a local Clovelly junior – then doubled down with a superb try-saver within the minute on Dylan Walker when he looked certain to level up proceedings.

With Radley providing the pyrotechnics, the thrills and spills flowed in a frantic final 20 minutes, Akuila Uate setting up a grand stand finish by spinning his way over the line at the 76th minute, and Daly Cherry-Evans only cranking up the tension with his sideline conversion.

The flying Fijian had earlier been denied by the officials courtesy of a dubious forward pass call, that was matched moments later when Blake Ferguson crossed at the other end, only to be called back also.

For all of Radley's goal-line bravado, Manly's first points had come from an embarrassing Roosters lapse just four minutes in, Api Koroisau steering all 118 kilos of Addin Fonua-Blake into the type of parking spot most can only dream of in the Eastern Suburbs.

The Tricolours' own goal line blushes were matched by Cherry-Evans inexplicably shanking the point-blank conversion attempt from in front – a miss as cruel as it proved costly by full-time.

Those red, white and blue blushes only darkened again when Uate burrowed over from dummy-half for a 10-point lead in as many minutes.

Ferguson kept the scorers busy as the Roosters fired their first shot, James Tedesco drawing extra men with a couple of dummies and his hulking winger turning the overlap into his fifth try of 2018.

When Manly's own goal-line defence was turned to mincemeat by Isaac Liu, carrying three Sea Eagles big men across the stripe with him, the Roosters had wrestled back a 12-10 lead in just 14 minutes.

After trading penalty goals, Walker had only 60 metres open pasture ahead of him after rushing up and forcing a fumble from Luke Keary.

A bemusing double knock-on ruling, followed by an equally confusing call to take the two by Manly, made for a 14-all ledger at the break.

That lasted all of 60 seconds upon the resumption thanks to a spilt bomb by Tom Trbojevic and a bullocking Waerea-Hargreaves try that saw Shaun Lane disappear under the wheels of the big Kiwi prop.

As Trbojevic endured an unhappy night under the high ball with three separate fumbles, Radley turned it on for the highlights reel.

With the contest exploding into life Manly did likewise, only for the Roosters defence to somehow hang on and keep themselves in the top eight.

News & Notes: The Sea Eagles' heartbreaking loss sees them start the season with two wins from nine matches for the first time since 1999... Latrell Mitchell's four-game streak of scoring at Allianz Stadium came to an end. He joins Kyle Feldt, Jorge Taufua and Cheyse Blair as equal record-holders for most consecutive tries in appearances at Moore Park... Both the Roosters and Manly hit the road next weekend, with the Tricolours heading across the ditch to face the Warriors while the Sea Eagles are taking a home game against Brisbane up to Suncorp Stadium... Crowd: 10,129. 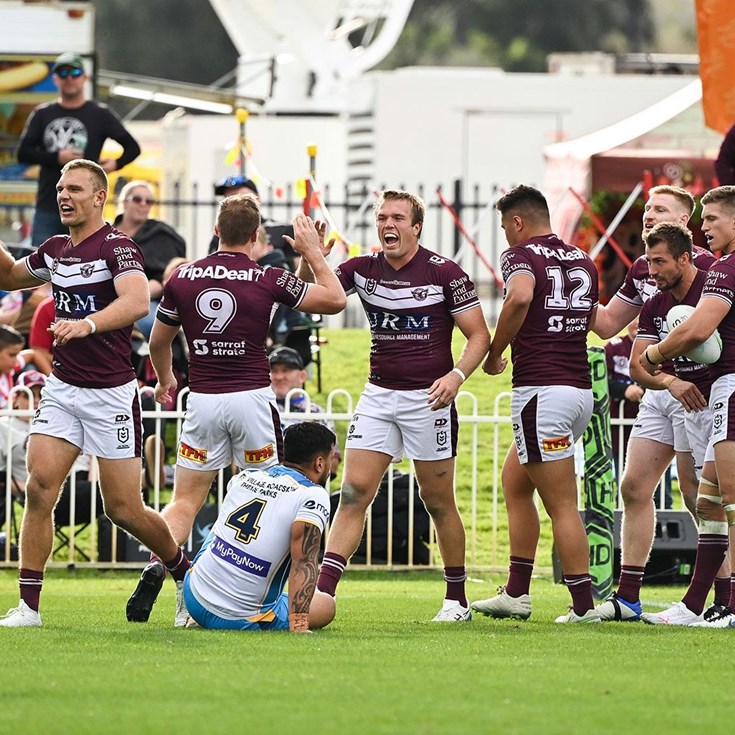